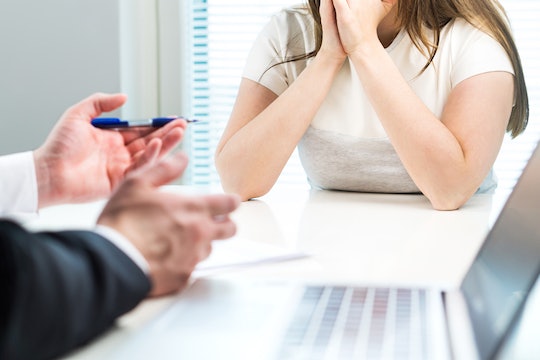 When a woman decides she wants to have a baby, this is meant to be an exciting time. Life-altering and frightening on some levels, sure, but also exciting. She has enough on her mind without worrying that this new life she's bringing into the world is going to make her career more difficult. In a perfect world, this wouldn't be a concern. But this world isn't perfect, and a new report shed light on the fact that many women are scared to tell their bosses they're pregnant for a really distressing reason.

The fifth annual report from Bright Horizons, called the Modern Family Index, shed some serious light on what the working world looks like for mothers in the modern age, and the data is troubling. It seems as though, according to the report, that the past five years have not brought about positive change for mothers in the workplace. In fact, in the past five years the number of women who are frightened to tell their bosses they're pregnant has actually nearly doubled — from 12 percent of women up to 21 percent, according to the Modern Family Index.

Why would women be scared to tell their bosses that they're expecting a baby? According to this research, it's all about the perception of mothers in the workplace.

Bright Horizons noted in its study that there was definitely a stigma surrounding the identity of mothers in the workplace. Specifically the report noted that 41 percent of employed Americans perceive working moms to be less devoted to their work, and 38 percent judge working moms for needing a more flexible schedule.

No wonder women are nervous to tell their bosses they're pregnant. On the flip side of that coin, the study found that men were almost never penalized for having children. In fact, according to the report, 72 percent of both working moms and dads agree that women are penalized in their careers for starting families, while men are not

This idea that women will be less productive and more challenging as employees once they have children is diametrically opposed to another element of the study — people who were surveyed were incredibly positive about the benefits working mothers bring to their employers on the whole.

The study found that 91 percent of Americans believe working mothers make for excellent leaders, and a further 89 percent said they think mothers in the workforce bring out the best in other employees. In fact, 85 percent felt that motherhood uniquely prepares women for being better leaders at work, 55 percent feel mothers are better listeners, and 51 percent think mothers remain calmer in a crisis.

Unfortunately all of these positive attributes don't seem to be enough to combat the persistent idea that motherhood will impede career performance. According to the report, 19 percent of working mothers worry they won’t be viewed as leaders, 69 percent of working Americans say that mom in the workplace are more likely to be passed up for a new job than other employees, and 82 percent of working moms say there are barriers that prevent them from becoming leaders.

Women are having fewer children every year, according to Forbes, and there have been people in the past who have questioned why. Perhaps if we stop holding mothers down at work and start supporting them this might not be as serious a concern. Because it's not exactly fair to expect women to have more babies and then tell her she's not an effective employee on account of those babies, is it?