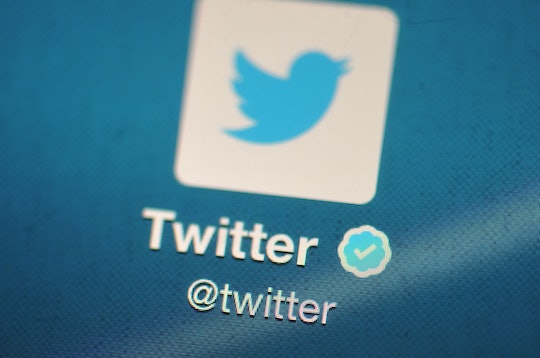 Silence can be the loudest, most powerful tool in a woman's arsenal. Especially in a case of female solidarity, when silence feels like the only tool to help another woman be properly heard. Such was the case of actress Rose McGowan, whose Twitter feed was temporarily suspended as she spoke out against sexual harassment. In a show of perfect, beautiful solidarity with McGowan, women boycotted Twitter for one day. And as is so often the case, their silence effected change.

The powerful social media platform saw thousands of women boycott its site on Friday in the aftermath of shutting down McGowan's Twitter feed. The actress alleged that she had been raped by studio executive "H.W." widely believed to be disgraced Miramax executive Harvey Weinstein.

Romper has reached out to Weinstein regarding these allegations and is awaiting a reply.

McGowan, who was one of dozens of women in Hollywood to speak out in the past week against Weinstein, alleging decades of sexual harassment, was using Twitter as a platform to call out male Hollywood stars and executives. Men she alleged knew of Weinstein's behavior and turned a blind eye again and again. After calling out several heavy hitters in Hollywood like Ben Affleck and Matt Damon, McGowan's Twitter feed was suspended.

While Twitter quickly explained that McGowan's account was temporarily suspended for violating their terms of service. She allegedly shared a personal phone number, something President Trump did when he shared Sen. Lindsay Graham's phone number in August and continued to tweet without impediment, but I digress. Women across the country decided they were fed up with Twitter's lax response to sexual predators and bullies using its site to harass people or promote hate speech. And so, women decided to be silent on Twitter all day Friday. To show their solidarity not only with Rose McGowan, but with every woman who has been sexually harassed, assaulted, minimized, or made to feel afraid.

The idea to boycott Twitter came from software engineer Kelly Ellis, who wrote in a tweet on Thursday:

Twitter took note of the silence, and on Saturday Twitter co-founder and CEO Jack Dorsey tweeted that the company would be performing an overhaul of its harassment policies, a move many felt was vastly overdue.

Today we saw voices silencing themselves and voices speaking out because we’re *still* not doing enough. We decided to take a more aggressive stance in our rules and how we enforce them. New rules around: unwanted sexual advances, non-consensual nudity, hate symbols, violent groups, and tweets that glorifies violence.

Twitter has come under fire several times in recent years for allowing harassment and hate speech to slide; during the 2016 election, the platform became a feeding ground for racist and anti-Semitic speech.

In July, reality star Rob Kardashian was suspended from Instagram for sharing nude photos of ex-girlfriend Blac Chyna without her permission, yet was allowed to continue his behavior on Twitter.

Clearly it was time for a change. And all it took was a day of pointed silence from women to make it happen.

Although not everyone thought silence was the best response. As some Twitter users noted, the women who were accusing Harvey Weinstein of allegedly sexually harassing them were forced to live in silence for years. Silence was the problem, silence was a torment to be endured, an insidious trap that allowed sexual predators to victimize other women.

But this time around, it seems that silence was the key to unlock a door. To a new way of being heard, to affecting change. To standing with other women and letting them know that they are believed, that they are not alone.

Sometimes, it seems, silence is the best way to be heard.