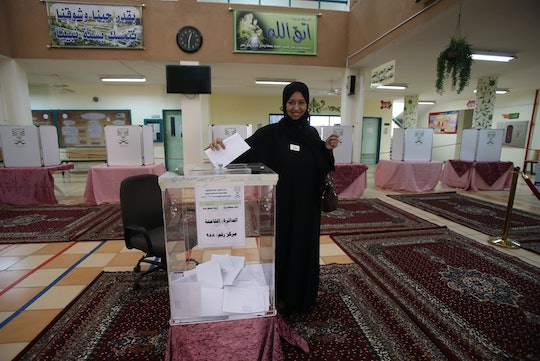 Women Win In Saudi Arabia Election For The First Time, & Here's Why That's So Huge

Women were outnumbered 6:1 in the election, according to Agence France-Presse, with 900 women competing against over 5,500 male candidates for a total of 284 available council seats. Of course, the women weren't just fighting against odds, but years of exclusivity and sexism, steeped in a steadfast culture that isn't too big on change.

Sahar Hassan Naseif, a women's rights activist working in the Red Sea city of Jeddah, told AFP, "Even if it was only one woman, we're really proud of that. Honestly, we weren't expecting anyone to win."

Naseif wasn't the only individual surprised and excited about the election outcomes. Individuals took to social media to express their delight and astonishment.

From tweeting the unexpected election updates...

...to Saudi women tweeting pictures of themselves after they voted for the first time in their lives.

Whether the win was expected or not, it ushers in a new age for Saudi women, offering new possibilities for an otherwise marginalized population that just wants the opportunity to serve their communities. Saudi Arabia has some of the toughest restrictions on women in the entire world, including a ban on driving. Hopefully, now that women can vote and hold political offices, these and other injustices will see their end, like requiring women to gain permission from their male family members to travel, marry and even work. And even though women were allowed to participate and be included in this year's Saudi Arabia municipal elections, many faced harsh criticism and even violence because of their choice to exercise their new right.

Abdullah al-Maiteb, a male voter, told the Associated Press when asked if his wife was voting: “Her role is not in such places. Her role is at home, managing the house and raising a new generation. If we allow her out of the house to do such business, who is going to take care of my sons?”

Women and men were segregated during the voting process, and women could not be seen by men or meet men face-to-face when casting their ballot. 424 female-only polling booths were set-up across the country in order to accommodate.

Clearly, there is more work to be done.

But for now, it's time for an appropriate and completely over-indulgent happy dance. Way to go, ladies! The world is celebrating with you.