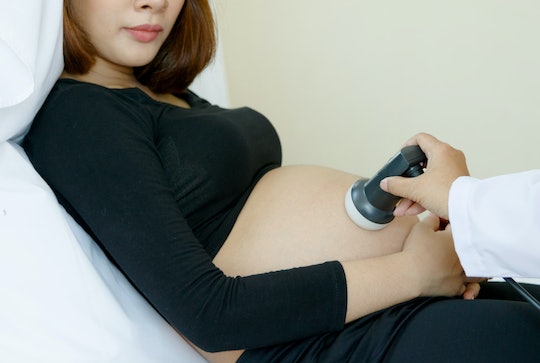 Study: Women With PCOS Are Likely To Experience A Faster Decline In Egg Supply

There was a time in my life when I had no idea what PCOS was, but I knew women who struggled with the symptoms. Irregular periods, weight gain no matter what they did to combat it, hair growth on their faces. It was incredibly upsetting for these women to deal with, particularly when they didn't fully understand what was going on. Now, of course, they know. But these symptoms aren't the only issues when it comes to Polycystic ovary syndrome, according to a new study. Women with PCOS are likely to experience a faster decline in egg supply. Which adds a new level of heartbreak for PCOS sufferers.

According to Women's Health, PCOS is surprisingly common. One out of every 10 women in childbearing years struggles with this health problem. PCOS is "caused by an imbalance of reproductive hormones. The hormonal imbalance creates problems in the ovaries. The ovaries make the egg that is released each month as part of a healthy menstrual cycle. With PCOS, the egg may not develop as it should or it may not be released during ovulation as it should be." Some of the symptoms for PCOS include weight gain, fatigue, unwanted facial hair, thinning hair, and infertility.

A recent study by researchers at the Department of Obstetrics, Gynecology, and Reproductive Sciences at the University of California San Francisco School of Medicine, San Francisco, California looked at how PCOS could affect a woman's egg supply. According to the study published in Fertility and Sterility, that it has been a long held belief that women with PCOS tend to have children later in life because they "enjoy an extended window of fertility as compared to their regularly ovulating counterparts." With this belief in mind, a medical team studied 31 women with PCOS against a control group of 266. They were trying to understand rates of egg depletion in women with PCOS as compared to women who did not show any symptoms.

When the results for the study were analyzed, researchers made an unfortunate discovery. They found that women with PCOS experience faster rates of decline in antimüllerian hormone (AMH), a key hormone that serves as a marker of a woman’s ovarian reserve, or relative egg supply.

Researchers noted that "ovarian aging dictates reproductive lifespan, which has implications for both fertility and timing of menopause, as well, in turn, the long-term health of women." The study also went on to acknowledge how little is known about any factors that could influence a decline in ovarian reserves.

September is PCOS awareness month, which is incredibly important considering how many women walked around for years with PCOS completely unaware of what their symptoms meant. A full 70 percent of sufferers, in fact. While there is no cure for PCOS at present, at the very least women who want to have children who are diagnosed with PCOS can seek out fertility treatments. Because forewarned is forearmed. And if PCOS causes a faster decline in egg supply as this study suggests, time could very well be of the essence unfortunately.