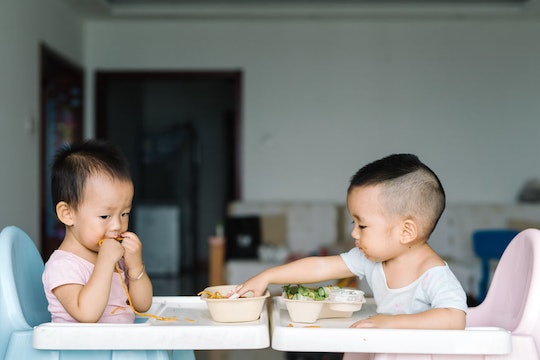 There's no question that there are some truly fascinating things going on between twins during pregnancy. Ultrasound videos have captured twins holding hands, fighting for leg room, and even kissing... which suggests that the classic twin love/hate relationship thing is already in full swing by the time they're born. Indeed, the stage could be set in utero for decades of sibling rivalry in more ways than you think: A recent study found that girls who share a womb with boys make less money than those with twin sisters. (What is going on in there, exactly?)

Conducted by behavioral economist Krzysztof Karbownik at Emory University in Atlanta, biological anthropologist Christopher Kuzawa at Northwestern University in Evanston, Illinois, and other experts, the study analyzed the birth data of nearly 730,000 births between 1967 and 1978 in Norway (including 13,800 twin births). The results were surprising, as Science magazine reported: Women who had a male twin were 15.2 percent less likely to graduate from high school, 3.9 percent less likely to finish college, and 11.7 percent less likely to be married when compared to women with a twin sister, even controlling for such factors such as level of maternal education and birth weight. Overall, women with twin brothers earned 8.6 percent less money and even had 5.8 percent fewer children, according to the Proceedings of the National Academy of Sciences.

Maybe you're thinking the real reason that women with twin brothers seem to fall behind has more to do with their brother's influence in the many years following birth, or even differences in the way these women are treated by their parents when compared to their brothers. But interestingly, when researchers looked at the eventual results for women whose twin brother "died either during childbirth or very shortly after," it was found that these 583 women had "virtually the same life outcomes" as the women with living male twins.

Why? Experts aren't entirely certain, but the leading theory blames exposure to the male sex hormone testosterone in utero as the cause for these lifelong imbalances.

"This is a story about the biology of sex differences," study co-author David Figlio, dean of Northwestern's School of Education and Social Policy, was quoted as saying by CBS News.

"We are not showing that exposed females are necessarily more 'male-like,' but our findings are consistent with the idea that passive exposure to prenatal testosterone changes women's education, labor market and fertility outcomes."

As Science explained, a male fetus usually starts to produce "massive amounts of testosterone" at about 8 to 9 weeks gestation. This "helps jump-start the development of male reproductive organs and brain architecture."

In general, female fetuses receive "only modest amounts" of testosterone; however, in male-female twins, "small amounts of the male fetus’s testosterone can seep into the female twin’s separate amniotic sac."

As for what the testosterone does to the female fetus once it gets into that amniotic sac, researchers aren't sure how the hormone is responsible for what seems to be a diminished capacity to earn money. But it's worth pointing out that males exposed in utero to a female twin had "similar long-term outcomes as males exposed in utero to a male co-twin" (or to put it another way, men are seemingly immune to the negative affects of something that can mess with women's entire lives).

Maybe when the experts pin down exactly how testosterone puts female fetuses at a disadvantage, we can find a way to even the scales... maybe.