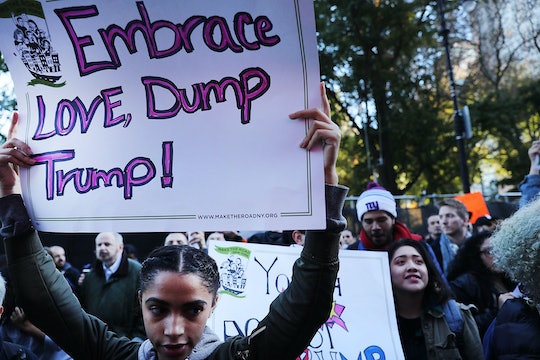 It started as a thought. A despondent, frustrated grandmother and retired attorney in Hawaii, watching the election results come in on Nov. 8 and realizing that Donald Trump would be the next President of the United States. Teresa Shook of Hana, Hawaii, took to Facebook with an idea. "I think we should march on Washington." And that idea gave birth to a bona fide movement. A movement you are going to want to commemorate with Women's March t-shirts and merchandise. Because if there is something in this world we should celebrate, it's this: one voice in a vacuum can still make a difference.

Of course, the Women's March on Washington snowballed pretty quickly after Shook went to bed that night; women across the country (and, indeed, across the continent) were desperately searching for a way to make their voices heard. Not only by President-elect Donald Trump, who ran one of the most divisive and misogynistic presidential campaigns in living memory against Democratic nominee Hillary Clinton, but they wanted to be heard by all of the decision-makers in Washington. Politicians who are already taking steps towards defunding Planned Parenthood. Politicians who want to dismantle the Affordable Care Act. Politicians who stand behind incoming Attorney General Jeff Sessions, an anti-abortion senator from Alabama. Women everywhere latched on to Shook's idea of marching on Washington the day after the presidential inauguration, and word spread. As of last count, an estimated 400,000 women are expected to march on Washington on Jan. 21.

And so, a movement was born.

For those of you who can't make it to Washington, there is some pretty great Women's March merchandise available on their website. Unfortunately, the deadline to receive your Women's March t-shirt before Jan. 21 has passed.

Not only are there official Women's March t-shirts available, but The Outrage has designed t-shirts, jackets, hats, tote bags, and even a "Wild Feminist" onesie to support the movement. All proceeds from the sale of Women's March merchandise from The Outrage will go to providing transportation to women who want to march but can't afford to get there on their own.

Activists, protesters, mothers, daughters, sisters, friends, grandmothers... all will be welcome and embraced at the march, which begins at 10 a.m. the day after Trump officially takes office. Women's March on Washington co-founder Tamika Mallory pointed out to NPR that this march is:

...not anti-Trump. This is pro-women. This is a continuation of a struggle women have been dealing with for a very long time. In this moment, we are connecting and being as loud as possible.

As Nobel Prize winner and women's rights activist Malala Yousafzai once said: "If one man can destroy everything, why can't one girl change it?"