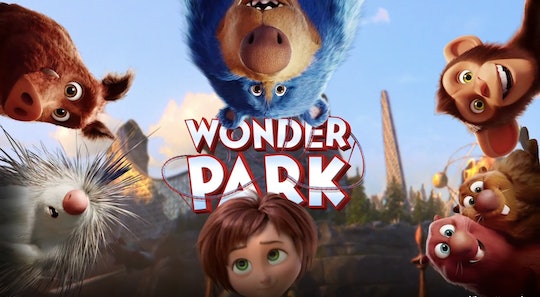 If you're looking for a little magic and imagination in your life, you're in luck. This Friday, March 15, the whimsical animated film Wonder Park premieres in theaters. Before you settle in your seat with a bucket of popcorn, you may be curious about the voices behind Wonder Park's main characters. Many of them you'll definitely be familiar with, but there is at least one talented newcomer to the production you'll want to keep on your radar.

In an exclusive look at the team in the movie shared with Romper, moviegoers will first meet the actress behind the film's lead character, a young girl named June. There's also a monkey named Peanut, a prickly porcupine named Steve, and, among others, there's also a pair of spunky beavers that will definitely have you laughing. Basically you and your kids are going to be obsessed with this animated film.

But, what else can you expect from Wonder Park? According to Variety, Wonder Park tells the story of a young girl (that's June) who goes through some "hardships" early on in life and sadly loses her "creative spark growing up." But, June ultimately discovers "a magnificent amusement park" with vibrant colors, talking animals, and more, and then her imagination "comes alive," according to the film's IMDb page.

So without further ado, please enjoy this exclusive look at the spunky and fun team you and your family will fall in love with when you see Wonder Park.

In the clip, you can see how much fun the actors had making Wonder Park — and as Ken Jeong says, it seems like "the ultimate family film."

"Wonder Park is about this girl June who thinks up an amusement park and it ends up coming to life. Like the rides, characters, everything," the 15-year-old star says in the clip.

"My character Gus is a beaver and he has a brother named Cooper," Thompson explains. "They're in the maintenance department, so if anything's broken, they're the first to get out there and fix it."

Jeong goes on to explain that while those beavers are "really well-intentioned" to fix any problems, he thinks they're a little limited by their "manic energy."

You didn't see him in the clip, but you'll be delighted to hear that the Matthew Broderick lends his voice to the film as June's dad, Mr. Bailey.

Norbet Leo Butz stars at Peanut in Wonder Park, who the actor says is a "really fascinating little monkey."

"He loves his work and his filled with endless, boundless energy for the park," Butz says in the clip.

If you know John Oliver from Last Week Tonight and sneak peeks at the new live-action version of Lion King, you'll be amped for his character as Steve in Wonder Park. "I play Steve the porcupine, he's not Captain Fun Time," Oliver says of his character. "But he provides foundation for fun. And what's more fun at the end of the day than a solid foundation?"

And what's more fun than an amusement park full of talking animals and imagination? Be sure to catch more of these fun characters when Wonder Park hits theaters this Friday.