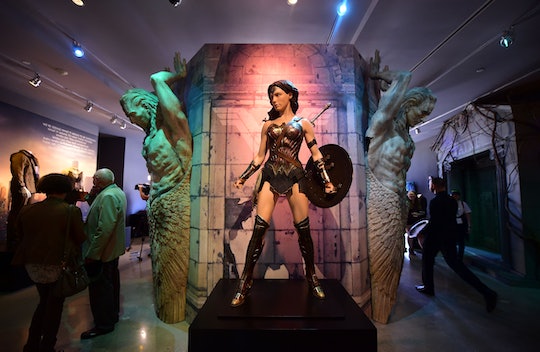 Wonder Woman has been my best friend since I was four years old. Back when I wore my Wonder Woman Underoos like they were clothes, used our extension cord to fashion a Lasso of Truth that I belted to my hip, and my mom's bangles as cuffs. Point being, I've been waiting for the cycle to come back around to Wonder Woman for years and guess what? It has come around. Finally, we are seeing a grand resurgence of the Ultimate Feminist Superhero, specifically on the big screen. Only one tiny problem: the entirety of the Wonder Woman film writing team are men, and I am seriously not down with that.

When I read the news that listed Allan Heinberg and Geoff Johns as the main screenwriters (with story credit going to Heinberg and Zac Snyder), my first thought was "Nope. Uh-uh. I'm not loving this." Sure, Heinberg is a pretty serious Wonder Woman afficianado, with five issues of DC Comics Wonder Woman series under his belt, not to mention his work for rival Marvel's Young Avengers. And we all know about Zac Snyder (Man of Steel, Watchmen, Justice League). Geoff Johns is DC Comics chief creative officer, so yes, they all have some pretty intense street cred. These are the Fan Boys of Fan Boys, the guys you never want to go up against for Trivia Night. They have the resumes, the proven track records, the fan bases, and the knowledge.

But do you know what they don't have? Vaginas.

I'm sorry-not-sorry, but if there was ever a movie that needed a female writer, it's Wonder Woman. Because she is like, the woman, you know? And I'm not suggesting all of the writers would have to be women (diversity is a great thing, people), but I find it incredibly difficult to believe there was not a single, suitable female writer who would have been an asset to the screenwriting team in all the known universe.

The comic book universes, all of them, have long been overwhelmingly focused on men. Not just the Fan Boys who seem to need their female characters to be clad in as little as possible and generally have lesser powers than the men (unless they are sexy powers, of course). But the main characters are almost always men. In fact, Wonder Woman is one of the only female heroes who wasn't just a watered-down version of her male counterpart in a short skirt (Bat Girl, Super Girl, etc.). Wonder Woman got to be strong and brave and powerful and just all on her own. And bonus: She was, legitimately, OG.

So why is it we are again seeing men write the story of a woman? Sure, the movie is being directed by a woman (Patty Jenkins, who directed Monster, Five, and episodes of Arrested Development), and she is reportedly very focused on making sure there are plenty of female cast members. And I realize we are all supposed to be celebrating because, as this Twitter user pointed out:

But it's simply not enough progress for the 21st century to say, "Aren't you gals happy, we let you direct a movie about a lady! Pretty swell, huh?" We can do better. Because there are some of us who are Fan Girls too. Some of us who grew up on comic books (prancing around the neighborhood in our amazing Underoos and red towel capes), who continue to live with half a toe in That Other World, so we get it. We can find a female writer who can tell the story of Princess Diana and the warrior women who raised her. A writer who might even avoid the traditional, "Look, she found a man and now she's happy!" storyline I'm already half-expecting. There is such a female writer out there, guys. In fact, there are thousands of them.

And they deserved a fair chance.