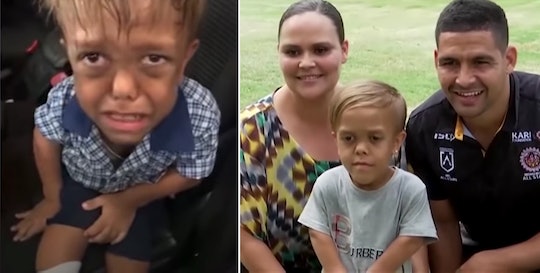 Warning: This article contains language about suicidal thoughts, which some may find triggering.

Quaden Bayles is a little boy in Australia who has suffered from bullying most of his life and his mother had enough. In a desperate attempt to show the true damage of what bullying does to a child, Yarraka Bayles posted a devastating video of her son saying he "wants to die." And now the rest of the world is rallying around the bullied 9-year-old boy in an effort to let him know that he's loved and is not alone.

Quaden's mother explained in a Facebook Live video on Tuesday that he's been struggling in the school system for years with bullying, having been targeted in large part due to his dwarfism. In the video, Quaden is crying when his mother picks him up from school and saying he "just wants to die right now," an issue his mother says has come up several times in the past.

Quaden is only 9 years old and his mother explained in the video that her son "is suicidal almost every single day... I've got to constantly keep my eye on him because of the suicide attempts." She went public with the video because she wants people to educate children on disabilities, but the video seems to have gone further than that.

It has been viewed more than 16 million times since it was first posted, and people around the world are standing up to show their support for Quaden. People like Hugh Jackman, a fellow Australian and actor who played Wolverine from X-Men, who shared a personal message with the little boy on Twitter where he told him, "You're stronger than you know, mate."

American comedian Brad Williams, who was also born with dwarfism, saw the video and decided to start a Go Fund Me page to help the young boy and his family visit Disneyland in California to "show this little boy he is loved," as he wrote on Twitter. Williams had a goal of $10,000, but in just one day more than $257,000 was raised for Quaden. Any excess money will be donated to anti-bullying charities, according to Williams.

Matt Roloff from TLC's Little People, Big World, who was also born with dwarfism, also reached out to Quaden on Instagram. "Let Quaden (and his mom) know they are welcome to swing by Roloff farms for a full VIP tour and some encouragement on how wonderful being a little person can be," he wrote.

Back in Australia, Quaden has been invited to lead the Indigenous All-Star football team onto the field on Saturday for a game, which is especially significant as the little boy is indigenous himself.

Quaden has received messages from people around the world on social media, other children who have suffered from bullying themselves as well as adults who want him to know there's hope.

The internet can be a dark and terrible place sometimes, this we know for sure. But in this case, people all over the world came to the defense of a little boy who seemed to feel very low in an effort to lift him up.