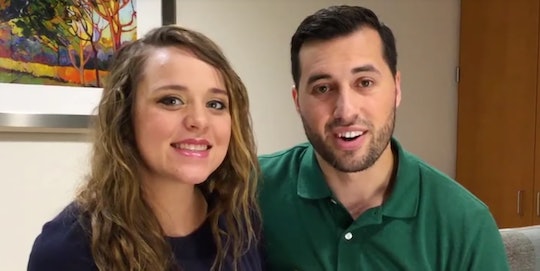 Psst! You Can Hire Jinger Duggar For $60 To Record A Special Video Message For You

Jinger Duggar has practically grown up in front of cameras while filming her family's reality shows on TLC, 19 Kids and Counting and then Counting On. Now, though, she's doing some brand-new camera work in a personalized way just for her fans. In fact, you can hire Jinger Duggar to record a video message for you on Cameo for a very reasonable price.

Jinger isn't afraid to share her life on her Instagram account or with the cameras of Counting On. And, because of this, people might feel like they actually know her. They have seen her document her life as a new mom to her 11-month-old daughter, Felicity, and have watched her go through major changes as she moved to California with her husband, Jeremy Vuolo. But now that connection can go both ways.

On Tuesday, Jinger announced that she is now on Cameo, a website where people can hire celebrities to record personal 30 second messages for them. Anyone can now contact Jinger through the website to have her record a super specialized gift to them for a pretty reasonable price of $60.

"I'm so happy to be on Cameo, and I would love to record videos for friends, family, and co-workers, for birthdays, anniversaries, and whatever it may be," Jinger said in her introduction on the website.

The possibilities for presents for your Duggar-obsessed friends and family members are endless. Just think about how much fun it would be to have Jinger wish your TLC-obsessed mom a happy birthday or congratulate her on her anniversary. Not only is it the best gift ever, but the receiver of the message gets bragging rights that a Duggar said their name. It's kind of impossible to go wrong with a gift like this.

Purchasing the custom video is super easy. All fans have to do is fill out a simple form on the website letting Jinger know who the video is for and what they would like her to say in the video. From there, they just have to enter in their credit card number and the video will be delivered to them in a few short days.

And $60 is practically a bargain for a video from Jinger that comes from the heart. Especially since some celebrities charge a lot of money for a shout out on the website, according to the New York Post. Caitlyn Jenner charges $2,500 for a shout out while Jersey Shore star and mom of three, Nicole "Snooki" Polizzi charges $300 for a video wishing someone a happy birthday.

Judging by Jinger's huge Instagram following (she has 1.1 million followers), you would think that people know her on a very friendly level. Especially since her comments are filled with people commenting (and sometimes criticizing) about all aspects of her life. But it makes sense why people feel so close to her — Jinger (who is 25) has had her life taped on camera since she was just 10 years old, according to In Touch Weekly, and fans have watched her grow up right in front of their eyes.

Those same people who have grown up with her can now get a super meaningful gift from her, which is so nice. Instead of requesting something from Amazon for every birthday, consider asking friends and family for a video message from Jinger Duggar. It will definitely be a gift that will be hard to beat for years to come.