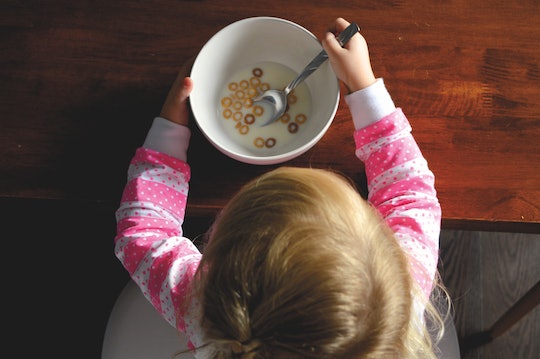 You May Be Able To Predict Asthma & Allergies By Age 1, Study Finds

Doctors have long understood that babies with certain skin conditions are more likely to develop food allergies or asthma as they get older. However, for a variety of reasons, spotting exactly which children could develop allergies — and working out the best way to lower their chances of developing a life-threatening sensitivity — has proven difficult for medical providers. For parents, that uncertainty can mean living in a minefield: interpreting food labels, learning how to spot breathing troubles, and living with the agony of not knowing exactly whether an allergen could trigger an illness — or even a trip to the emergency room. But results from a new study suggest that it might be possible to predict asthma and allergies in kids by as early as their first birthday. How? By looking for a combination of early signals, rather than just one, according to experts.

According to a Science Daily report on the research findings, babies with atopic dermatitis (also known as eczema) have been known to have greater risk of developing food allergies or asthma later on. In fact, the progression from baby eczema to food allergies, hay fever, and asthma has been seen in so many children over time that providers now refer to it as the atopic march, according to the American Academy of Asthma, Allergy & Immunology.

But this latest study found that simply having eczema wasn’t enough to raise a child’s risk of developing asthma or a food allergy. Researchers found that progression only happened when the child was also sensitized to an allergen — meaning, when exposed to a substance it considers abnormal, their immune systems produced antibodies and other symptoms or reactions.

And given the scale of the study, the observation could prove especially promising when it comes to spotting kids in danger of serious reactions. The researchers used data from more than 2,300 children who participated in the Canadian Healthy Infant Longitudinal Development (CHILD) Study, one of the world’s largest longitudinal studies focused on following the same set of kids and parents from before birth through childhood, according to the CHILD website.

Maxwell Tran, who authored the study and is now studying medicine at the University of Toronto, explained that the findings could offer a more practical option for practitioners looking to help parents understand whether their child could have a heightened response.

Our findings are useful to help predict which children may develop asthma and allergies. There are certain genetic variants that we know are risk factors for allergy, but genotyping is not widely used in clinical practice, so this research offers healthcare professionals an alternative method of identifying at-risk children.

The findings were published this week in the Journal of Allergy and Clinical Immunology.

Considered the most common chronic disease in children, asthma is on the rise in the United States and doctors aren’t exactly sure why. The latest statistics put the prevalence of asthma in kids at about one in 10 — up from 1 in 14 in 2001 — and it’s the third leading cause of hospitalizations in children, according to the American Lung Association. Food allergies are on the rise, too; data from the Centers for Disease Control and Prevention show that food allergies increased 18% among children under age 18 years between 1997 and 2007, and that food allergies sent around 9,500 children to the hospital each year.

And that’s where things often get complicated for parents. If a family has a history of asthma or allergies, knowing when and how to expose young kids to potential allergens can be nerve-wracking. It might even feel safer to avoid the most common allergens until well after age 2 or 3, but CHILD study researchers said their findings supported the latest guidelines from the AAAAI: exposing kids to things like peanuts, eggs, and cow’s milk earlier, not later, is actually the safer course.

So, the takeaway for parents is that doctors can’t look at one single predictor when determining whether a child will develop a food allergy or asthma. Instead, practitioners might want to look for a couple of things happening at the same time: if a child has eczema and shows an allergic sensitivity to a substance (through skin-prick testing, for example), or has a family history, there may be good reason to think they may develop other conditions as they get older, according to these findings. And it also means parents and practitioners could now have a better road map for giving kids effective treatment and the tools to control their symptoms.