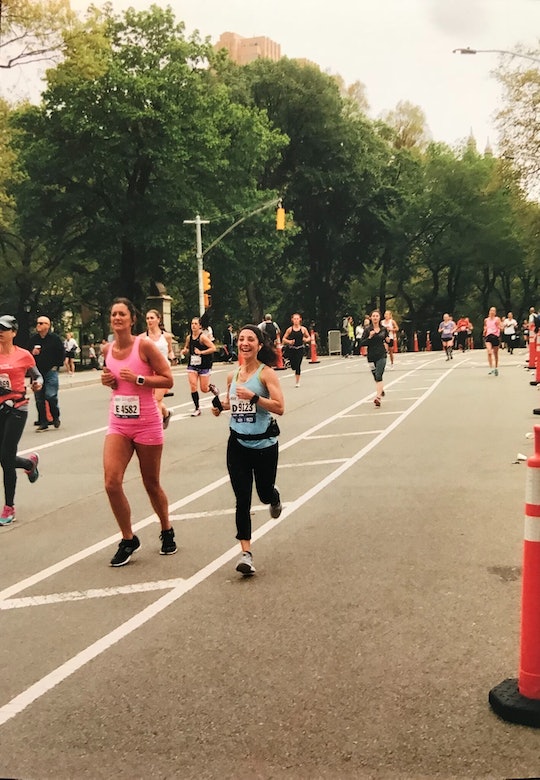 You Really Can Run Through Your Whole Pregnancy, So Why Does Everyone Say You Can't?

If you want to feel social judgment smack you like a wall of icy wind, try doing something outrageous as a pregnant person, like buying a bottle of wine or surfing. Outsize reactions to your belly-button piercing reveals a lot about how society views motherhood. For instance, I once went for a hike with a six-month belly, and a tourist scolded me for not wearing a hat. "The sun makes the baby sick, and it will be your fault when it gets cancer," he said. But what I heard was: "You're supposed to be inside watching television for two — and also, I failed tenth grade science." This attitude is especially pervasive when it comes to running. Doctors say that you can run through pregnancy, and even that it is good for you, but you're likely to meet an enthusiastic crowd of naysayers if you do it.

While we wait for the parody Instagram account — Crazy Things Strangers Say To Pregnant Ladies, maybe — let's talk about what happens when you and your unborn baby head out for a morning jog, and what it really means when people pelt your awesome display of athleticism with uninformed shade.

I felt like a bad-ass running a half marathon in general. Running it pregnant? I felt like I could take on the world.

Once upon a time, running too far was rumored to make your uterus fall out. Sadly, female organs remained a contraindication for exercise for centuries. In the 1800s, maternity clothes didn't exist. Women wore aprons to cover any "gaps," according to The Huffington Post, and generally stayed indoors. (A halter maternity tankini top, a la A Pea in the Pod, wasn't even a twinkle in a seamstress's eye.) In the 1900s, when women increasingly joined the workforce, someone had a eureka moment and started making roomier dresses. Nevertheless, public opinion still favored the barefoot-in-the-kitchen, televsion-for-two model of human gestation.

"By the 1950s, you had maternity clothes, but they were infantile, with these big bows. It wasn't something you'd go to work in, because no one was expecting you'd work while pregnant," explains Randi Hutter Epstein, M.D., author of the childbirth history Get Me Out, in our interview. And working out? No one expected you to do that either.

In 1967, a high-school basketball coach told Katherine Switzer that an “excessive number of jump balls could displace the uterus,” reported Outside Magazine. Undaunted, Switzer became the first woman to complete the Boston Marathon. Her uterus is right where she left it.

Then in January 2017, Serena Williams won the Australian Open while pregnant, and Kerri Walsh Jennings scored a gold in beach volleyball at the 2012 Olympics during her first trimester, according to The New Yorker. (I won a gold medal in cookie eating myself. My mother was so proud.) Then there was coverage of marathoner Kara Goucher, who, as The New York Times reported, continued to average 55 miles a week while expecting. Awareness of the capabilities of pregnant athletes has been slowly spreading.

But it's not just professional athletes who run through pregnancy.

Jaime Maser, Founder of Maser Communications, ran a half-marathon at 5-and-a-half months pregnant, and finished a 3-mile run on the day she went into labor. If her doctor had discouraged her from running, she says, it would've been a red flag. Running is a huge part of who she is — and holding onto that felt crucially important.

"Every year in New York, there's Shape's Women's Half-Marathon. The Central Park course is a pain, but I love it," she tells me. Her doctor told her to listen to her body when she ran the course in 2016, and that she'd probably need to take bathroom breaks.

In 2017, she ran the course again — this time, she nursed at the finish line.

"My husband and son were there, and I breastfed at the finish line," she says. "It was uncomfortable, but I felt like a bad-ass running a half marathon in general. Running it pregnant? I felt like I could take on the world."

For Maser, running was a way to disconnect from worry and re-connect with her body. Running is also one of the few things pregnant women can do without restrictions. "When you're at a gym, you realize there are some moves you can't do. But running is running. Your feet hitting the pavement," she says.

Today, Maser's in awe of what the female body can do. "Now, when I see people competing while pregnant, I get so emotional."

"Pregnant women are definitely seen as delicate and frail," observes Joanie Johnson, Co-Founder of the Fit Pregnancy Club, in an interview with Romper. "Some care-providers are still telling women not to raise their heart rate above 140 beats per minute, or lift anything heavy."

For Johnson, a mishmash of half-baked guidelines, misinformation, and fear-mongering all too often discourages women from exercising at all — so the myth perpetuates itself.

I encourage my ladies to exercise.

Though highly athletic, Johnson herself was treated as if she were breakable during pregnancy, everywhere from group workout classes to massage places. But at FPC, pregnant women come to seriously sweat. Johnson believes that strengthening your body leads to a healthier pregnancy, delivery, and postpartum period. And the science supports her.

Dr. Kecia Gaither is an OB-GYN and maternal-fetal medicine specialist. She maintains that exercise in pregnancy readies your body for labor, increases your energy, and improves muscle tone. For diabetics, exercise can help regulate blood sugar. "So I encourage my ladies to exercise," she says.

When I ask why people continue to think pregnant women are supposed to take a 9-month rest, despite the clear benefits of cardiovascular exercise, she answers, "Old wives' tales. It comes right along with the idea that if you're carrying high, you're having a boy. You know, these things can be hard to shake."

Pregnant women care deeply about their unborn babies, and go to great lengths to protect them. So wouldn't you assume, as a bystander, that whatever a pregnant lady's doing, she's got this?

Megan Casper, M.S., RDN, author of the blog Nourished Bite, ran, lifted weights, and cross-trained throughout her pregnancy. "My doctor definitely gave me really crazed eyes when I told her I was still running, but then you see the recommendations and it turns out to be perfectly fine," she tells me. Running is absolutely fine — but that doesn't mean it's easy.

"At the beginning, I was nauseous and I couldn't breathe," says Casper. "Then she dropped onto the bladder, and I felt this weird pressure with every little jump."

Casper kept running, because it made her feel great — like Wonder Woman, she says. By summer of 2016, she was hitting the boardwalk in shorts and a tank top (without the 1950s pussy bow). "Sure, I got some odd stares, but screw the haters." She also started surfing just before her daughter was born — and that's when she hit the wall of social judgment.

"I didn't surf surf," she explains. "But I'd still put the wetsuit on and paddle into the ocean on a short board. My bump was underwater, so there was zero pressure on the baby. That's when I got the worst looks."

"But no one worries about their body like a pregnant person," I jump in. "So where do they get off?"

"That's what I'm saying," she agrees. "No one worries like a pregnant person. On the subway, I'd cover my face with a scarf. Because of germs."

Pregnant women care deeply about their unborn babies, and go to great lengths to protect them. So wouldn't you assume, as a bystander, that whatever a pregnant lady's doing, she's got this? Why do so many feel the urge to judge pregnant women in general, and active pregnant women in particular?

Seemingly, it's a mystery with roots in the days when uteruses hit the pavement on the regular — but in fact, the desire to judge pregnant women goes even deeper, according to Epstein.

"When I first started working on my book, I was thinking, when did we become such control freaks? Thinking about the way we exercise and eat, trying to make sure the baby's perfect." Epstein assumed she'd be able to pin down a particular decade — the '70s, maybe. "But actually, it's been always. You read diaries of pregnant women from 100 years ago, and if she miscarried, no matter how smart she is, it's — wait, was I too tense? Did I eat the wrong things?"

When someone raises an eyebrow at your running habit, they're not worrying about your unborn baby. "It's just being judgmental. Maybe it has to do with people's own insecurity," muses Epstein. "We try so hard to control pregnancy, and we judge other women, but it's all leading to parenthood — and that's just so completely uncontrollable."

Such irony's been with us for time immemorial, and it's not going anywhere fast.

More Like This
A Mother’s Day Garden Of Grief
All Your Questions About Getting Pregnant After A Tummy Tuck Answered
Is Glycolic Acid Safe During Pregnancy? A Dermatologist Explains
A C-Section Actually Doesn't Take As Long As You Think, According To Experts