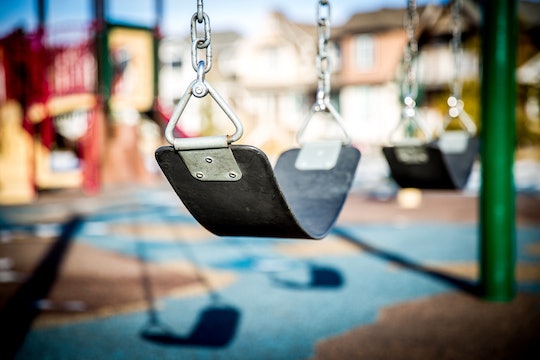 Even though most schools are out for the summer, a surprisingly common issue faces many schools throughout the country — and some lawmakers are working over the summer break to change it before schools reopen for the fall. Most parents don't realize that schools ban teachers from giving students sunscreen — it seems like such a random and arbitrary decision, and yet it's widely enforced in most schools around the country, according to PBS Newshour.

This may not seem like such a big deal, but if your child burns easily in the sun, you can understand why sunscreen is actually a crucial school supply for even just a half hour of recess outside. Sure, kids could wear long sleeves and pants to school for those outdoor field trips on sunny days, but that does nothing to protect your child's face or head — and many school dress codes ban hats.

But thanks to U.S. Food and Drug Administration regulations from 2011, sunscreen is considered an over-the-counter medication, and thus requires a doctor's note for students to even bring a bottle of it to school, let alone apply it themselves or have a teacher apply it on them. Swap out the word "sunscreen" for "Advil" or "inhaler" and it's the same exact scenario, despite how absurd a doctor's note for sunscreen might sound.

The American Academy of Pediatrics recommends that all children over the age of 6 should wear SPF 15+ sunscreen on sunny and cloudy days, and that children should limit their sun exposure during peak times between the hours of 10 a.m. and 4 p.m. For most children, they're in school during those hours, but things like gym class, recess, and school trips can certainly bring them outside during these hours. And just because it's a cloudy day doesn't mean your child can't get sunburnt.

At my son's preschool, his teachers advise that he come to school already wearing sunscreen. I hadn't thought much of it, and packed a bottle of sunscreen in his book bag, only to find it there unused even on sunny days. Since learning about how most schools ban sunscreen without a doctor's note, it all makes more sense — even though on a broader scale, it kind of doesn't make sense.

Many states are working to make sunscreen more widely available, specifically with lawmakers tackling the issue of sunscreen in schools. Take for example Utah State Rep. Craig Hall: Utah has the highest rates of melanoma in the United States. While the CDC reported that melanoma is the third most common skin cancer, it is however the deadliest. The American Cancer Society also reported that melanoma risk factors include frequent sunburns in childhood. For Hall, preventing sunburns in school-aged children in a personal mission, too: He's the father of four redheaded children.

Other states are making sunscreen available to the general public. Last year, the state of Massachusetts installed free public sunscreen dispensers at several locations throughout the state, including Boston Common. The free public sunscreen program has expanded nationally and continues to come to more and more cities. Just as kids need their umbrellas and galoshes for rainy days, it's important students can easily access proper weather gear like sunscreen for those sunny days on the playground, too.