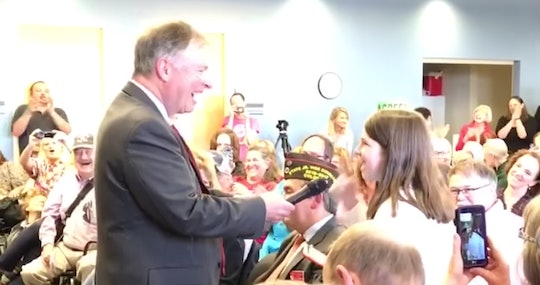 Are you ready to watch the best video of the week? Forget about the goat parkour compilation you watched or any envy-enducing cookie-baking videos you drooled over, because I have a video that will have you doing internal fist bumps and give you hope for humanity. On Wednesday, a young girl invited her climate-denying congressman to her science class, and luckily for those of us who weren't at Rep. Doug Lamborn's town hall in Colorado Springs, someone got the exchange on camera.

According to the Center for American Progress, The Mountain Mail reported in 2013 that Lamborn said there were "a lot of contentious facts and claims about global warming and whether it is man made," despite consensus from 97 percent of climate scientists that humans' actions are driving climate change. According to Mother Jones, he pledged to oppose any climate legislation that would earn the government more revenue, and he once said that "the federal government should not cripple our economy and burgeoning domestic energy industry with more onerous fees and regulations."

To one little girl named Haven, that just didn't sound right, and she asked for the mic at Lamborn's recent town hall. "You don't want to pursue renewable energy, but please reconsider," she said. She then hit him with this very logical combo-wombo, making the argument for retraining unemployed people for climate-friendly jobs while also saving the environment:

Solar and wind jobs are a great fit for new veterans. The U.S. Department of Energy even has a program called Solar Ready Vets to help them transition into solar careers, and wind turbine service technician is going to be the fastest-growing job category in the U.S. by 2024.

"Why do you continue to support creating coal mining jobs when it's a career that endangers its workers and makes them sick?" she asked. "Also, I'd like to invite you to my science class next Friday. We're doing a presentation on climate change!"

The room rightfully exploded into applause, with several audience members beaming. Lamborn told Haven that he supported an energy policy that used hydrocarbons, nuclear, hydropower, and solar, and that he wanted "all kinds of job opportunities" for veterans. Unfortunately, Lamborn's spokesperson told Mother Jones that Lamborn would not be attending Haven's science class, since he would be out of town next Friday.

Haven is just one of the many recent stories emerging of kids taking politicians to town over climate inaction. Children are suing the government in both India and the United States in order to have their rights to a healthy future recognized, and they're educating adults on climate change in attitude-filled PSAs.

Here's to seeing more kids get involved in the civic process and advocate fearlessly for themselves. Because seeing kids like Haven stand up for themselves gives me nothing but hope for the future.