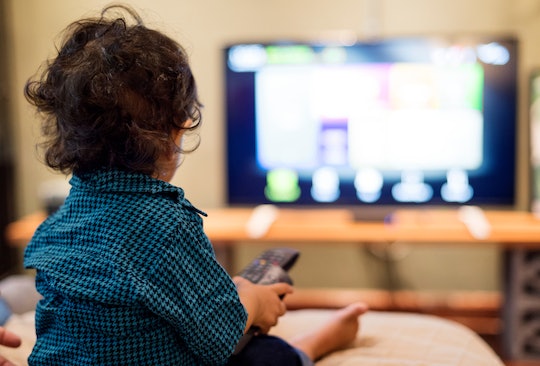 Every week it seems like there's a new study about kids and screen time. Sometimes it's a cautionary tale about how terrible screen time is for your kids, sometimes it's a bit more measured and there will be a study that encourages parents to just use moderation. Whatever the study is telling parents, it doesn't appear to be making much of a difference. Because young kids' screen time has doubled in recent years, and here's what that could potentially mean.

A new article in JAMA Pediatrics from the Child Development Supplement Panel Study of Income Dynamics at the University of Michigan looked at parent diary data between 1997 and 2014 to see how much screen time has increased with kids, and they saw the most marked change in children under the age of 2. In 1997, the average toddler watched about 1.32 hours of television in a day. By the year 2014, that number had jumped to 3.05 hours a day (although television only accounts for 2.5 of those hours since there are so many more potential screens to be watching compared to 1997). Despite the fact that there are so many other screens, with iPads and smart phones and laptops in almost every home, television watching did increase significantly as well, as CNN reported.

For toddlers between the ages of 3 and 5, screen times didn't change much but their time in front of the television did, doubling from one hour to two hours between 1997 and 2014. Which seems curious, considering there wasn't a big shift in how much time they were hanging out in front of screens in the interim 17 years. After all, in 1997 there were computers and video games as well as television. Why the leap? Lead author of the study and parent WeiWei Chen, who is an assistant professor at Florida International University, was curious as well. She told CNN:

I'm curious as a parent, as well as a researcher, to understand how much time our kids spend nowadays on smartphones, iPads, TV, and all kinds of screens.

Pediatrician Dr. Wendy Sue Swanson of Seattle Children's Hospital thinks she understands why kids might be spending more time in front of the television; their parents are getting busier all the time. As she told CNN:

When we're busy and we're working a couple of jobs or are overwhelmed or are a single parent, the television is so effective at holding our child's attention and making it easier on our household.

While screen time might be on the rise, parents shouldn't necessarily panic. Everything in moderation tends to be a pretty good rule of thumb, and it's also important to remember that parents are human who might need a break sometimes too. This January study from the Royal College of Paediatrics and Child Health in the UK found that screen time isn't inherently bad for children, as long as parents are paying close attention to other parts of their kids' lives as well, as per The Guardian. Of course there's a flip side to that coin; the American Academy of Pediatrics recommends that children 18 months and under avoid all screen time, gradually working their way up to around one hour a day for kids aged 2 to 5.

At the end of the day, parents still need to make the right decision for their individual child. Let's not forget that screens can be valuable teaching methods as well as entertainment. So use your best judgment, folks. That's all a person can really do.

More Like This
10 Baby’s First Christmas Outfits Cute Enough To Save For Their Kids
Why Won't My Baby Take A Pacifier? A Pediatrician Explains
Cry-It-Out: The Popular Sleep Training Method, Explained
The Best Toys For 6-Month-Olds Will Do More Than Just Keep Them Occupied