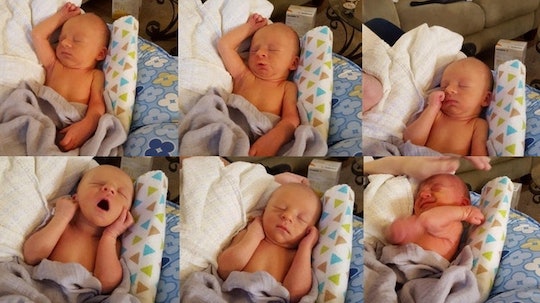 The Many Stages Of Your Pooping Baby's Face & What They Mean

On the many late nights and long days sitting with my babies and watching them explore their new world, there are a number of interesting things I have noticed. One in particular sticks out in my mind as ever-changing: Their different facial expressions especially when it came to the reoccurring dreaded bodily function that resulted in me spending hundreds of dollars in diapers ... poop. Baby's pooping faces and their meanings never cease to baffle me. When at some point I began to notice a pattern and could read my babys' digestive track based on the faces they were making, I knew there had to be some psychology behind it. And apparently, I'm not the only one.

Reddit user, stickykarrot, noticed the same reoccurrences in his son's baby's poop faces and even went as far as to document it in a post. It sparked a lot of interesting conversation too. For instance, some commenters were curious about the sounds that occurred with each expression, thinking there might be some semblance with their own children. Others commented on the hilariousness. And of course there is my personal favorite, the commenter who named each of the six faces in the photo by the coined grief stages: "denial, anger, bargaining, depression, acceptance, and poop."

Despite the laughs and speculation, it's surprising to find out that your baby's poop faces (and expressions in general) do actually have some meaning behind them, according The Bump's interview with professor of psychology and author of The Philosophical Baby: What Children's Minds Tell Us About Truth, Love, and the Meaning of Life, Alison Gopnik.

If you, too, are trying to decode the emotions that your baby is going through during one of their diaper-dirtying episodes, let us help you break down the meaning behind some of the elaborate faces babies make while pooping.