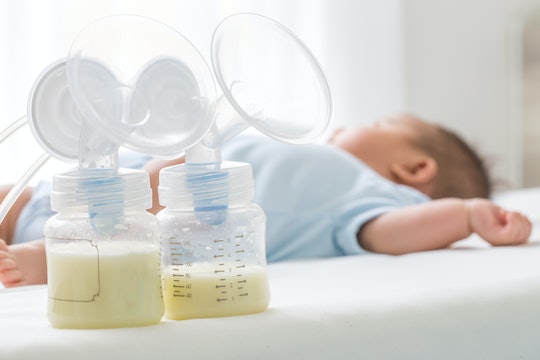 If you're a nursing mom, you've probably been told by your pediatrician that the best thing you can do when your baby is sick is to keep on breastfeeding. But did you know that in addition to providing your ailing little one with the antibodies and calories she needs to get well, nursing can actually tip you off to the fact that she's sick in the first place? It's true: Your breast milk can even be the first red flag that your baby has the flu.

You might have seen a viral photo on Facebook illustrating this fact. Posted by Paige Peterson, a mom whose baby daughter Raina had recently tested positive for flu, the pic shows two bags of breast milk, side by side: One that was pumped a couple of weeks before her daughter fell ill, and one that was pumped over the weekend when Raina got sick. As Peterson wrote in her caption, she "didn't believe the nurse when she told me because she hasn't had any symptoms of flu that I have noticed." Peterson never gave her daughter Tamiflu, and apparently wasn't suffering from the flu herself. If not for the positive swab, she might never have known Raina had the bug. Yet the difference between the two pouches of milk reveals the truth:

See that incredible difference in color? As a study in Pediatric Research confirmed, “immunilogic factors in breast milk [can] change in response to nursing infants’ infection.” But the fascinating part is that while Peterson didn't even know her baby was sick when Raina tested positive for the flu, her body somehow did (and was already working to combat the virus). Since Raina wasn't showing any symptoms, Peterson's breast milk was actually the first sign that her baby had the flu. So what should you be looking for in your own breast milk if you're worried your baby might come down with something? And how does your body figure this stuff out without you even knowing?

If your breast milk suddenly looks like it did right after your baby was born, when you were producing nutrient-dense colostrum (otherwise known as "liquid gold"), it could be a pretty solid tip-off that something is up.

"Not only is it possible, it's even probable, that when a breastfeeding mother or her breastfeeding baby becomes ill, the appearance of the breast milk being produced changes," Jamil Abdur-Rahman, M.D., board-certified OB-GYN and Chairman of Obstetrics and Gynecology at Vista East Medical Center in Waukegan, Illinois, told SELF.

Doctor Abdur-Rahman went on to explain that whenever a bodily fluid contains a high amount of white blood cells, "it will assume a yellowish color." And as the American Association of Pregnancy explains on its website, yellowish colostrum is also high in protein, fat-soluble vitamins, and minerals — all things your baby will need to stay strong and fight the flu. Peterson is far from the first mom to notice that her breast milk looked different when her baby was sick, naturally. A couple of years ago, mom Mallory Smothers also had a viral sensation on her hands when she posted an almost identical side-by-side comparison photo to the one Peterson posted:

Amazing. Smothers also brings up a fascinating aspect of this bodily process in her post: The backwash theory. As a result of their investigations into how a mother's body knows when her baby is sick and adjusts her milk accordingly, some scientists believe that breast milk's immune-boosting properties may depend in part on the "backwash" (a mix of milk and saliva) that flows back into the breast when a baby is nursing, causing a mother's body to "create made-to-order immune factors that are delivered back to the baby in milk," as reported by Science News.

All of this said, if your breastmilk appears more daffodil-tinted than usual but your baby seems to be feeling fine, there's not necessarily any reason to panic. And if you're not in the habit of pumping, there's no need to start just so you can keep tabs on the color of your milk.

"A lot of moms will never notice color changes in their breast milk because they pump infrequently or not at all," certified lactation consultant Danielle Downs Spradlin, IBCLC, CLC, tells Romper.

"Food dyes in mom’s diet can impact milk color too. Milk doesn’t have to change color in order to have a higher concentration of certain protective factors."

So no matter where your breastmilk falls on the color spectrum, you can rest assured that your body is calibrating its nutritional value to meet your baby's exact needs at that moment. But while, as we said, there's no need to freak out over a new hue, it is flu season — so if you do notice something different, it couldn't hurt to keep your eyes open for other potential symptoms.