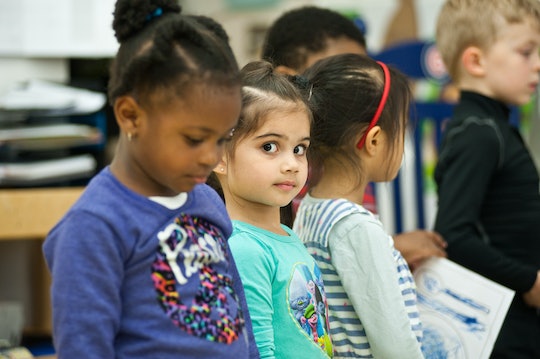 What My Fellow White Moms Get Wrong About Diversity In Schools

I was sitting on my daughter’s bed one evening, reading her a bedtime story. She picked the story of Ruby Bridges, the first black child to integrate an all-white Southern elementary school in 1960 amongst a violent backlash. The children’s version of the book is honest, but also hopeful. My daughter attends a diverse elementary school, with a mix of students from all backgrounds, a high immigrant and refugee population, and many multiracial families just like ours. She remarks to me as we finish the book that she is glad things aren’t the way they used to be anymore.

I cringe a little as she says this. I love her childhood optimism, and I love that her “normal” is a world where Ruby Bridges is a thing of the past. The truth is, though, that the school we chose for our children took a lot of work to find. A truly diverse school is more a rarity in America today than it was in the 1960s. I have often heard white friends reference a 90 percent black district as “really diverse,” but that is not what the word diverse actually means. White people use “diverse” to mean “not white,” but in reality the word denotes an actual mix of backgrounds and ethnicities. A 90 percent white, or 90 percent black, school is not diverse. It is, in actuality, segregated.

According to a 2013 report by Economic Policy Institute, black students are more isolated in their schools today than they were in 1963. Formal school segregation is of course illegal in 2018, but subtle unwritten social rules dictate otherwise. In addition, the after-effects of generations of enslavement and segregation reach into today’s world. Decades of redlining in real estate leave us with de facto segregated neighborhoods. The mortgage discrimination of the first half of the 20th century created “hazardous” neighborhoods, and many of those today are still low-income, under-resourced, with failing schools and little opportunity. Those neighborhoods are also still primarily comprised of residents of color. And those residents often cannot just break free and move to the upper-middle-class white school district. The cycle perpetuates, as students from failing schools created by segregation raise their children in the same failing schools that white parents have the economic mobility to steer clear of.

The discussion becomes even more complicated when recent information about “academic tracking” shows a bias among school administrators regarding those they refer to honors tracks. The honors track in most diverse schools is overwhelmingly white, thus leading to an ever-widening achievement gap between white students and students of color.

When this topic is broached among a group of white suburban moms, many are shocked. Yes, they are aware their school is extremely white. Many overestimate the diversity, but they are not oblivious to the fact that it is pretty pale in their school.

But (gasp), that is not why they chose it. They insist.

For many this is true. While plenty of white families choose white schools for reasons of prejudice, just as many other choose white schools because they want “good” schools, “safe” schools, “high-ranked” schools. None of these things are bad in and of themselves. As parents we all want what is best for our children. It is, however, problematic when the desire for what is “best” for our kids perpetuates stereotypes, segregation, and the continued stratification of our society.

The subtle attitudes and coded language that fellow white moms use to describe more diverse schools indicates the deep-seated prejudices and stereotypes that many are not even aware that they hold. When we chose our diverse school district and excitedly announced our home purchase on social media, I received a slew of messages from white friends (whose children have never attended our school) that the school tested low, “had a lot of student problems and immigrants,” was poor, was dangerous, and would fail my children. Words were lobbed at me such as ghetto, thugs, bad crowd, druggies, and latchkey kids. Our experience at our school has been nothing but positive, and yet many suburban moms still arch an eyebrow when I tell them which school my children attend. These attitudes, biases, and fears are what is keeping schools more segregated than ever before. White parents do not want to send their children to Black schools, but do they ever really think about why?

This American Life examined the why in their series “The Problem We All Live With.” Yet sadly, the parents who most need to examine this subject are least likely to listen. When we are in a place of comfort, we rarely challenge ourselves our our thought processes. For parents in a high-performing, well-funded, and desired public school, they have little motivation to examine school inequality. For the parents whose children are getting left behind, though, it is often all they can think about.

Choose to take a risk on a public school that doesn’t fit your mold of 'desirable.' Examine why.

So what can we do as moms? The evidence is overwhelming that school segregation, educational discrimination, and the achievement gap are very real things. Once we become aware of this knowledge, and let it seep in that our white children are often receiving a higher quality education, how do we act?

Choose to take a risk on a public school that doesn’t fit your mold of “desirable.” Examine why. Choose to be involved in that school — be vocal, be active. Advocate for all of the kids, not just your own (as author Margaret Hagerman put it to The Atlantic's Joe Pinsker, "When we think about parents calling up the school and demanding that their child have the best math teacher, what does that mean for the kids who don’t get the best math teacher?"). Stand in that gap. Use your privilege and your voice to talk to the Department of Education at the state and federal level. Find your state here.

Talk to your white kids about race. Read them Ruby Bridges and other books about race. Talk about segregation. Ask them to examine their school, and their friends, and think about why it looks the way it looks. Even at early elementary level, do not shy away from race talks. And if you can’t move, involve your white children in diverse activities other ways. A dance class, a new library in a different part of town, a house of worship with diverse leadership. Maybe we cannot quickly break down the centuries old walls erected in this nation, but we can all take baby steps within our own families.