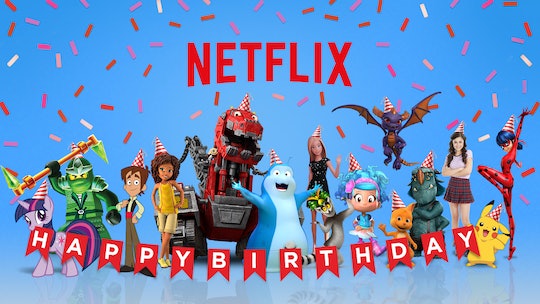 Are you tired of trying to figure out what to do for your kid's birthday party? Tired of scrolling through Pinterest for clever, creative party ideas, all the while knowing someone else in your kid's peer group is definitely doing the same thing? And what's more, they'll probably beat you to the punch with their 1920s flapper-themed birthday party complete with a Great Gatsby-esque swimming pool? Well, worry no more; Netflix has you covered. As of Sept. 14, you can now celebrate your kid's birthday with Netflix and give yourself a giant pat on the back for a job well done.

According to a Netflix press release, the streaming giant is offering 15 two-minute Birthdays-on-demand featurettes with your kid's favorite characters singing them Happy Birthday.

Just imagine, you could basically invent a new theme for kids' birthdays. It's a little thing we adults like to call "Netflix and chill," but kid edition, obviously. Just choose your kid's favorite program from the list, put out some snacks, and enjoy the effortless beauty of a Netflix-themed birthday party. Choose from any of the following characters and have them wish your kid a Happy Birthday:

Let the chips (and candy and popcorn) fall where they may.

The reality is, an overwhelming majority of parents feel incredible pressure to create the "perfect" birthday for their kids. According to statistics shared by Netflix, 71 percent of parents find party planning for their kids overwhelming, while 62 percent felt they wished they could opt out of the party planning madness. Social media pressure didn't help matters much either; a full 49 percent of parents found party-planning daunting because of the competition among parents in the Instagram/Pinterest-perfect era.

David Beckham throwing daughter Harper a sixth birthday party at Buckingham Palace comes to mind. How can anyone compete with that other than the actual royal kids?

Every parent should be able to make their own choices about birthday parties, of course. If David Beckham wants to throw his daughter a smashing birthday party at the palace, he should. And if this were the general rule of thumb — if some parents simply chose to throw extravagant birthday parties while others went for something simpler and no one got shamed either way — that would be great, and kids would likely be just as happy. But that doesn't seem to be the way things go down. Mom-shaming is probably the worst trend since forever, and it doesn't seem to be going away. Birthday parties are in no way safe from the scourge that is mom-shaming. Not to mention, when moms shame each other or judge a mom for throwing a less-than-extravagant birthday party, that behavior is picked up by their children, who could then bully that child who didn't get an actual pony for their birthday.

So perhaps it's time to climb off that particular merry-go-round and give yourself (and your kid) a break.

Invite a few kids over... not the whole neighborhood, this is a rookie mistake (trust me, this girl here is no rookie). Just a few friends. Order some pizza or whatever you want to eat. Queue up the Birthday On-Demand from Netflix. Eat cake.

And rest assured... your kid will be happy. Because you'll be relaxed, and it's sort of amazing how much that can affect the mood of the room. If you're stressed out and worried about impressing whoever you might feel you need to impress, it can feel almost like a physical presence in the room. Let it go. Have a little fun. Relax. Your kid will thank you, I promise.