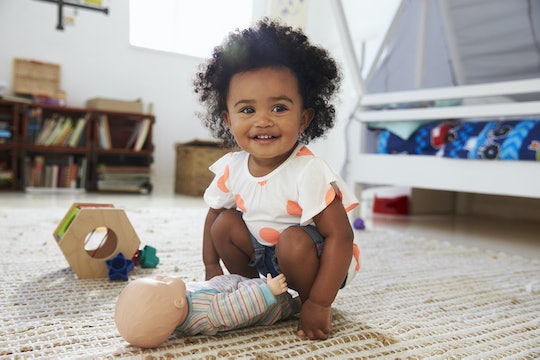 Your Kids' Taste In Toys Might Be Influenced By You, Study Finds, So Choose Wisely

It can be tough to tell how far-reaching your parental reach is with your kids sometimes. I know that I've often lamented the limited effect I believe I've had on my kids only to find out after the fact that they were watching everything I did. Or all of the bad things, at any rate, but I'm sure a few of my better moments made the cut in there somewhere as well. Because kids are watching us more closely than we realize sometimes, it seems. In fact, a new study found that you can influence your kids' taste in toys, and sometimes that influence is on a pretty subconscious level.

A new study published in the journal Sex Roles, as reported by PopSugar, looked at the way parents can influence the toys their children choose to play with at a young age. The study was lead by Rebecca Woods, a researcher at North Dakota State University, to find out whether or not parents might encourage their children to play with toys traditionally identified with their particular gender. You know the old trope: girls play with dolls, boys play with trucks, that sort of thing.

According to the study, Woods and her team of researchers looked at 51 babies and 60 toddlers — between the ages of 5 and 12 ½ months old — with their parents during playtime. And the results are actually a little shocking.

Researchers initially paid close attention to toy preferences in 5-month-old babies, watching to see if their parents' particular choices made any difference to the toys they wanted to play with at the time. Perhaps unsurprisingly, it didn't. Baby girls didn't automatically choose a doll and baby boys didn't head straight for a little truck. At that age, the babies just wanted to play with whatever.

By the time the babies were retested at 12 months, however, a small shift had begun. While Woods noted to PsyPost that the girls still didn't exhibit a particular preference, more of the little boys were picking trucks as toys. As she explained to PsyPost:

This is the "nature or nurture" debate as it relates to sex differences. The crux of the nature/nurture debate is, "How much of behavior can be altered and how much is just the way it is…it can’t be changed without somehow changing our physical makeup?" Can we decrease behaviors that put us at a disadvantage and increase behaviors that are good for us?

Why the change in behavior with boys specifically? Are parents still subconsciously (or consciously) steering their sons away from dolls and other nurturing types of toys? It seems that long-term influence does change the way a child will play with their toys, but short-term intervention might not make much of a difference.

Woods and her team asked parents to sit at the table and encourage their child to play with one toy while ignoring another, according to the study. In these cases, the children didn't appear to be affected. But they were affected by toys that were similar to ones they already had at home, as the research noted. In other words: Toys that parents were buying for them.

And parents were apparently buying their sons nearly twice as many trucks as any other toy, according to PopSugar. "The toys that they played with in the home (i.e., the toys that they had been exposed to for some time) predicted their preferences," Woods told PsyPost. "Since parents choose the toys in the home, parents may be able to influence infants’ toy preferences over time through simple exposure to toys."

Of course, this study is quite small and has a few limitations. Most notably it relies on accurate reporting from parents to tell researchers which toys their children are most likely to play with at home.

There have been other studies to support this research in the past. In January, for instance, the journal Infant and Child Development shared research by John A. Barry of University College London’s Institute for Women’s Health and found that children frequently played with toys traditionally assigned to their gender, according to the Daily Wire. While the study found that outside influence played a factor in their choices, researchers also noted that there appeared to be an innate bias as well.

Unfortunately, though, a 2014 study found that choosing toys for your children based on traditional gender roles could affect their career choices down the road, according to the BBC, by not offering them a clearer picture of their potential options.

But with this recent study, it also makes a lot of sense that parents would be able to influence their kids toy choices. I mean, we're the ones picking them out before they get a chance to do it themselves, after all. So perhaps it's time for parents to pay close attention to old gender stereotypes from a young age. And not pass them on to their children.