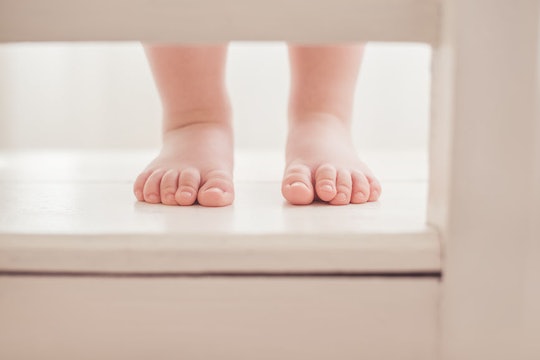 Here's When You Should Be Concerned About Your Toddler's Cold Feet

In my house, socks tend to disappear at an alarming rate. I have no idea if the dryer eats them, or if they just get up and walk away. Either way, there tends to be a lot of barefoot time for my family when we're indoors. That might explain why my kids' cute tiny toes can get a bit chilly at times, but I still manage to get a touch of paranoia about it every now and then. If you've ever wondered (as I have), what it means if your toddler's feet are cold, especially when you don't expect them to be, you'll be happy to hear that unless there are a bunch of other symptoms, it's likely not a big deal.

Because my son has some medical issues, my mind tends to jump to the worst case scenario when any little thing seems out of the ordinary. I've found myself googling "cold baby feet" and wondering if perhaps he's having a blood circulation problem, or some other more sinister issue I've never even heard of. But as with most things in life, the simplest explanation is often the right one. I spoke with Dr. Molly Broder of the Children’s Hospital at Montefiore, who says there's one main question you need to ask yourself when your kiddo's feet are cold. "Is this the only thing happening? Are their feet a little bit cold but they're otherwise totally fine?" Without any other symptoms, their feet are probably just, well... cold. A warm pair of socks with some cozy slippers might do the trick, as could adjusting the thermostat in your home to bring up their core body temperature according to the Cleveland Clinic.

If your child's cold feet are due to being outside in low temperatures or playing in snow, however, Broder says you'll want to keep an eye out for signs of frostbite. The skin on their feet and toes could appear abnormally red or white, and they might hurt in addition to feeling cold. "You want to warm up slowly, but definitely take the kid in to be examined to make sure the blood flow is coming back OK."

Though frigid temperatures might be the most likely cause of cold feet, they could also be linked to some serious medical issues. "When kids are sick and your body's not doing well, then your body prioritizes sending blood to all the important places, all of the internal organs — your lungs, your brain — and your body's not going to send as much blood to your fingers and toes," explains Broder. But at that stage, cold feet would be just one of many worrisome signs you'd be seeing, and you'd likely have little doubt that something was up. If cold feet are accompanied by a fever, throwing up, pain in the limbs, or paleness, all these things symptoms could add up to meningitis or septicemia according to the Meningitis Research Foundation. Broder has seen cases of meningitis so serious that children have needed fingers or toes amputated due to lack of blood flow.

Heart problems can also cause circulation and blood flow issues that show up as cold feet. One such condition is myocarditis, according to Better Health. As with meningitis and septicemia, you'd most likely see a number of other symptoms that would let you know you're dealing with something serious. Those can include fever, swelling, chest pain, and skin that starts to look blue or grey. Keep in mind that even if your child's heart looked fine during your pre-natal check ups or even at birth, problems can still present themselves later. "Either it was very small and no one picked it up, or it's the result of some sort of infection," Broder says.

Overall, cold feet often need nothing more than some warm layers to cover them up. But if they're just one of many symptoms that's got you worried about your little love, Broder says you should trust your gut. "Parents know their kids, so if you think that something is not right, then call your doctor or take them to be seen." It's always better to be safe than sorry.