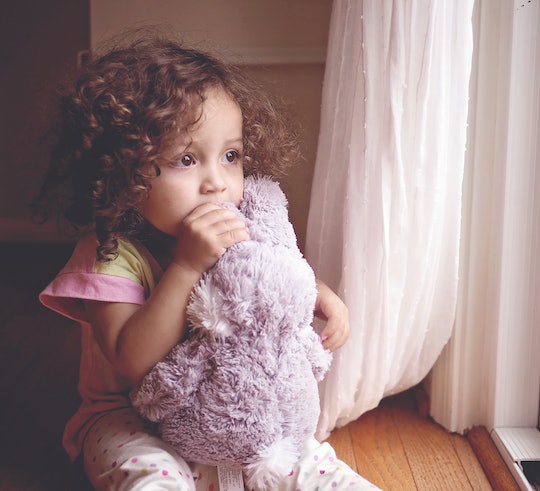 Don't Panic: There Are Actually Some Huge Benefits To Your Toddler's Lovey Attachment

Neither of my own kids ever had a lovey that they were super attached to, but my cousin Jack is another story. Jack is the son of my only uncle and is 17 years younger than I am, so he's more like a nephew to me. I watched Jack drag two loveys that he called "Bunny" and "Puppy" around everywhere for several years as a toddler. The connection he had to Bunny and Puppy was real, but what do loveys say about your toddler's attachment?

During one sleepover at my parents' house, Jack forgot his loveys and my aunt and uncle had to rush home and get them before he would go to sleep. He certainly used his loveys like a security blanket and felt safer with them around, sleeping with them until about age 6.

Dr. Michael Mintz, clinical psychologist at Children's National Health System, tells Romper that it is normal for kids to develop attachment to loveys after the first six months of life, although some children may not become as attached until later into toddlerhood, if at all. He also explains that loveys are referred to in psychological practice as transitional objects, noting that they "are reflective of both a shift and how the baby perceives and relates to the world."

"From a sensory perspective, transitional objects are a sign that the child no longer needs to be soothed by sucking (i.e. nursing, taking a bottle or pacifier), but can instead rely on more mature sensory input to soothe themselves (i.e. touching a soft blanket or stuffed animal)," Dr. Mintz says. "But a transitional object is more than just sensory support — it provides emotional support as well, and the ability for a baby to feel emotionally supported by an object reflects an important underlying developmental stage. The baby is essentially projecting the love and security that they feel in respect to their caregiver onto the object."

Loveys don't just have to be a stuffed animal or blanket. According to a report by Baby Center, parents say their kids create attachments to all sorts of inanimate objects including a hairbrush, one mom's nightgown, and even a combination lock.

While one 2014 study published in Frontiers In Psychology did find that kids who are in day care full time are more likely to develop attachments to inanimate objects, it seems that this information should be taken with a grain of salt. For example, my cousin Jack never set foot inside of a day care in his entire life, but was supremely attached to his loveys. "In essence, the object can serve as a place holder for the caregiver, allowing the baby to feel loved and supported by the caregiver even if the caregiver is not present," Dr. Mintz says. So, just because your child is in day care does not mean they will become attached to a lovey, and if your child is not in day care, they may still become attached to a lovey. The attachment has to do with how their lovey reminds them of your love.

In places such as a day care or being cared for by a babysitter, some children benefit from having their familiar lovey with them. "In toddlerhood, a transitional object can help a toddler tolerate unfamiliar or new people or new situations without relying on as much physical support (such as being held, carried, or hugged) as infants often need. Most importantly, a transitional object reflects a step in the direction of more emotional independence; although the child does not feel alone (because they have the transitional object), they are ultimately the one doing the work of settling, soothing, calming down, etc.," Dr. Mintz says.

"From a practical perspective, when a baby or child is attached to a transitional object, it provides a caregiver with some freedom and flexibility, as the caregiver can give the object to the baby or child when they are upset or struggling to fall asleep. More importantly, though, a strong connection to a transitional object is the first of many steps of a child learning to soothe themselves," Dr. Mintz tells Romper. As a parent of a son who still at 5 years old struggles to fall asleep on his own, it sounds like some kids and parents alike could really benefit from developing an attachment to a lovey for self-soothing purposes.

Dr. Mintz explains that by the time a child reaches preschool age, loveys should more or less be only used at bedtime and no longer needed to help soothe a child in unfamiliar situations. "A transitional object could become problematic if the child is incapable of tolerating separation from the object. For example, if the child cannot tolerate being separated from the object during preschool, it could cause a problem. By preschool age, although many children continue to rely on transitional objects to settle for sleep, most children are able to transition to more mature representations of their caregivers’ love —namely, an internal, mental representation," he says. "They can understand that, even though they are at school, their parents still love them, and their parents will be there to pick them up at the end of the day. After taking this developmental step, many children no longer rely on their transitional objects to help them maintain that feeling of parental support and love."

More Like This
Tips to Beat Jet Lag, For You & Your Kids
Viral Hives In Children: What Doctors Want You To Know
A Parent’s Guide To Stomach Pain In Kids
What To Do If Your Baby Sounds Congested
What Parents Are Talking About — Delivered Straight To Your Inbox