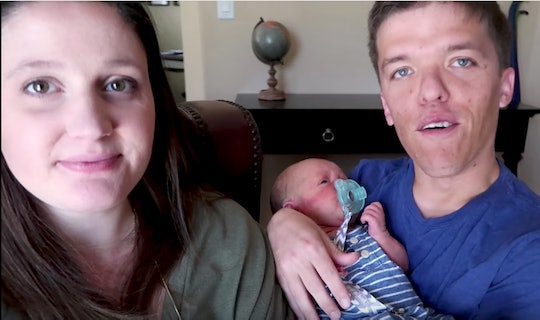 Little People, Big World star Zach Roloff knows a thing or two about being around children, as he himself is a brother to two younger siblings. But once you become a parent to your own child, things can be a bit trickier. After welcoming their first son just a few weeks ago, Zach and his wife Tori are experiencing parenthood for the first time, firsthand. And luckily for the new parents, things are going pretty smoothly. In fact, they revealed that Zach Roloff is already a diaper changing pro, which means parenthood can only get easier — Right? Maybe?

All jokes aside, in a new video blog shared TLC's YouTube channel, Zach and Tori revealed some new information about how they're tackling parenthood. It seems like, in the past month since son Jackson Kyle Roloff was born on May 12, things have only been positive for the new family of three, which is promising, at least. In their first on camera appearance with Jackson, the Roloff family was happy (albeit a bit exhausted, to be sure), sharing updates about baby Jackson and life as new parents. "He's been pretty easy, minus when he's hungry," Tori said.

For his part, Zach has been and continues to be confident in his abilities as a parent — and wife Tori agrees. "Feeding has been alright, changing the diapers, I knew I was going to be a professional," Zach joked.

It seems like the parenting thing has been smooth sailing for Zach and Tori, who just announced that Jackson was born with achondroplasia, or a form of dwarfism, like Zach. Achondroplasia, according to March of Dimes, affects a baby's bone growth and is caused by a genetic mutation. It's a relatively rare genetic disorder, occurring in one in every 15,000 to one in every 40,000 live births.

In the video, the couple addressed Jackson's dwarfism, with Zach offering some heartfelt words that prove they'll both be amazing and supportive parents for the rest of the Jackson's life:

We just want to give him a happy and healthy life and hopefully he can experience as much of the world as Tori and me have been able to and hopefully much more. So that's our goal for him. You know, he might have to take two steps for everyone else's one step, but hopefully we will be able to raise him in a way where that won't stop him.

While it might seem like the Roloffs have a lot to take on as new parents, this video update shows that they pretty much have things under control, which is excellent news for everyone.