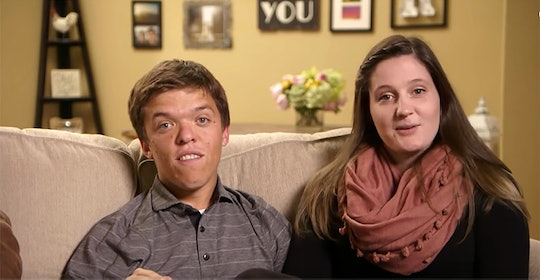 Little People, Big World star Zach Roloff loves to take trips with his wife, Tori Roloff, and their 1-year-old son, Jackson. Most recently, the trio took off for Mackinac Island, an area located between Michigan’s Upper and Lower peninsulas. And on Sunday, Zach Roloff shared a new photo of his son sitting along the edge of a body of water. The problem? Some people think the snap shows Jackson in a potentially dangerous situation, as he appears unaccompanied at the time. Although it's *highly* unlikely Tori and Zach would ever put Jackson in harm's way, it's understandable why some fans are upset given the concerning statistics regarding child drownings.

It's extremely common for parents to take their children to see places they frequented as a kid, and Zach is no exception to this sweet phenomenon. Apparently, Mackinac is a very special spot to Zach and the entire Roloff family, especially since Amy Roloff's parents own a cabin in the area. Adding feul to this sentiment is Tori's message about taking Jackson to explore Mackinac for the first time.

"Exploring Mackinac city today! Zach has talked about this place since the first day I met him," Tori penned on Saturday, according to Instagram. "So thankful to finally get to see it and show our baby j! Plus this colonial soldier was a plus! #thisismackinac."

Aww. It's clear the area holds a special place in Zach's heart.

Just one day after Tori shared her sweet post, Zach took to Instagram to share a shot of Jackson sitting on a rocky beach solo. Although it's assumed Tori and Zach were both present at the time, the post only features Jackson.

Shortly after the snap was shared, a few fans took to the post's comments section to question why Jackson was posed alone in front of a vast body of water.

"Kind of too close to the water for that baby by himself," one person commented, according to Instagram.

"All by his lonesome," someone else added.

"Oh wow!!! Scary a lil," a commenter penned. "But I know you are watching very closely keeping Jackson safe from Big fishies!!"

The concern from fans — although a bit misguided — is fairly reasonable when you consider drowning is the leading cause of death for children under the age of four, according to the Daily Mail. Although it's highly unlikely Jackson was at risk when the photo was taken, the timing of the post isn't ideal. On July 30, for instance, former Olympic skier Bode Miller opened up about the recent drowning death of his 19-month-old daughter, Emeline. During the interview with TODAY, Miller and his wife, Morgan Beck Miller, repeatedly warned fellow parents about drowning death statistics and informed viewers about the different ways to keep children safe.

“ ... Always be aware of water and place as many barriers between your child and those bodies of water as possible (locks, door alarms, pool fences). None of us are immune to this devastating life changing statistic," Morgan elaborated in an Instagram post just four days after the interview aired. "#drowningprevention #helpspreadawareness #knowledgeispower #stopdrowningnow.”

Of course, it's fair to assume Tori and Zach didn't think about the repercussions of the photo when they shared it. Many parents pose their kids in front of oceans or lakes all of the time, and there's no denying the aforementioned photo of Jackson is beautiful. Not to mention, the potential risk to Jackson was minimal considering his parents were steps away.

"Oh come on!! I'm sure they woke up and thought 'Oh, let's just go set Jackson up by the water, sit back and see what happens today,'" one person commented about Jackson's safety. "He is fine!! They could be on him before he turns a knee to the ground."

Going forward, it might be ideal if Zach and Tori include disclaimers in their photo captions to avoid controversy. Zach and Tori are clearly awesome parents, and I'm sure they wouldn't want to send the wrong message about an important issue like water safety.