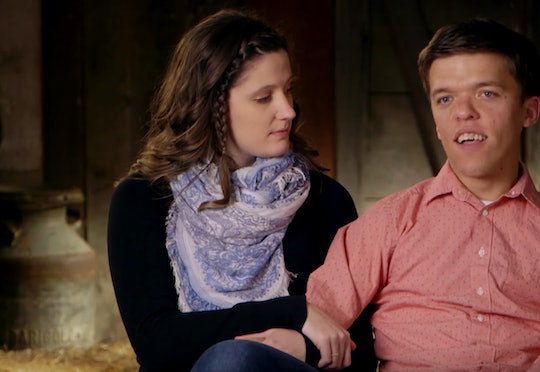 It's easy to see why fans can't get enough of the Roloff family. For years, fans have been following along with the members of the Roloff family on their TLC reality show, Little People, Big World, and have watched their lives change on camera right in front of their eyes. Last year Zach Roloff and his wife, Tori Roloff's lives were changed in a major way when they welcomed their son, Jackson, into the world. And on Saturday, Zach and Tori Roloff celebrated Jackson's first birthday with the sweetest message for their son.

It's hard to believe that just one year ago, Tori gave birth to Jackson, according to TLC. At the time, the couple (understandably) could not have been more happy to welcome their baby boy into their family. And his arrival could not have been any more fitting, especially since, according to TLC, Jackson was born on Mother's Day weekend last year. "Jackson has already mastered holding daddy's fingers and snuggling with mom!," Zach told TLC at the time. "He is adorable and Tori and I are loving being parents."

In the many months since then, it has been clear through their Instagram posts and on Little People, Big World that their love for their son has only grown — and you can see why in Tori's Instagram post to Jackson on his birthday on Saturday. In the post, Tori detailed how much joy their son has given them. "This year has brought nothing but joy to our family and it's all because of this guy right here, Tori wrote.

Watching babies grow is so bittersweet. Although Jackson is growing up into his own person and celebrating milestones, as Tori wrote, this was the last time she would be able to set him down on this blanket to take his monthly check in photo. But, as Tori wrote in the photo's caption, it's "the first of many things I'll have to let go of."

In spite of wanting to hold on to his baby days forever, Tori is more than happy to watch her son become the person he is. "My baby somehow has turned into a little boy before our eyes and I have loved watching him grow," Tori wrote in the Instagram post. "This year has gone by way too fast. You bring me such happiness and you have spoiled me as your mom."

Anyone who has followed along with Zach and Tori's little family knows that they've had quite the journey to get where they are today. When Tori was 34 weeks pregnant, according to In Touch Weekly, her and Zach found out that Jackson would be born with achondroplasia, or the same kind of dwarfism that Zach has. Although Tori expressed her fears for their son during an episode of Little People, Big World, according to In Touch Weekly, Zach and Tori's honesty about their son and his condition is super refreshing, especially since it can help so many other moms going through the same thing.

After Jackson's birth, Zach and Tori told People that they knew their lives would be changing forever. "We knew we were leaving our previous life behind but we were okay with that," Zach said. "I want people to know that he's just like his dad: being a dwarf is part of the whole package of who he is." You can tell from Zach and Tori's Instagram posts about their son that he is more than his condition.

In every single post, Jackson looks like the happiest and sweetest baby, and for fans, being able to watch Zach and Tori go on this journey on Little People, Big World, is all the more special. If fans have enjoying watching Zach and Tori raise Jackson during his first year of life, there are no doubts that his next year will be even sweeter.

One year down, but many more to go (and to follow along with).