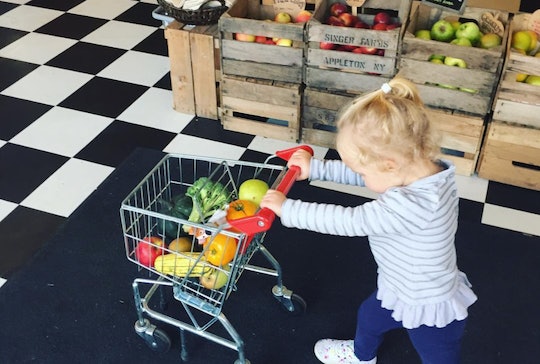 These Parents Live Almost Completely Garbage-Free, & It's Not As Hard As You'd Think

To make her alternative to disposable wipes, JoAnn Reynolds, 41, cuts up old shirts, places them in a big mason jar, and fills it with Dr. Bronner's Castile soap and water. Reynolds is a mother of four children, ages 10 through 24, and says she is a fan of homemade hygiene solutions because there are "zero toxins." Plus, she says, storing her cleaning products in mason jars "saves from all the plastic packaging and chemicals." Reynolds is just one of many parents who ascribe to a zero-waste philosophy, making their own diaper paste, storing their breastmilk in mason jars instead of plastic bags, and even sharing breastmilk to keep from using formula.

These parents are highly resourceful and aren't afraid to ask whether there might be a better way to do things. "We made [my 5-month-old niece] some homemade diaper rash cream and baby powder," Reynolds tells Romper. "Pinterest is great for recipes." Her radical self-sufficiency is in part environmentally motivated, and in part simply economic. Along with other zero-waste parents, she chronicles her journey on Instagram as "Zero Waste Mama"; a gallery of followers are attracted to still lives of mason jars and homey shots of toddlers drinking from aluminum cups.

Raising a baby can cost a lot of money. According to the U.S. Department of Agriculture, a middle-income family who had a baby in 2013 is projected to spend $245,340 on the first 18 years of the child's life. Parenthood is generally associated with consuming more. But the zero-waste parents Romper spoke to said that their philosophy is better for the planet, and therefore their child. Those who live zero-waste lifestyles aim to send as little as possible to landfill, and often to avoid single-use plastic. Almost everything they buy or use is easily recyclable, compostable, or, even better, reusable.

"Don't buy everything people say you need before your baby arrives," Megean Weldon, 31, who has a 1-year-old son, tells Romper in an email. "Most 'baby items' are not necessary and just add to the baby clutter and equal more resources being used to create those unnecessary things. Buying secondhand was probably the best choice I made as a new parent."

Weldon, who is an IT Manager and blogger known as the Zero Waste Nerd, adds that buying secondhand makes sense for children who quickly outgrow their clothes. "Secondhand items saved me hundreds and took new products out of the waste cycle," she explains.

I know the thought of other people's kids' puke on a stroller doesn't sound appealing, but almost everything can be taken apart and thoroughly washed.

Rookie parents often find themselves inundated with advice around all the gear they will need to parent. Opting out of the consumption cycle removes some of that stress, according to some zero-waste parents.

"One of the biggest things I wish I could tell expecting parents is that you really only need a fraction of the gear you're told you have to get and that almost everything can be found secondhand in excellent condition," Liv Stevenson, aka "Liv Wastefree" on Instagram, 34, tells Romper by email. "I vividly remember adding things to my baby registry that I was skeptical I'd need, but that others seemed to think were 'must haves.'"

Stevenson, who is an architect and mother of an almost 4-year-old son, is a big proponent of buying second-hand, which shouldn't be a revolutionary idea, but somehow is. "I know the thought of other people's kids' puke on a stroller doesn't sound appealing," she says, "but almost everything can be taken apart and thoroughly washed/disinfected, and you'll find some really nice stuff at a fraction of the cost."

Another way to reduce waste and save a ton of money in the process is by making your own baby food. Erica Wells, a registered dietitian and the blogger behind A Waste Not Kind of Life, found making baby food for her 2-year-old daughter to be super easy. "One of the easiest swaps any parent can make to save waste and money is making your own baby food and yogurt/smoothie snacks for on the go instead of buying the ones in single serving containers," she tells Romper in an email. "All it takes is a blender!"

Like Wells, Weldon made her own baby food, despite having a super busy schedule. If you're interested in doing the same but don't know if you can find the time, she has some advice for you. "I made all of my son's food as a baby because it was so easy and very inexpensive. I did not have time to make his meals every day so I'd prepare large batches at once and then freeze in little jars," Weldon explains. "All I'd have to do when it was meal time was thaw them out. I'd take everything from steamed veggies to leftovers from our nightly meal and blend it in our food processor." For Weldon, the task of making her sons meals was enjoyable in itself.

So far, so easy, right? Many parents are open to the idea of buying second-hand and avoiding needless purchases, but are given pause by the idea of cloth diapering or reusing hygiene supplies.

According to New Kids Center, most babies use 8 to 12 diapers a day. That adds up to 2,920 to 4,380 diapers in the first year of their life. If each disposable diaper costs about 20 cents (which Investopedia says is the average price), that's between $584 and $876 spent on diapers in the first year of your child's life alone. So, if you can get past the idea of it, one way to save money on diapers is to opt for reusable cloth diapers, instead of disposable ones that will take hundreds years to decompose in a landfill.

It's understandable to be nervous about getting started with reusable diapers — it's important to remember that they are understandably not an option for everyone — but these moms promise that operating a cloth diaper isn't really any worse than squeegeeing poop off a writhing bum with disposable wipes.

Wells says she spent the first few months of motherhood using disposables. "I did change over to cloth diapers back in May after being reluctant for months. I was always weirded out when it came to bodily fluids but I decided that if I was going to do this thing, I was going to do it right and I felt so guilty about the amount of diapers I was throwing away," she says. "It actually turned out to not be as bad as I thought it would be!"

Meredith Bay-Tyack, 32, a blogger, tagline "modern mama with zero waste," was worried along with her husband that using cloth diapers would be a challenge, but they went for it anyway from day one. "We thought it might be tough but would be worth the money savings," she says, but they "were surprised (and still are) at how easy cloth diapers and wipes are to manage once you get a good wash routine down. We even travel with our cloth diapers!" She recommends trying different brands if you don't immediately fall in love with the practice.

Stevenson also didn't find cloth diapering to be gross. "There was the occasional blowout, but that seems to happen with disposables as well," she says, explaining that the only issue was that cloth diapers weren't absorbent enough once her child got bigger. At that point, they switched to disposables at night.

My kids really enjoy it and find joy in making their own granola bars.

Once their children are older, these parents involve their children in their zero-waste lifestyle. "Our younger girls packs their own lunches for school. All in reusable containers," says Reynolds. "They always grab a reusable cup filled with water when leaving the house. My kids really enjoy it and find joy in making their own granola bars."

In infancy, Weldon supplemented her own breastfeeding with a friend's breastmilk instead of formula, but is adamant that parents should not let zero-waste philosophy impact their feeding decisions. "There were times I failed to produce enough and thankfully I had a very close friend who happened to be an over producer," she says. "Regardless, whether it’s breast milk or formula, a fed baby is a happy baby."

Bay-Tyack agrees, explaining, "Zero waste didn’t play into my decision on how to feed my baby at all. Just like anything necessary for health or a medical situation, I don’t think moms (or anyone) should worry about the garbage aspect." That mentality extends to the packaging of formula, she says. "The most important thing is taking care of yourself and your baby."

Both Bay-Tyack and Weldon add that they freeze their breast milk in quarter-pint mason jars, which are reusable, instead of disposable storage bags.

As to how she got their start in zero-waste, Bay-Tyack says that she needed to set firm goals. "I'm not ashamed to admit that the hardest thing for me to do to dramatically reduce my household garbage was simply starting," she explains. "I decided to challenge myself to a zero waste year because it helped me stay accountable." Two years later, she has kept up the lifestyle full time.

"I think the biggest takeaway I can provide is to be open to the possibilities. Don't immediately push off an idea just because it sounds complicated, weird or gross," says Wells. "It's all about mindset and if your mindset it flexible to change and trying something new, then it's more of an adventure than a challenge! You've got this."

Going zero-waste is not an option for everyone, but if you're interested, simply taking the first step is a huge accomplishment. "Start where you can and from there it grows," recommends Reynolds.

"I believe that anyone can dramatically cut down their trash production. What was true for me may not be true for you, though," Bay-Tyack adds. "Look through your trash bin. Gross, maybe, but necessary to see what you're actually throwing out. For us it was a lot of food packaging and paper products, so that's where we started our waste reduction efforts. For someone else it might be different. You won't know until you look!"

It's crucial to remember that every parent is doing the best they can, and that it's impossible to control what others do. "I can't always control what my son brings home from daycare or how many gifts our family buys him," says Weldon.

Adds Stevenson, "Life happens, and you can only do the best you can."

More Like This
These Stepmother's Day Instagram Captions Are Straight From The Heart
Stepmom Quotes & Sayings For Every Occasion
My Nanny Showed Me How To Be A Mother
Infertility As A Stepmom Means Double The Alienation, But So Much Love