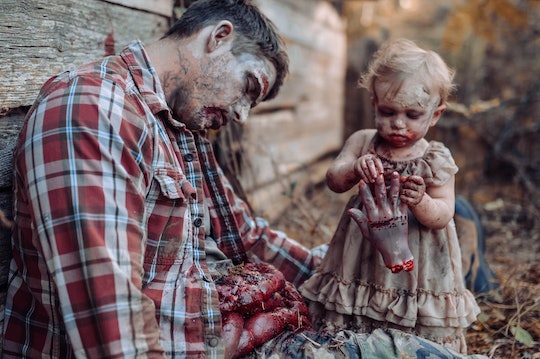 Dad's Zombie Photoshoot With His Toddler Daughter Is Scary Brilliant

For plenty of parents, a typical father-daughter photoshoot might consist of the little girl wearing a princess dress while sitting at a tiny table with her daddy and sipping tea. It's endearing, and it's adorable, yes. But it's also been done roughly a million times before. So if you're on the prowl for a different take on family photography, then I've got the perfect inspiration. Bonus: It's perfect for Halloween. That's because this dad's zombie baby photoshoot is peak father-daughter boding.

Tiffany Renfroe — a mom of three who is a labor and delivery nurse and has her own photography business (whew!) — has gone viral for a series of photos she shot of her husband, Daniel, and their youngest daughter, Oakley. And it isn't difficult to see why. In the photos, the zombified toddler can be seen "bonding" with her daddy by feasting on his intestines while he's slumped against a building. The little girl is also caught gnawing on his severed hand. You know, typical father-daughter stuff. It's delightfully disturbing in the best way.

Since Tiffany shared the photos on Oct. 23, the Facebook post has managed to attract over 70,000 likes and more than 136,000 shares. To be honest, after scrolling through the photos for the first time, I wasn't sure whether to laugh or to be horrified. But I guess that's the beauty of it all. Take a look for yourself!

So how did the idea for such a creepy photo session come about, you ask? The Taylor, Alabama, mom had recently enjoyed having a mommy-daughter photoshoot with 11-month-old Oakley, according to Click2Houston. Between Daniel's half-feigned jealously that he didn't get to have this type of bonding time with Oakley and his love for horror films — Michael Myers and The Walking Dead, in particular — a genius idea was born.

"I must have gotten tagged in the 'baby blood bath pic' like too many times to count. I wanted to do something, but wanted something original," Tiffany explained in a now-viral Facebook post of the zombie photoshoot. "Plus Daniel was a little salty (like margarita rim salty) that I got a mommy and me session while visiting family and friends in Oregon. Scroll through them all, Michael Myers might just rescue this sweet zombie baby."

For the record, Tiffany and Daniel's kiddos weren't scared at any point during the shoot, and all of the props were edible/made by Tiffany herself, the mom of three explained on Facebook. Oh, and no she most definitely did not put colored contacts in her baby's eyes.

However, it did take about two hours to get both Daniel and Oakley into their makeup — mostly because the curious little one wouldn't sit still. "I would do some of Daniel's, then smudge a little on her, do a little more of his and smudge again on hers. Brushes on him; brushes on her. She was even attempting to help with the makeup brushes! It was a game to her!" Tiffany told CafeMom.

Although the reactions to the spooky father-daughter photos have been mostly positive so far, there's always those select few who try to ruin the fun. "I am so humble for the reaction and support from the people who stand behind me, defending me as a person not even really knowing me," Tiffany told CafeMom.

I'm not one who is typically into horror movies, zombies, or that sort of thing. But I absolutely love this father-daughter photoshoot. Maybe it's because I've decided to get a little gory myself this October. After I bought a shark costume for my 9-month-old to wear for Halloween, I knew I had to take advantage of the fact that my breastfed she is a nipple-biter. So I spent 5 bucks on a long-sleeved, white T-shirt — and then proceeded to splatter the breast area with "blood." Is it disturbing? Yes. But is it an accurate representation of life with a biter? Also yes.

Kudos to this family and others who don't take themselves too seriously — and who find hauntingly creative ways to make memories with their children.