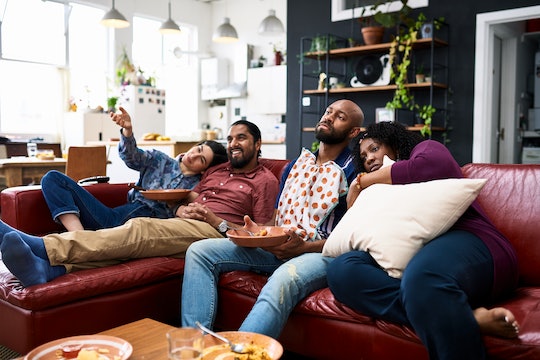 Eating Dinner With Your Family In Front Of The TV Is Good, Actually

Accepting that we’re better together this way has been a revelation. Mostly for me.

My local hardware store has a corner where the owner sells stuff from her own house that she doesn’t want anymore. It’s my favorite corner. Sometimes it’s her rolled-up used socks, sometimes it’s a ‘70s-era microwave — analog, of course. But it was the set of six TV trays on a little rolling cart that I bought from her for $5 that changed my life. They changed our lives, I guess. Or at least they let my kids and me off the hook from all of that performative dinner theater that, for years, we had been putting on for exactly no one.

Everyone says you’re supposed to eat at the dinner table. Everyone. Grandparents. Probably teachers. Your friends. Obviously celebrities. I’ve read a million interviews with celebrities trying to prove to everyone they’re involved parents and they all circle back to the same thing: “I always make sure to sit down to dinner at the table every night.” I used to get that pit in my stomach like, Bennifer are doing dinner with the six kids at the table so where did I go wrong? But now I think, Have at ‘er Bennifer. And we pull out our TV trays and decide what we’ll be watching with our dinner. And I’m not at all sorry.

We used to try eating at the table, the kids and I. One of us (named me) made a big deal out of it, in fact. I don’t know if I felt like I needed to prove myself because I was on my own as a parent or because I had four boys or because that’s parenthood in general, always trying to prove to someone that you’re doing a good job. Whatever the reason, I would get two boys to set the table and the other two boys to clear it, like a little assembly line. That part was fine, all the condiments on the table and our folded napkins and our big bowl of mashed potatoes cooling on a folded-up tea towel between us. It was the talking and the chewing and the eye contact that felt wrong.

“So, how was class today?” I would ask, as if for the pleasure of a studio audience that was hiding just beyond the family room. Cue shrugs all around, obviously, because this is the second worst question in the world right behind “What’s new?”

“What’s new?” I’d ask next. One of the boys would throw me a bone sometimes with an answer as vague as my question. It was certainly not the glittering type of dinner conversation I aspired to. And there was no laugh track.

We all have to be these other people all day at school and work and with friends and family. But here on these couches, with these TV trays, eating side by side? It is our best version of us.

When we ordered takeout, though, the rules did not apply. We would sit cross-legged around our big coffee table with Chinese food or pizza while we watched cable television. The Simpsons was always on somewhere, and every once in a while they would watch Gilmore Girls with me. But mostly we talked. Shared food. Passed the salt, the ketchup. Their faces got to be so unguarded, their talk loose and easy and funny. Oh my God, they are funny. I found out what was new. I found out about class today. I just didn’t even have to ask because they didn’t have to look at my tight face over the pot roast begging them to star in my show that no one was watching.

The TV trays were my first step in admitting that this was the way we wanted to eat. I invested five whole dollars in TV trays and we transitioned to most meals in front of the television together. Always together though, that was the trick. Sure, we still do Christmas and Thanksgiving and birthday dinners at the table just because those are days that feel like a big deal anyhow. We put on our good new clothes. We set the table with candles and flowers. We know how to play up the ceremony and change it up.

But accepting ourselves as people who want to eat in front of the television, who want to wear sweatpants and sit cross-legged on the couch and half-watch old episodes of The Office while we eat our portioned-out casseroles, has been a revelation. Mostly for me. I don’t feel like a bad mother. I feel like I get to be myself within being their mom and it’s better. We all like this version of us better just because it’s true: We are better this way. We ask each other the good questions and get the good answers. Not because we’re reading from a script but because we’re taking a break from playing at being a family. Like I imagine actors hanging out at the canteen just talking like regular people in between takes where they’re being other people.

I guess that’s it: We all have to be these other people all day at school and work and with friends and family. We have to keep refitting ourselves to what other people want us to be. But here on these couches, with these TV trays, eating side by side? It is our best version of us, and I’m not sorry about it. Not even a little.