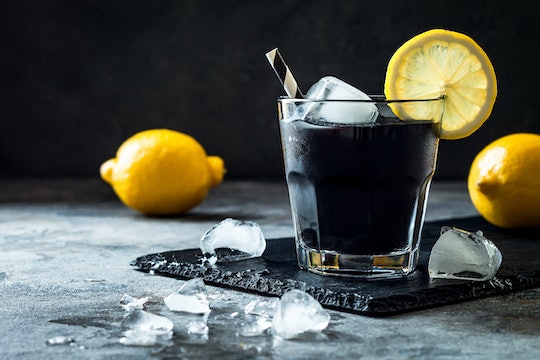 Experts Explain Whether Activated Charcoal Is Safe For Kids To Eat

What to know about the trendy ingredient.

For the past few years, the activated charcoal rage has stayed pretty strong. It's in everything from ice cream to pizza crust and pops up all the time in health and beauty products, such as toothpastes, face masks, and wellness-focused juices. People are popping charcoal left and right for the alleged benefits, but what about children? Is activated charcoal safe for kids?

Everywhere you turn, you're hearing about the magic of charcoal. People claim that it’s a detox and that it can cleanse your body, among other sales pitches. The truth is that it has been used for decades to treat poisonings and overdoses, but that doesn't automatically make it a cure-all ingredient for everyone. It's easy to get trapped in the thinking that because children have all the same parts adults have, that their bodies work to process substances in the same way as an adult body does. However, children really aren't tiny adults, and there are many instances wherein the pharmacodynamics — that is, the way the drug acts in the body — varies widely between the pediatric and adult populations.

According to a study published in The British Journal of Clinical Pharmacology, there are a few essential differences between a child's body and an adult's body, which make pharmaceutical use and dosing a particularly fraught and worrisome task. For one, the blood-brain barrier responds differently in children than it does in adults, and all drugs, including (and maybe especially) homeopathic remedies like the popular activated charcoal, need to be studied rigorously to note any possible detrimental side effects. Children also have an immature renal system and more water in their bodies than adults. Their kidneys simply need more water, so there is an increased risk of electrolyte imbalance and dehydration in children than adults.

Just because something is safe, if not beneficial, for adults, doesn’t make it the same for children. So, what about the ever so trendy activated charcoal?

Benefits and risks of activated charcoal

As Dr. Jessica Madden, M.D., FAAP, IBCLC, founder of Primrose Newborn Care, explains to Romper, the benefits of activated charcoal include detoxifying the body of toxins, drugs, and poisonous substances. “Activated charcoal can help to prevent some poisonings (i.e. acetaminophen/Tylenol) if given with an hour or so of an accidental overdose,” she says.

That being said, Madden also notes that “activated charcoal should never be a replacement for medical care.” In fact, when it comes to kids, the risks outweigh any potential benefits. “Activated charcoal can lead to electrolyte problems in children, which are possibly deadly,” Madden says. “Signs of an electrolyte imbalance include mental status changes, lethargy, heart rhythm problems, dizziness, seizures, and vomiting. It can also lead to abdominal pain and constipation. There are also reports of children accidentally inhaling activated charcoal, with resultant lung damage.”

Is activated charcoal safe for toddlers and kids?

Giving children activated charcoal is not recommended unless done by a medical professional. “Activated charcoal is safe for most toddlers and kids, but only if it is used with medical supervision (i.e. in an emergency room),” Madden says. “It should never be given to infants who are less than 12 months old.”

Romper also reached out to the American Academy of Pediatrics (AAP) to get their official stance on the safety and efficacy of the use of activated charcoal with children. It is brief and to the point. The AAP tells Romper, "Current research does not support the routine administration of activated charcoal in the home as efficacy and safety have not been demonstrated." In short: Don't give it to your kids.

This fad may have to pass over your household, but if your doctor prescribes it for your child for a therapeutic reason, that's an entirely different matter. When it comes to children, no dose of a drug is considered safe unless administered by a physician. That includes all those fun black foods popping up faster than you think them up.

More Like This
6 Mindfulness Activities For Kids
Everything Parents Need To Know About Monkeypox
Why Does My Baby Cough While Breastfeeding? Experts Explain
How To Build An After-School Routine That Works For Your Family

This article was originally published on July 1, 2017