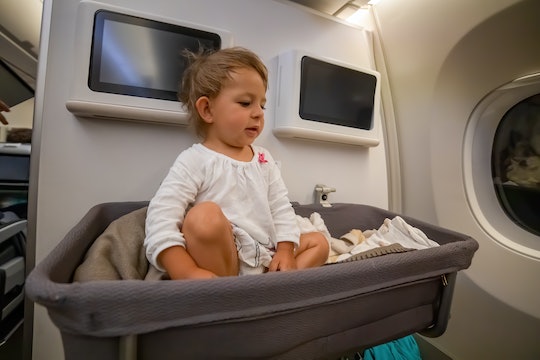 Air travel with an infant is an adventure in and of itself. But one thing that can make it easier is ensuring the comfort of your child while on board. Sitting on your lap for the entire flight might not be the answer. But whether or not you can fly with a baby bassinet really all comes down to your definition of a bassinet — and whether your definition is the same as airlines. Take note, in FAA terms, a bassinet is not the same as a car seat, and car seat, ultimately, is what airlines prefer.

On nearly every major airline Romper checked,* personal bassinets (that is, personal cradle devices without restraints) are not allowed. Instead, airlines allow FAA-approved Child Restraint Systems (CRS), a.k.a. car seats that can be strapped into a plane seat. These are free to check at the gate or ticketing. Bassinets, however, are not.

But, there is some good news for babies that would do better laying down in a roomie bassinet. There are airlines that provide bassinets you can reserve in advance.

Can I bring a bassinet on an airplane?

Sure. You can bring a bassinet on an airplane but you’ll have to treat it like any other piece of luggage, storing it in the carry-on compartment or under the seat. That’s because bassinets are loose, open devices, that can’t lock into the seat, and as such they do not qualify as a CRS device and therefore cannot be used in place of a car seat.

You also cannot check them for free. The complimentary deal nearly every airline extends to extends car seat and strollers (one per each individual child passenger) does not apply to bassinets.

The good news is, some airlines understand that babies are most comfortable laying down (and hopefully napping). That’s why airlines like American Airways and Hawaiian offer their own bassinets on certain aircrafts (often called carrycots or skycots on international airlines). These airline bassinets as sturdier than personal devices and often lock into the seats or, in some cases, the bulkhead of a plane.

In the case of American Airways, infants may use one of these proprietary bassinets provided the child is less than two years old and less than 20 pounds. These devices are only available on a first come, first serve basis at the gate and only on 777-200, 777-300 and 787 aircraft. In addition, they can only be used in Coach Class.

In Hawaiian there are similar restrictions. Hawaiian’s bassinets have to be reserved in advance and are only available if the accompanying adult must purchase a bassinet-compatible Extra Comfort seat in Row 14 (14 AB, CD or EG, HJ).

If you’re traveling abroad, the chance of securing a bassinet is higher. Airlines like British Airways and Lufthansa, for instance, also have bassinets available. Again, you’ll need to book in advance and review the individual airline’s requirements prior to reserving for the most up to date information.

What does an inflight bassinet cost?

Inflight bassinets are at no extra cost beyond the ticket itself. But, as previously mentioned, securing one might come at a higher price given the cost of the guardian seat. For example, in the case of Hawaiian, a passenger must buy an Extra Comfort row seat which is more than a regular coach ticket.

The other price to consider is the personal price of exhaustion should you only pack a bassinet and not a car seat. In this case, the airline will require you to either hold your child or pay for a seat for them to sit in if they’re old enough. This is because bassinets are not CRS devices and therefore cannot be used inflight.

Should your bassinet be too large to go in the overhead bin, you may be required to check it, which you will have to pay for.

While this all might sound inconvenient, remember that the FAA made these restrictions in order to keep babies as safe as possible. Putting your child in a CRS that says “This restraint is certified for use in motor vehicles and aircraft" not only will be granted the green light for take-off, it will ensure your child is safe and secure throughout the entire journey.

For more information on individual bassinet policy and availability, visit your airline’s website for in depth information on reservations and requirements.