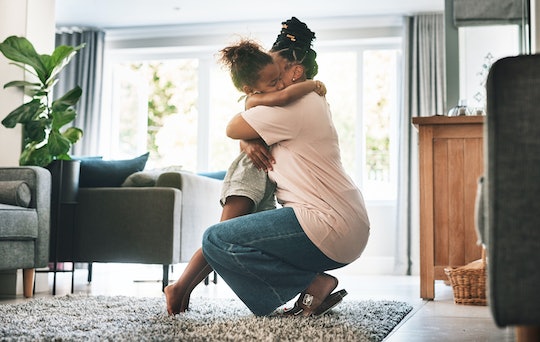 Apologize To Your Kids — They Are Desperate To Forgive You

I know I’ve given my boys so many reasons to forgive me, and they’ve done it every time, no matter what.

All your kids want is to forgive you. Here is how I know.

It was a day of small horrible things for me. A bad day at work, reeking of cooking oil after a restaurant shift left me with only $25 in tips. I was hoping for at least $50, I was hoping for $100. I was hoping to win the lottery with a lottery ticket I never bought but nope. It was a Tuesday same as all Tuesdays: long. A little disappointing. I picked the kids up from school, noticed one pair of sneakers were gasping their last breath before cracking open completely, a yawning mouth where a shoe should be.

We walked home together. The house smelled like cat pee or whatever that smell is boy cats do spray that gets into your baseboards and makes your eyes water. The dog peed on the kitchen floor, which felt like a small mercy since at least it wasn’t carpet.

It wasn’t the animal pee, or the thought of magicking some sort of dinner that four picky eaters would eat out of three sausages, frozen broccoli, a few pierogi, and some tomato sauce, that sent me over the edge. It wasn’t the hour-and-a-half of homework my second grader would have to do, which also meant I would have to do. It wasn’t the double shift I had waiting for me at the restaurant the next day.

It was that I stepped in the dog’s water bowl. That’s it.

And my oldest son, 9 years old, made the mistake of saying, “Why’d you do that? Now your sock is wet.”

I yelled at him. Yelled. I told him to go to his room if he was going to be rude, and when his face flushed (this is the part that clenches my stomach even now) and said, “What did I do?” I yelled some more. “You know what you did! Acting like I’m stupid. You know! Go to your room!”

He went. Climbing the stairs slowly, his back sort of graceful somehow. Like a martyred saint. His three little brothers were silent, nervous. Slinking to their own rooms, the two littlest holding hands. Supporting each other against my wrath.

My ears ringing, I was belligerent. Not my fault, not my fault.

Except of course it was.

I did not grow up in an era where people apologized to children. An apology was a sign of weakness, of letting your kid win, and in my era you did not let the kid win. Ever. You prevaricated. You blamed. You said nothing and brought home a new toy instead. Or a pizza.

So OK, there was this part of me that resisted. Wanted to just have a soak in the tub and move on and pretend. Buy a new toy. Or a pizza.

Except I remembered he flushed. His face, so embarrassed. Nine is that age when you are just finding your voice and to have a fledgling comment snatched out of the air and crushed by the person who loves you most. It’s not nothing.

Head down, feet dragging. The might of rightness on his side, his brothers waiting upstairs for the report. What a meanie, they’d say. She’s the worst. “I hate her apple muffins most!” (That would be from my second-oldest, the food critic).

“I’m sorry,” I said to the top of his head, meaning it with my everything. “You didn’t do anything. That sucked. I’m so sorry I yelled.”

I’ve given them so many reasons to forgive me, and they’ve done it every time. No matter what. No matter how wrong-footed I might be, if I apologize for real, I’m forgiven for good.

This is where everything changed, his shoulders unclenched under his little red hoodie. An exhale. “It’s OK. I know you had a bad day at work. I’m not mad.”

As easy as that. I saw it in his face, the clearing. One version of his night gone without a goodbye. There would be no hating me in his room. No wishing I would get hit by a car. No message scrawled across his Etch-a-Sketch reading “Kid for sale because his mom HATES him!” like he’d done before. Before I learned how to fix us.

All he wanted was to forgive me. He, and as I would later learn, his brothers, were hard-wired to forgive me, if only I said “I’m sorry” and meant it. I’ve given them so many reasons to forgive me, and they’ve done it every time. No matter what. No matter how wrong-footed I might be, if I apologize for real, I’m forgiven for good.

And this is the most beautiful thing in the world to me. How much our kids want to forgive us if we just apologize. I saw it that first time and now I see it all the time. Just the other day I saw a dad bending down to his crying son in line at the grocery store, whispering, “Sorry, buddy, I didn’t mean that,” over some argument I didn’t hear. Little mittened hands snaking up around his neck immediately. An absolution. Immediate. The air warm with their relief to be allowed to love each other.

I can be wrong and my kids will forgive me. This is all I need to know forever.