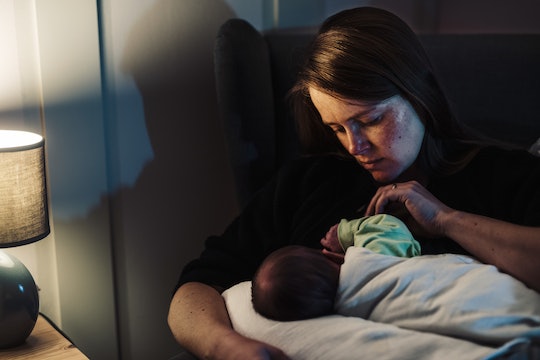 How To Keep Baby Feeling Safe & Cozy At Night

Because they’re definitely not afraid of the dark yet.

I was (and still am) what you'd call a nervous parent — especially when we brought our son home for the first time. I remember being so concerned about leaving him all alone in the bassinet in our bedroom while we stayed up and watched TV in the living room. What if he wakes up scared because he doesn't know where he is? What if something spooks him? What if newborns are scared of the dark? I was already a wreck in my best moments, and I wanted our son to feel safe and secure in his new home outside of the womb.

When Do Babies Become Afraid Of The Dark?

As far as when your child might actually be scared of the dark, Posner says it usually happens when the child is around 2 or 3 years old, because that’s when they really start imagining things. "Children become frightened by the dark around the age of 2 and this continues for several years,” pediatrician Dr. Robert Hamilton, M.D., adds. “The reason is because they begin to engage in more imaginative play. Scary images and events multiply the chance that they will feel fear and anxiety during this period. Some people never quite work through this and, even as adults, feel a sense of anxiety in darkness."

To ease these fears, a lot of parents choose this time to introduce a night light if they hadn’t already used one for their own needs — night feedings, middle-of-the-night diaper changes, etc. There are many schools of thought and arguments on parenting boards about whether or not this is a good idea, but McLaren believes a night light is a good idea. “If you start using a night light before your child becomes scared of the dark, that can potentially stop them from becoming scared of the dark in the future,” she says. “Night lights are a handy tool for going to visit your little one at night, too, as you do not have to turn on any brighter lights and you can keep everything low-key. If it’s also a very faint light, it will not disturb their sleep.”

However, McLaren does suggest that if you use a soft light in their sleep environment, it might be a habit that sticks with them even when they’re older. Which I think is totally fine, as a 35-year-old woman who prefers to sleep with the soft glow of a salt lamp at night.

But don’t feel like you have to put one in your child’s room. "Night lights are certainly not a requisite for parents to purchase. In the developed world, the amount of ambient light — from street lamps, car lights, and even the moon — often provide enough for children to see around their rooms — unless the windows are covered with heavy curtains,” Hamilton says. “But there is nothing wrong with having a night light from day one."

Posner says the potential effectiveness of using a night light depends on the child. “Some children will see more shadows from night lights and will get more scared. Others like the reassurance of a little light in their bedroom.”

How To Make Baby Feel Safe & Comforted At Bedtime

But to ease your own fears about a baby sleeping alone in the dark, Posner suggests following the American Academy of Pediatrics recommendations, which suggest babies sleep in their parents’ room — in their own cribs — until they are 1. “Once you move them, a monitor can help ease fears.”

McLaren also suggests that you ensure your child’s room is as welcoming, warm, and comforting as possible. “This can include introducing a night light into the room when your newborn is first home to help with night feeds, keeping the room a nice cosy temperature, and creating the same bedtime rituals every night.” Just be sure to follow safe sleep practices. McLaren also recommends a nice bedtime routine and items like a white noise machine or lullaby player so that they associate these items with sleeping and feeling safe.

“It’s important to remember that most children may experience some form of being scared of the dark, but it is perfectly normal and healthy to go through. Your job as a parent is to support them through this time, make them feel safe and loved, and encourage the behaviors that will send your little one back to sleep,” McLaren says.

Dr. Robert Hamilton, M.D., FAAP, pediatrician at Providence Saint John’s Health Center in Santa Monica, California, author of 7 Secrets of the Newborn, and host of the podcast The Hamilton Review: Where Kids and Culture Collide.