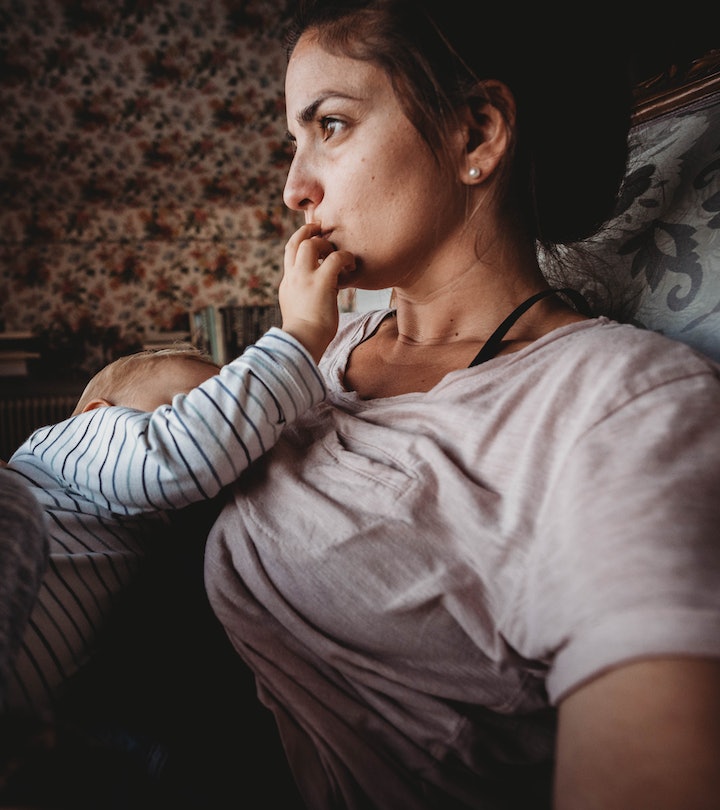 Here's How Long Most Babies Take To Breastfeed

This is what the experts have to say about the average length of a feed.

When I first started trying to breastfeed my son, I was so confused and overwhelmed, particularly about the fact that I had no idea how to know if he had enough milk, or how long it would take to breastfeed a baby. It’s not like a bottle where you know they’ve had a certain amount of ounces and you knew they were done when the bottle was empty. But how do you know when the milk comes from the boob? What is the average breastfeeding time? There are obviously line markers on your breast, and babies can’t talk and tell you they’re full or they need to be on the breast longer. So how in the world do we know?

How Long Should It Take To Breastfeed A Baby?

Jada Shapiro, lactation counselor, maternal health expert and founder of boober, tells Romper, “Each child is different, but on average a newborn nursing session lasts anywhere from 5 to 45 minutes with the average coming in around 12 to 25 minutes in the early weeks.”

“As the baby gets older, some babies will nurse as quickly as 5 to 7 minutes per session, while others who are slower and enjoy taking more breaks may still take 20 to 30 minutes,” she says.

How Do You Know When a Baby Has Had Enough Milk?

Leigh Anne O’Connor, an IBCLC and La Leche League Leader says your baby may “pop off” the breast and fall asleep and stay asleep for a while until the next feed. She adds that you’ll know the baby is getting enough milk if the baby is putting out plenty of clear urine diapers and several yellow stools a day.

In fact, according to Healthline, infants should have at least 4 to 6 wet diapers per day, and by day 5 and onward, they should have 6 or more wet diapers.

Additionally, “As babies get closer to finishing their nursing session, the pace of the sucks and swallows significantly slows and spaces out, their hands become open (as opposed to tight fists when they are hungry), their arms and bodies become floppy and relaxed and their eyes flutter or close for longer periods of time,” Shapiro says.

Then there’s the act of cluster feeding to consider when figuring out average breastfeeding time and whether your baby is getting enough milk.

What Is Cluster Feeding And Does This Change The Amount Of Time Per Feed?

“Cluster feeding is when a baby takes many feeds over a period of several hours,” Shapiro says. “The feeds may be normal length or shorter, but many of them happen in a row so it can feel like you are feeding constantly for several hours, even though there were short breaks.”

Often with cluster feeding the first feeding may last longer and the subsequent feedings may be shorter, according to O’Connor.

“It is normal behavior and happens most often in the late afternoon or evening typically with a newborn. It can also happen over several days during growth spurts,” Shapiro says. “Because suckling signals the brain to make more milk, a baby will cluster feed sometimes to signal that the parent needs to increase production.”

However, Shapiro adds, “If a baby is nursing constantly over full day periods rather than just a few hours, a lactation consultant can help determine if there is a poor latch or technique in order to increase efficiency and reduce the amount of suckling time.”

You might find that your own baby’s average breastfeeding time changes over time, and that’s okay. Just keep an eye on those diapers and don’t stress.