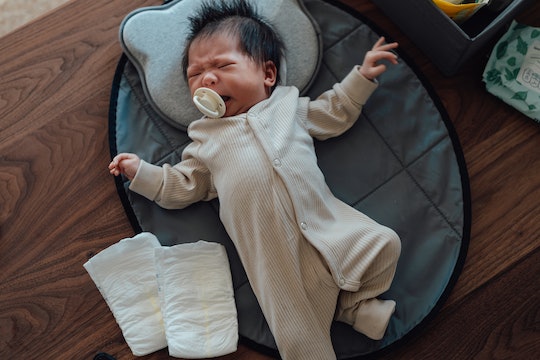 Here’s Why Your Baby Has A Raspy Voice From Crying

I know, they sound pitiful.

If your newborn has a witching hour of fussing, crying, and restlessness every night, you may have noticed they wake up a little raspy sounding for their next feeding. It almost sounds like they lost their voice, but while they may be hoarse from overusing their tiny vocal cords (even though they don’t sound tiny, that’s for sure), doctors agree they usually won’t lose 100% of their voice just from a crying fit or two. And thank goodness, because that just sounds pitiful.

Does Excessive Crying Cause Babies To Lose Their Voice?

“We rarely see a baby lose their voice from crying, but they can have hoarseness from vocal cord strain from crying,” says Gigi Youngblood, M.D., pediatrician at Children’s of Alabama, in an interview with Romper.

Christian Francom, M.D., is a pediatric ears, nose, and throat (ENT) specialist who oversees the Children’s Hospital Colorado Pediatric Voice Disorders Clinic. In an interview with Romper, he says your baby’s voice should come back just fine after a little rest.

“If your baby has a normal sounding voice that begins to sound raspy or hoarse after a prolonged bout of crying, the most likely cause is vocal cord strain. The good thing is this can often resolve on its own over a period of a few days if there are no further prolonged crying episodes. If your baby has crying episodes frequently, this can be a recurrent issue, but the voice should return to normal intermittently,” he says.

How Do Babies Lose Their Voice?

So, yes, while your baby can get a raspy voice from a long night of tears, it’s not very common for them to lose their voice altogether. In fact, there are several more likely reasons your little one sounds rough — postnasal drainage from a cold or virus can irritate their vocal cords, for example, and even lead to laryngitis.

"The most common cause is a viral illness that causes inflammation to the vocal cords and surrounding structures," says Matthew Wilber, M.D., pediatrician at Texas Children’s Pediatrics Pearland, in an interview with Romper. "This will usually be accompanied by symptoms such as runny nose, cough, sore throat, and possibly fever. The inflammation and hoarseness will resolve in a few days. Other less common causes include nerve paralysis, gastroesophageal reflux, trauma, or growths on the vocal cords from maternal HPV infection, among others."

How To Treat A Hoarse Voice In Babies

Francom says if your baby’s hoarse voice doesn’t go back to normal in a day or two, or if they have any other concerning symptoms, it’s best to call their doctor.

“Concerning symptoms associated with hoarseness would include high fevers, shortness of breath, increased breathing effort, noisy breathing, or hoarseness that never goes away,” he explains. “If your baby has these symptoms, he or she should be evaluated by a pediatric ENT where a tiny camera can be placed through the nose and used to look at the vocal cords. This is generally a well-tolerated procedure that does not require any sedation or medication, and can be performed on even very small newborns if needed.”

If you’re going to visit the pediatrician to figure out exactly what’s wrong, it can help to write down whether the raspy voice comes and goes, how long it lasts, or any other changes you notice.

If your kiddo is sounding hoarse, these docs agree it’s best to make an appointment with their pediatrician. They will be able to diagnose the source of the issue and help you treat it, or refer you to any specialists (like a pediatric ENT) that you may need.

Gigi Youngblood, M.D., pediatrician at Children’s of Alabama, in an interview with Romper

More Like This
Why Does My Baby Cough While Breastfeeding? Experts Explain
9 Bedtime Mistakes That Are Keeping Your Baby Awake & How To Fix Them
How To Tell If Your Newborn Is Nursing For Comfort
How Hot Is Too Hot For Babies? Experts Weigh In