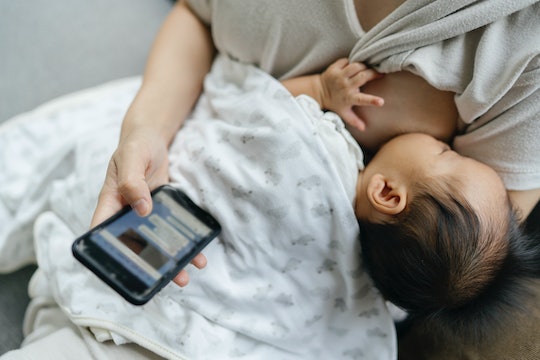 Beer & Breastfeeding: Everything You Need To Know

Expert answers to all your questions about beer & breastfeeding, because it’s not always black & white.

You’ve made it through your pregnancy avoiding alcohol all together, (or maybe having a few sips here and there), so it’s completely understandable that once the baby is born you may be craving a cold beer or a crisp glass of wine to go with all the other things you’ve been missing like sushi or soft cheese. But while the guidelines on alcohol and pregnancy are pretty clear-cut, the recommendations get a little murkier when it comes to alcohol and nursing. So what really is the deal with beer and breastfeeding?

Below you’ll find some general guidelines from a postpartum nutritionist, a lactation educator, and a pediatrician. And yes, because I know you’re wondering, you can have that cold frothy beer, you’ll just need to be mindful of when (and how much).

Can I have a beer while breastfeeding?

It should be mentioned upfront that the official stance from the Centers Of Disease Control (CDC) is that abstaining from alcohol altogether is the safest option for people who are breastfeeding. Keep in mind that this is the “safest” option, and not the only option, and skipping alcohol completely may not make sense or feel right to you. As a breastfeeding parent, you can definitely drink a beer, you just may need to wait a bit to nurse your baby so the alcohol has time to metabolize.

It’s sometimes thought that the percentage of alcohol in whatever you’re drinking is the same as the alcohol level in breast milk, but that’s thankfully not the case. In fact, some studies show that as little as two percent of total alcohol consumed enters breast milk.

“We know that the alcohol levels in breastmilk equal mothers’ blood alcohol levels. This may vary from woman to woman, and is also affected by how many drinks one has. The more alcoholic beverages you drink, the higher the levels of alcohol in both one’s blood and breastmilk,” Dr. Jessica Madden, board-certified pediatrician and neonatologist, IBCLC, and Medical Director of Aeroflow Breastpumps, tells Romper.

How long after having a beer do I need to wait to breastfeed?

Exactly how long it’s advisable to wait depends on a few variables like your weight, whether or not you were drinking the beer while eating food and even if you are ovulating,” Mindy Cockeram, certified childbirth and breastfeeding educator and author of Breastfeeding Doesn't Have to Suck: Tips, Tricks and Knowledge for a Great Experience tells Romper. (Interestingly, the body metabolizes alcohol more slowly during ovulation and on certain estrogen-based birth controls, meaning more alcohol enters the blood faster). But in general Cockeram says that 12 ounces of five percent beer would take the average height woman who weighs 150 pounds two hours and 14 minutes to metabolize, meaning the alcohol clears from breast milk completely. “I advise breastfeeding parents to have a drink after the baby has been well fed and you are not expecting to feed them again for two plus hours,” she says.

If mental math is not your strong suit (same), you can use a handy breastfeeding and alcohol calculator like this one from Katie Clark, a certified lactation educator and founder of The Breastfeeding Mama. It allows you to put in your specific weight and how many drinks you’ve had, so the amount of time you should probably wait to feed will be specifically catered to you. Keep in mind though that these calculators and most guidelines function under the assumption that a serving is 12 ounces of five percent beer; many craft beers or IPAs will be higher in alcohol than that, so if you’re drinking a bigger beer, you may not want to finish the whole thing if you’re planning to breastfeed soon after (sorry).

You’ve probably had a well-meaning person tell you that drinking a dark beer will boost your milk supply, and while there may be some truth to this, don’t start downing Guinesses just yet.

“Brewers Yeast (Saccharomyces cerevisiae) is an active ingredient that can be found in most beers as yeast is a necessary ingredient in the fermentation process,” Jennifer Jolorte Doro, clinical nutritionist, postpartum chef, and culinary director of Nourimama tells Romper. “Brewers Yeast is an active ingredient in most lactation products and is a well known galactogogue. Yet to date there is no peer reviewed study to show the true efficacy of its use in truly boosting production,” she adds.

Some studies have found that beer can stimulate prolactin secretion, and prolactin is a lactogenic hormone; but conversely, increased prolactin has no direct correlation with the volume of milk produced, according to literature from The Academy of Breastfeeding Medicine (ABM) Protocol Committee.

“It is theorized that the polysaccharides from the barley used in the beer fermentation process may stimulate the production of prolactin,” Cockeram tells Romper. “However the ethanol alcohol in beer has the opposite effect on milk production until metabolized and cleared from breastmilk.” IPAs and pale ales have the highest barley content but also a higher alcohol content, she says, and adds that if she personally was going to test the theory, she’d have a daily IPA and then wait at least two hours to feed the baby. “However, it’s important to remember that the American Academy of Pediatrics recommends breastfeeding women drink ‘on occasion’ rather than daily,” she adds.

And of course, beer is not the only thing that contains barley. You could try non-alcoholic beer, Cockeram suggests, or other “foods whose ingredients include barley (like soups, bread, brewer’s yeast and some cereals). Steel cut oats, oatmeal cookies and oat milk are also good alternatives,” she says.

Do I need to pump and dump after having a beer?

The concept of “pumping and dumping” is also sometimes misunderstood. Because alcohol enters your milk, it’s not like if you pump and toss out the milk, the alcohol is going to magically disappear immediately. You are not a keg afterall. “‘Pumping and dumping’ after drinking alcohol has no effect on how much alcohol will be present in your breast milk,” Dr. Madden says. The alcohol will naturally dissipate over time, and the only reason you’d need to pump after having a beer were if you were to become uncomfortably engorged.

“Breast milk is too precious to waste. Just put pumped milk in a pan and heat to just below boiling for 20-30 seconds,” Cockeram says. “Alcohol burns off at a temperature of 172 degrees fahrenheit (boiling is at 212 degrees). Then let milk cool and use, refrigerate or freeze. Milk banks put all their donated milk through a very similar process” Note that while this may work for you, not everyone agrees with the scalding milk method as a way to remove alcohol from breast milk. If you’re unsure about whether or not there’s alcohol in your milk, just like being over-served, the best thing you can do is wait it out.

Katie Clark, a certified lactation educator and founder of The Breastfeeding Mama

Mindy Cockeram, certified childbirth and breastfeeding educator and author of Breastfeeding Doesn't Have to Suck: Tips, Tricks and Knowledge for a Great Experience