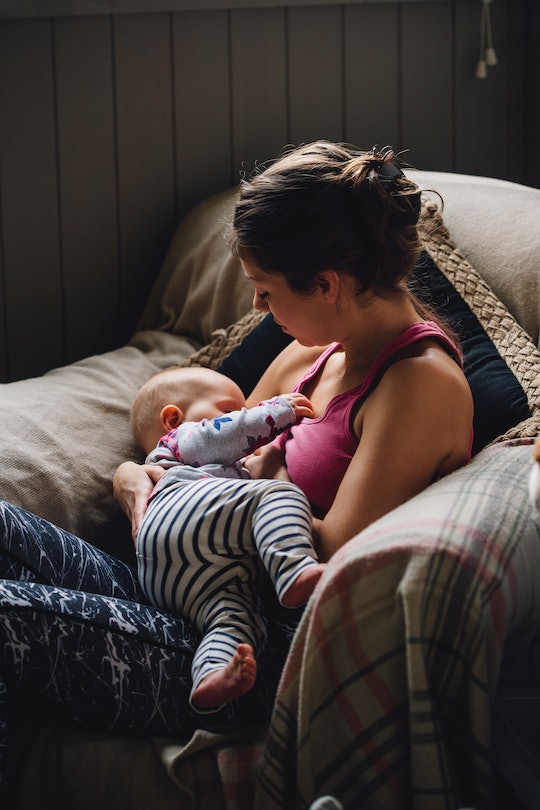 Can You Breastfeed With Nipple Piercings?

How to navigate the logistics of nursing with nipple jewelry.

Your breasts (and in particular, your nipples) led an entirely different life before you got pregnant. They probably experienced a whole lot of pleasure with your partners (or you know, yourself) — and then perhaps a pinch and some pain when you got nipple piercings. But now that Baby is on their way, you might be honing in on that horseshoe that’s dangling from your nip and wondering if you can breastfeed with nipple piercings. It’s a sensitive subject — literally.

Can You Breastfeed With Nipple Piercings?

Yes, you can breastfeed successfully with nipple piercings, though it can complicate things. If you’re had them for several years, you don’t have to give them too much thought. But if you’re thinking about getting pregnant, expecting, or currently breastfeeding, you’ll have to wait until you’re done breastfeeding. “Women can breastfeed after getting nipple piercings,” Rue Khosa, ARNP, IBCLC, a lactation consultant tells Romper. They do take about a year to 18 months to heal completely, so women should avoid getting pregnant during this time.”

Complications That Can Occur With Nipple Piercings

Even though you should be able to breastfeed, that doesn’t mean that things will flow freely. “There are potential breastfeeding complications caused by a nipple piercing which include scarring that could block some nipple pores,” Andrea Tran, IBCLC, a lactation consultant, tells Romper. “There could also be nerve damage, both which could potentially affect milk supply.” Decreased lactation in nursing moms who have nipple piercings has also been reported, since the milk ducts can become damaged.

But decreased lactation is only the tip of the, well, nip. All that breast milk has to go somewhere, and if it can’t exit your breasts, it can create an unhealthy build up that can morph into mastitis, according to Khosa. “The obstruction of milk flow can increase your risk for mastitis, especially if the piercings are not allowed to fully heal before starting the breastfeeding relationship,” she says.

Your nipple piercing can affect your baby’s ability to nurse

Whether it’s in the nipple itself or the areola, having an extra hole (or a widened one) might sound great to get the breast milk out and into Baby’s mouth — in theory. “Though it is unlikely to prevent a woman from being able to breastfeed successfully, the fistula (hole) created by the piercing may result in an unpleasant and unwanted repercussion,” says Khosa. “It might include a faster milk flow through the piercing holes, causing the infant to choke.”

And then, there’s the issue of potential infections. “There are higher risks of infection to the nipple area, and the type of jewelry used may be problematic when you have a nipple piercing,” Ashley Georgakopoulos, Motif Lactation Director and IBCLC tells Romper. There is already a 10-20% risk of infection from a nipple piercing, a PubMed study found, which might make it unsafe for your baby to safely nurse.

Can you keep the piercing in during nursing sessions?

Um, no. Not ever. “Lactating people should remove their nipple piercings for feedings in order to avoid the possibility of the piercing coming loose and being swallowed or choked on by the baby,” Jada Shapiro, a lactation consultant and founder of boober, tells Romper. Khosa agrees, adding: “Left in place, they can interfere with Baby’s ability to establish a good latch, resulting in maternal pain and inadequate or ineffective milk transfer.”

How to prevent infection

Even though you might think your barbells are beautiful, your baby’s safety comes first. “Because you feed so many times per day, in most cases this means that you'll want to remove your nipple piercings for the entire duration of your nursing relationship,” advises Shapiro. “If you do choose to put the jewelry back in after individual nursing sessions, it's very important to thoroughly clean and sanitize the jewelry first.” And in those bleary-eyed first few weeks of mommyhood, you might not have the time to shower, much less thoroughly cleanse your nipple jewelry.

If you already have a nipple piercing and are pregnant, you might want to think about removing it once Baby arrives. But if you’re playing around with the idea of getting a piercing, you may want to wait until your little one is fully weaned to schedule a session. That way, both your breasts (and your Baby) will be safe, and you’ll establish a good bond while breastfeeding.

Jada Shapiro, a lactation consultant and founder of boober