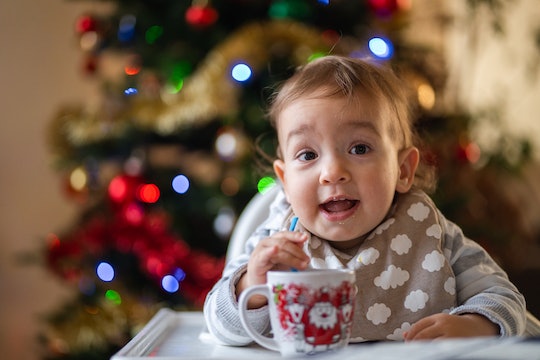 How To Introduce Your Children To The Joy Of Eggnog

Just leave out the actual "spirits" that make it merry and bright, OK?

To me, eggnog is the candy corn of the winter holiday treats. It's so polarizing — most people either love it or they hate it. I'm in the second camp, probably because I accidentally had my first taste of eggnog when I was 7 years old. My mom had a cup sitting on the coffee table and I thought it was my milk. Nope. It was definitely eggnog, and I definitely spit it out. I don't remember if there was anything "extra" in there, but I'm pretty sure there was. Obviously I survived, but if they actually like it, can kids drink eggnog as long as there's no alcohol?

Pediatrician Gina Posner tells Romper that after age 1, it's OK for kids to drink eggnog, as long as there are no raw eggs involved, because that can cause salmonella.

The FDA website noted that fresh eggs, if consumed raw, can contain bacteria called salmonella, which causes "foodborne illness," aka food poisoning. Apparently there are approximately 79,000 cases of foodborne illness and 30 deaths each year from consuming raw eggs that are contaminated with salmonella. "Consuming dangerous foodborne bacteria will usually cause illness within one to three days of eating the contaminated food. However, sickness can also occur within 20 minutes or up to 6 weeks later," the website noted. "Although most people will recover from a foodborne illness within a short period of time, some can develop chronic, severe, or even life-threatening health problems."

From a nutritional standpoint, Posner says that while eggnog isn't unsafe, it does have a lot of fat and sugar. So moderation is really key, and eggnog shouldn't replace your child's typical drinks of milk or water.

If you're looking for an egg- and alcohol-free, kid-friendly version of eggnog to give to your child, this recipe from Seeded at the Table is a lighter alternative, made with warmed egg yolks, milk, and vanilla extract, and it's a little lighter in the sugar department as well.

For a non-eggnog holiday treat, Posner suggests making a cinnamon tea with some honey if your child is over the age of 1 (because of the bacteria in honey). "Again, moderation is the key," Posner says. Hot spiced cider, hot chocolate, and all of the other warm festive drinks can be enjoyed with your children.

More Like This
Do Parents Really Need To Worry About Their Gas Stoves? Pediatricians Explain
Winter Travel Tips For Families
40 Valentine's Day Outfits Your Girls Will Adore Showing Off This Season
72 Hilarious Valentine's Day Jokes For Kids
What Parents Are Talking About — Delivered Straight To Your Inbox