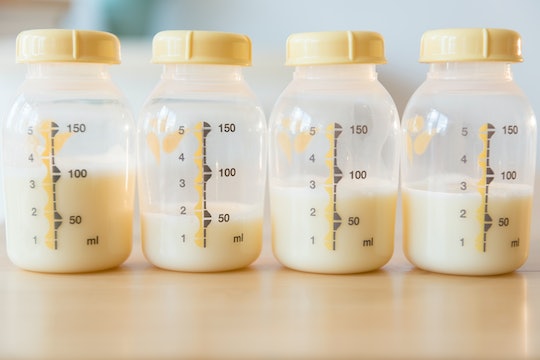 Can You Pump Into The Same Bottle All Day? Experts Weigh In

There’s a way to do it safely.

When you’re deep in the throes of pumping breast milk, some moms may experience a Gollum-like attachment to every drop. And because it’s such a hot commodity, you have to be incredibly careful about storing it. Safety is priority number one, of course, but convenience isn’t far behind which leads to the question: Can you pump breast milk into the same bottle all day?

“[You] can absolutely keep adding to the same bottle within that day’s time,” says Ashley Georgakapoulos, Motif Medical’s lactation director. That is, if you follow certain milk storage protocols.

How long can you leave freshly pumped milk out at room temperature?

Hear that, moms? You can relax if you spaced and left the milk sitting on the nightstand for a bit, it’s okay. In fact, you can grab this same bottle three hours later and continue pumping into it. Or, if you’re power pumping to increase your supply, you can pump into the same bottles multiple times within the four hour window.

Of course, it’s normal to feel worried about proper storage, which is why the Centers for Disease Control and Prevention (CDC) have spelled out milk storage protocols with an in depth “Human Milk Storage Guidelines” page so you can be sure to get it refrigerated in time, including the exact temps milk should be kept at on the countertop (77° degrees), refrigerator (40° degrees), and in the freezer (0° degrees).

To avoid the stress of having to toss milk, Georgakopoulos says you should follow the rule of four: “Four hours at room temperature, four days in the fridge.”

Can you pump into a refrigerated bottle, mixing fresh breast milk and chilled milk?

The Academy of Breastfeeding Medicine (ABM) warns against adding newly pumped breast milk to chilled milk; this warms up the cold milk and invites the growth of bacteria. To combine the portions, you'll need to pump into a new bottle, then refrigerate it and mix it with the older milk when it's cold enough. Refrigerated milk can be safely used within a 4-day period; depending on your baby's preferences, you can feed directly from the fridge, or warm it up in lukewarm (not hot) water.

Same goes for milk that you've already stored in the freezer after pumping. If you want to add fresh milk to a frozen batch, the safest approach is to thaw the frozen breast milk by refrigerating it or putting it in a warm-water bath, then pouring in the new milk once the frozen milk is at room temperature. Again, you'll need to pump the fresh milk into a new bottle, so you can't use the frozen milk bag or container for another pumping session. The CDC guidelines caution that moms should never refreeze breast milk that has already been thawed.

Can you pump into a bottle a baby has drank out of?

The rules change if you’re considering pumping into a bottle that Baby has drank from. In that case, you can’t pump into a bottle that has hit Baby’s lips, says Natalie Ward, a location consultant and owner of The Milky Mermaid, a practice that offers breastfeeding support and education.

“If a baby has drank out of a bottle of expressed breast milk, milk should not be pumped into that same bottle until it has been thoroughly washed by hand or in the dishwasher,” Ward tells Romper via email, explaining, “Contamination is definitely a possibility once baby's saliva has entered the bottle.”

“Any time there’s been a compromise and mixing with saliva or foreign bacteria, that changes the expiration date,” confirms Georgakopoulos.

If your baby doesn't finish a bottle of breast milk — whether it's a totally fresh batch, or a mixture of milk from separate pumping sessions — it's okay to serve the leftover milk again within two hours after the last feed. But if it's been more than two hours, dump it; the risk of contamination from the baby's mouth and the milk itself isn't worth it, per the ABM.

Naturally, this might lead to some waste. The best way to avoid this is to only pour out what you need into a separate bottle that you will give to your baby.

Can you pump breast milk into a bottle of formula?

Prepared formula, according to the CDC, can spoil if left out and needs to be used within one hour of when a feeding begins. Because of the chance of spoilage, mixing formula with breast milk means the bottle has a shortened timespan of use. If your baby doesn’t drink it all, you’ll inevitably have to chuck precious milk earlier than you may have had you kept the pumped milk separate from the formula.

So keep those rules in mind and, when in doubt, visit the CDC site or reach out to a lactation consultant for more guidance.

More Like This
Can You Burp A Baby Too Hard? A Pediatrician Shares Tips For Gassy Tummies
My Toddler Ate Play-Doh, What Happens Now? Don’t Freak Out
8 Tips For Christmas Travel With Kids To Keep Everyone’s Sanity In Tact
How Much to Tip Your Nanny Or Babysitter This Holiday Season

This article was originally published on Sep. 16, 2019