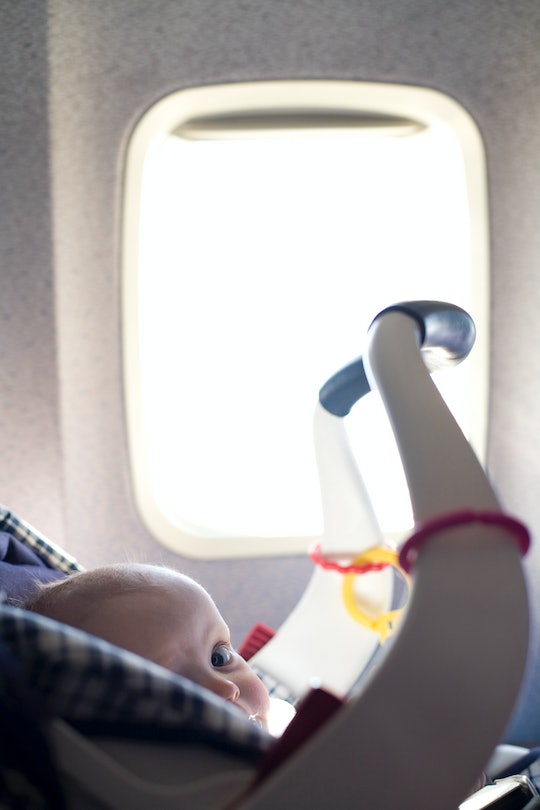 Psst. It's easier than you think.

Air travel these days can be challenging. There’s security to consider, mask rules to double check... now add to that picture a baby. If you’re traveling with an infant, you’re likely wondering how you can check a car seat on an airplane. Wherever your final destination is, you’ll likely need to board a car afterwards and that means baby’s gotta be buckled up. Do you beg, steal, or borrow a car seat on your trip? Or just add it to your luggage list? And what does that cost? Is it even worth the trouble?

How to Check a Car Seat On An Airplane

The first step in checking a car seat on an airplane is whittling down the rules and regulations of the particular airline you’re flying. The good news? Of the nine* U.S. airlines researched for this story, all offered complimentary car seat check-in. So forget worrying over charges provided you’re taking one car seat per child traveler. If you want to take multiple car seat options, you’ll likely be charged a fee for additional restraint systems, so pack wisely.

The next tip? Spare yourself the luggage stress by either putting your car seat in a clear plastic bag to protect all of its parts, or checking it right at the gate where it will have less distance to travel. The additional plus to this is on many airlines you’ll get it back at the gate, saving you time waiting at baggage, or, even better, allowing you to snap it into your stroller (which all major carriers also let you check for free) so you can swiftly roll out. Make sure you also put a baggage tag on your car seat so you don’t run into trouble claiming it after your flight.

Naturally, not all car seats are the same and if you have an extraordinarily hefty one, that could become a problem on some airlines. (And who wants to carry a super heavy car seat anyway?) Opt for a lightweight version and check the Federal Aviation Agency for a complete list of rules and regulations including the requirement that all car seats have “This restraint is certified for use in motor vehicles and aircraft" printed on it.

Pros Of Checking a Car Seat On An Airplane

Sounds easy enough, right? But you might still be wondering, is it really worth the trouble of taking a car seat on a flight, checked or in the seat? All nine airlines we checked not only allow you bring a car seat on board, they often they prefer it. This is the case with Southwest Airlines. In fact, the airline strongly encourages Child Restraint Systems (CRS, aka FAA-approved child restraining seats). While you can opt to fly with your baby on your lap, provided they’re between the ages of 14 days and age 2, a CRS is seen as a better option for a child’s safety regardless of their age.

And here’s another great pro-tip, some airlines, including British Airways and American Airlines, offer their own baby seat options. if you call in advance, you might be able to secure one of American Airlines inflight bassinets (sometimes called a sky cot). These are like mini beds that actually attach to the bulkhead so baby can rest. If available, you might skip the car seat altogether. But keep in mind, this perk is only available for passengers traveling in coach.

Cons Of Checking A Car Seat On An Airplane

Of course, there are downsides to checking a car seat or boarding with one. For the former, it’s a matter of extra gear you have to drag with you through a busy airport, a challenging predicament when your hands are likely tied up hanging on to your children.

The other con? If you take a car seat on board that means you must buy your child a ticket. Lap babies (ages 14 days to 2 years) fly free on all major airlines because, well, they’re on your lap and not taking up a seat. But a car seat requires you to buy a ticket which, it could be argued, negates the free factor.

The other downside? A car seat limits your seating options. On every airline checked, the car seat was required to go in the middle or window seat with many restrictions regarding placement within the cabin. For instance, you can’t put a carseat in an exit aisle. This also means that as a parent you’re most likely going to be sitting next to the aisle whether you like it or not. Some airlines also have restrictions regarding bringing car seats into premium seating areas. This is less about keeping cranky babies out of first class and more about seat design. “Many First-class and business class seats are designed in a specialized way such that a car seat cannot be properly installed,” Our Globetrotters reports. So always check with your airline first.

How Much Does It Cost to Check A Car Seat?

As previously mentioned, checking a car seat is free.

But, costs are a relative term when it comes to travel. The upside of taking a car seat — whether checking it or boarding with it — is you’ll have it when you land in your final destination and avoid fees for renting one while there. However, if your baby is young enough to sit on your lap (and you can stand it), you might save a lot of money by nixing the car seat and sharing a seat instead. Or checking your car seat for free, and sharing one seat. If you go with the latter, you’ll still have your car seat when you arrive, but you’ll have saved a boatload in fare.

If your child is bigger, however, this might not be an option. If a child is over the age of two, you have to buy them their own seat. But look at it this way, it’s probably worth it to provide them with the comfort of a car seat in their seat while you’re flying. They won’t be able to wiggle around and will be in familiar territory which will equal a less stressful flight for you.

We’re talking emotional savings, and who can put a price tag on that?