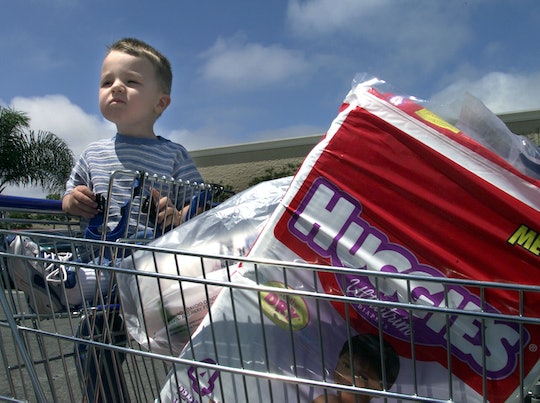 The Great Myth Of Child Support, Of The “Help” That Never Comes

The first time I found out that help wasn’t coming, I stood in line at Walmart trying to buy diapers with my debit card

“Does their dad help at all?”

Help. That’s the gut punch of a word. Help is a choice. A kindness. A lending hand when you’ve fallen in a ditch and you can’t climb your way out and then suddenly, suddenly, there stands your savior. Reaching out to pick you up. Like he wasn’t the one who pushed you down there in the first place.

When I left my husband with my four kids and my empty bank account and insides that were bruised and rotten and spoiled even if my outsides were fine, my mother was the first one to say it. To tell me not to expect any “help” from my husband. She knew, of course. She didn’t get much “help” either, but that was the ‘70s and ‘80s and things have changed. Dads “helped” now. How many stories did I hear when I was a bartender at a local pub about some man who was taken to the cleaners by his ex-wife over child support that she used on spa holidays and liposuction, dinners out and new men. How many afternoons spent serving pint after pint of overpriced imported beer, sympathizing with these poor men who always seemed to have the time and money to hang out in pubs for long stretches of sunny Saturdays without the children who, they told me, were their entire universe.

Help came with a smirk. Or a sigh. Or a reminder that I needed to get my life together.

I would not be one of these detestable women, no way. I would just expect my husband to “help” and what’s more, I would be grateful. For anything he gave me, and at first it came. Every second weekend I asked if he had anything to “help” me with and he would make jokes like “Uh oh here she comes, show me the money!” or “Did you just get your hair done? Now I know where my money is going.” and I laughed and acted like it was cute because I was so grateful. For the “help.”

I was being trained, you see. We are all trained maybe. To remember that I wanted these kids and they were mine first, always. Which yes, I’m going to admit I probably wanted. I wanted them and I didn’t want their dad and this was my choice. Just like it was their choice to help. Or not.

Help came at first, thin $20 bills slowly counted out beside the car window while I looked at the ground and just told myself, “Electric bill. Shoes. Two days of groceries.” It came when I explained myself. Explained that yes, I was working as a waitress but my paycheck wasn’t going to be enough to cover their soccer fee so if you could just cover that this one time I would be so so grateful. Help came with a smirk. Or a sigh. Or a reminder that I needed to get my life together. But it came.

Until it didn’t. Until a new girlfriend, until a new boyfriend, until a bad weekend where the kids acted up. It stopped then, slow and awful and silent. No words could bring it back and I tried.

If a man doesn’t want to help with his kids, that’s his choice. A cliche that is embarrassing to talk about because if you are the one who isn’t getting help you really should have known, shouldn’t you.

I did the things you are supposed to do. I got a lawyer that cost me $10,000 and had a support order issued and still, still the help never came. Because he changed his mind about the help. Because it was his choice, whether there was a support order or not. He could hide his money, he could work under the table, he could move in with his mother and have his paychecks deposited into her bank account.

The first time I found out that help wasn’t coming, I stood in line at Walmart trying to buy diapers with my debit card. He had offered his “help” with a check that bounced and I didn’t know. I’m sitting here with a red face looking down all those years thinking about how I didn’t know. I didn’t have enough money in my account for my baby’s diapers. The teller was awful, my God she was awful. Humiliated me even when I tried to explain what happened. My explanation made it worse. She called me “trash” under her breath. She called me trash. Not him. Me.

I’m the one who chose to be a single mom of four kids. I should have known better. Should have kept my man. I should have known what leaving meant. That my responsibility for my kids would get harder, deeper, worse, months and years of disappointing them no matter how hard I worked, and his would become multiple choice. Through the years he would buy a brand new car while the kids and I walked to the grocery store, to school, to the park. He would go on holidays, advance his career, have relationships, have more children and then leave those children and the world thought nothing of it. Thinks nothing of it. If a man doesn’t want to help with his kids, that’s his choice. A cliche that is embarrassing to talk about because if you are the one who isn’t getting help you really should have known, shouldn’t you.

No one wants to hear about child support anymore. It’s an old story. It’s boring and there’s something faintly pathetic about it, isn’t there?

No one wants to hear about child support anymore. It’s an old story. It’s boring and there’s something faintly pathetic about it, isn’t there? Something pathetic about asking for help. I feel pathetic now even writing about it. Pathetic. Something you don’t bring up in front of anyone, especially your kids, lest you look like the villainous divorcee of an ‘80s rom-com, bitterly poisoning her children with the truth.

Except. Except what do you tell your kids when you are working two jobs and gone all the time and bulk buying bags of frozen vegetables even as their dad has a new car, a new dog, a new house. How do you tell your kids that they have to take care of their own kids someday, whether they stay with their co-parent or not?

The truth is you tell them. You make them your little partners even if that’s not a great idea. You live somewhere cheap. You go without a car, you get your phone cut off sometimes, you put Christmas presents on layaway and pray every night that your tips will cover them.

The truth is, you don’t have a choice.