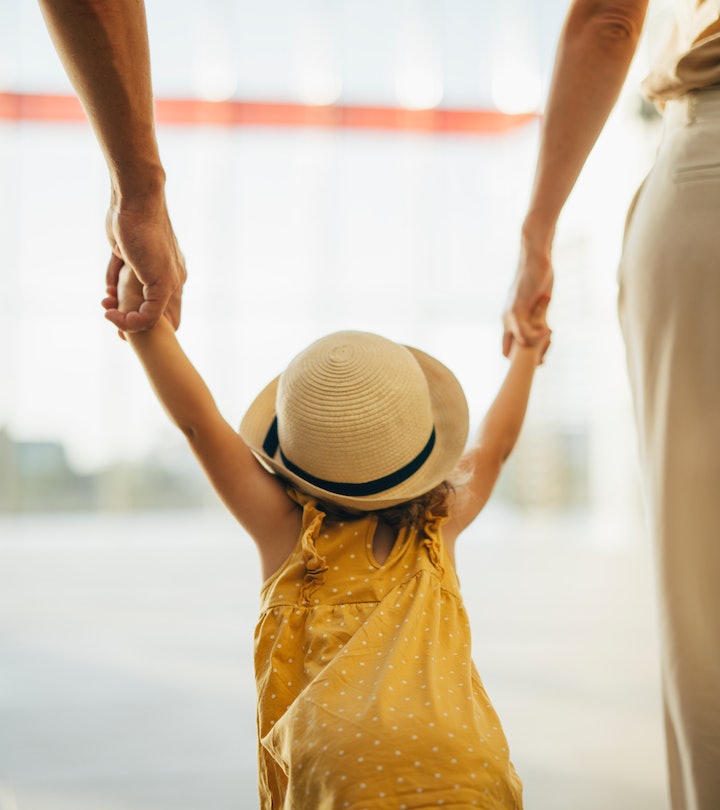 How To Set Boundaries With A Co-Parent, Because It Isn’t Always Easy

It's important to set emotions aside and put your child first.

Navigating the ups and downs of parenting isn’t easy, even when you’re contentedly coupled. What happens, though, when you’ve separated from your spouse or parted ways with your partner — but you still have children together? Creating co-parenting boundaries with your ex definitely isn’t easy, especially if things aren’t exactly harmonious or happy. (Or, in some cases, you want to claw each other’s eyes out.) How do you make it work so that it works not just for you, but more importantly, your child?

It's not so much that creating new ways to parent even when you’re no longer partnered are tough; it’s all those annoying emotions that go along with it that make things so, so, so much harder. “It becomes easier to set boundaries when you better understand the emotions behind them,” Praysha Spearman, LMFT, a licensed marriage and family therapist tells Romper. “Imagine your boundaries are like a fence around you: You get to determine the shape, size and distance of the fence around you at all times.” And that means being as consistent — or inconsistent — with your boundaries as you want to be.

But how do you even know when a boundary has been broken? Easy. Listen to your body. If you’re feeling tension in your shoulders or other parts of your body, or find your mind is swimming and you just want to scream, that’s your body telling you that your own personal boundary is being stepped on… and it needs to stop. “Usually, when emotions are running high, it is your body's way of letting your mind know, ‘Some boundary is being crossed’,” says Spearman. “It takes a bit of time and intentionality to determine which personal boundary has been crossed, in what way, and what an appropriate consequence might be if that specific boundary is crossed again in the future.”

How do you set co-parenting boundaries when you're in a new relationship?

Although it’s awesome that you’ve found someone whom you care for and respect, that doesn’t mean that introductions to your ex (or your kids, for that matter) should happen immediately. “It should be discussed with your ex ahead of time, before dating occurs, how and when exes are introduced to the new relationships,” Dr. Jaime Zuckerman, PsyD, a licensed clinical psychologist explains. “It’s also important that the new relationship does not interfere with existing custody schedules (switching days, appointments or extracurricular activities.” And above all, you and your ex must have a mutual understanding of the role in which new partners will play for the purpose of parenting style continuity.

It's understandable, though, that you might not want to share that you’re seeing someone with an ex that might be less than thrilled by the news. But you do need to let your ex partner know about your new love, because it’s in the best interest of both your current and past relationships, Dr. Lee Phillips, a psychotherapist and certified sex and couples therapist says. “When people are in a new relationship, they usually want to spend a lot of time with their new partner so things may shift with co-parenting responsibilities,” Phillips explains. “It may be helpful to have scheduled check-ins with your ex and your new partner by creating a boundary agreement and review and revise it when necessary.”

How to co-parent with a narcissist

When your partner places themselves first above everyone else (including your kid), it can make for some chaotic co-parenting. That’s why having (and implementing) some firm boundaries will be beneficial, according to Kiaundra Jackson, LMFT, a licensed marriage and family therapist. “Co-parenting with someone who has narcissistic traits and someone who has a narcissistic personality disorder are two different things,” Jackson explains. “When dealing with either or, it is imperative to control your emotions, not allowing them to gaslight you and to always stick to the details (nothing more).” You may have to remind them of the rules that you’ve both set and agreed upon, and try to Elsa it and “let it go” when it comes to small things.

It won’t be easy, for sure, but relationship expert Rori Sassoon says that all it might take is to help your ex realize that you’re both in this together, for better or worse (at least, the parenting part). “It may be beneficial to remind your ex that you’re playing on the same team for the kids,” says Sassoon. “The last thing you want is to negatively affect your children, from any petty behavior.”

Should you get co-parenting counseling?

If your ex is open to the idea, getting some counseling could work wonders for you as parents, and also as ex partners. “Working with a therapist who specializes in co-parenting counseling can help strengthen skills that support each parent,” Genevieve Altwer, LMFT, a licensed marriage and family therapist tells Romper. “Focusing on things like parenting styles, parent values, the child's health and wellness, and routines will help set the course for success.” But it doesn’t end there — having similar rules at home can also create some stability for your child, particularly when it comes to bigger-issue parenting topics such as social media usage, phone privileges, driving, as well as your child’s social life.

In order for counseling to be successful, though, you’ll both need to know your ultimate co-parenting goals before starting your sessions together. “Topics that are most helpful to be focused on should ultimately be determined by taking a closer look at both individuals’ goals,” says Spearman. “Perhaps one parent hopes to lighten the load by sharing responsibilities, while the other parent hopes to improve communication by decreasing the number of arguments. It becomes the counselor's job to help find triggers and stuck points that are holding these problems in place, and to identify useful communication skills that can help co-parents to navigate future interactions with one another.”

What are some examples of inappropriate co-parenting?

It might seem that there are more ways of inappropriate co-parenting than there are right ways. Ultimately, though, the one who suffers the most isn’t you, or your partner who might be trying to zing you, but rather your child. “Inappropriate co-parenting can be anything from bad mouthing the other parent to lack of communication regarding important information about the child’s appointments or school activities,” says Zuckerman. It can also consist of inconsistency in custody arrangements (i.e. not picking up at the scheduled time, cancelling on your kid, or constantly switching days), or even introducing your child to new dating partners.

But it, sadly, doesn’t end there. “Most functioning parents will try their best to be on one accord with the other parent as much as possible,” says Jackson. “However, some examples of inappropriate co-parenting can include: talking badly in front of or to the child about the other parent, bringing the child in on arguments or disagreements, using your child as a spy to report back about what the other parent is or is not doing and using the child to upset the parent.”

How to co-parent with a toxic ex

The toxic ex is a very real thing. Either you’ve heard of one, know of one, or (shudder) have one. Thing is, you’re going to have to make the situation work for you, so that it’s your child who suffers the least. “I would work on setting clear boundaries with them by keeping in mind that you are a healthy parent for your child/children; try not to get wrapped up into guilt that it is your fault because you have a toxic ex,” says Phillips. “Notice the mistake, move on and focus on parenting, because even though you know they are a toxic person, try to work with them as much as possible and ask for their feedback.”

“Ultimately the goal is to become very clear on your own emotions and boundaries so that you can share them with the other parent in an environment that is most considerate/safe,” says Spearman. “As you would with any other person, it is common courtesy to stay on topic when negotiating boundaries, and to communicate in a way that is clear, considerate and consistent.”

Setting up co-parenting boundaries with your ex will (hopefully) be easy as you both work to create a positive partnership that always, always puts your child first.