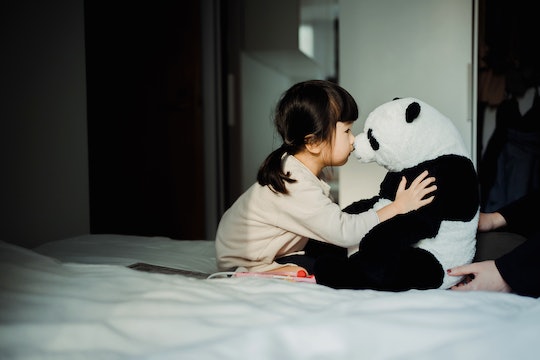 Toddler Language Is A Thing, But Not How You're Imagining

Most parents are interpreters for their toddlers, and there's a very good reason for that.

Sometimes I feel like I'm the only one who can understand my toddler, and I’m just his personal interpreter for people outside of our home — except when I pick him up from school and he's communicating with the other 2-year-olds. They all sound like they’re speaking with each other in another language, and it’s fascinating. But do toddlers have their own language, or is a series of babbles and expressive hand gestures enough to get their point across to other kids their age?

Dr. Nicole Magaldi, a professor in the department of Communication Disorders and Sciences for William Paterson University of New Jersey, tells Romper that the reason it sounds like toddlers have their own language is because of the jargon they’re using in the early stages of language learning. “Jargon is like babbling, except that it is slightly more complex and has the intonation of natural speech, so it can sound like they are having a ‘conversation’ when they are really using jargon,” she says. Magaldi says her own daughter used to use jargon when playing with her toys and it sounded like she was having a full-on conversation with them — even though she wasn’t actually speaking like an adult.

“Toddlers also make a variety of mistakes in their pronunciation of words, which can make them somewhat difficult to understand,” she says. “This is totally normal, though, a 2-year-old should only be intelligible — this means understandable — 50% of the time. Toddlers also use some approximations of adult words — baba for bottle. This is also very normal and can make it seem as if they are inventing their own language."

Brooke Hatfield, associate director of clinical issues in speech-language pathology for the American Speech-Language-Hearing Association (ASHA), says that oftentimes, young children are learning words they don’t have the motor skills to produce yet, and that’s why the word may sound like another language and/or be very different from the actual word. “An example is a toddler calling their sister ‘Deti’ instead of ‘Shelly’ — they simply haven’t developed the ability to produce the sounds to make ‘Shelly,’ but understand that this person they love has a name and they want to use it,” she says.

As far as toddlers understanding each other when using their “toddler language,” Magaldi says that toddlers really aren't more understandable to each other than they are to us. “Honestly, toddlers don't have many extensive conversations with each other beyond saying ‘mine!’ or making some simple requests to one another,” she says. “Children at this age often use what we call parallel play, which means they play next to each other, but don't necessarily engage one another directly all that often. As children get older, they become much more interactive and their play becomes more elaborate.”

Hatfield also adds that young children may process sounds made by other children differently than those made by adults, but kids are constantly taking in information to help them understand the world around them. So even if they look like they understand their toddler friends, know they still need some context and information to really "get it."

“As children gain experience with talking, these speech sound errors typically go away on their own and their speech becomes clearer and more understandable” and not like they’re speaking their own language, according to Magaldi. “But for some children, these articulation errors do not go away on their own and they will need speech-language therapy to address it. By the time children are 3 years old, they should be understandable about 75% of the time.”

Nicole Magaldi, PhD, a professor in the Department of Communication Disorders and Sciences at William Paterson University New Jersey, teaching coursework and published research in the area of child language disorders.