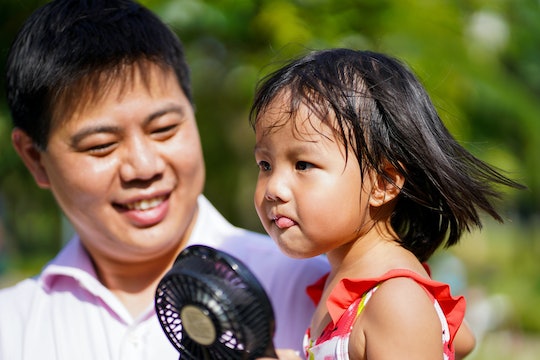 Everything You Need To Know About Heat Rash In Kids

What it looks like, how to prevent it, and why you shouldn’t totally freak out.

With warmer weather officially here, one thing parents should be more on the lookout for is signs of heat rash in their kids. While heat rash sounds (and sometimes looks) scarier than it is, it’s not something you want to ignore completely.

Heat rash, also known as prickly heat or miliaria, is basically the skin’s way of reacting to an accumulation of sweat, and occurs when blocked pores trap sweat under the skin. It’s common in very hot and humid weather, and can cause a rash that looks like a lot of tiny bumps surrounded by red skin. Although it’s not dangerous, it can be uncomfortable, especially for little kids who can’t communicate what’s bothering them. It’s most common in infants, but older kids and even adults can also experience heat rash.

The good news is that there are manageable ways to treat it, and even steps you can take to avoid it. Here’s everything you need to know about heat rash.

What Are The Signs Of Heat Rash In Kids?

The most obvious sign of heat rash is, of course, the actual rash itself. Pediatrician Gary E. Kirkilas with Phoenix Children’s tells Romper, “The rash consists of small blotches of pink or red skin. The skin often has a prickly texture to it, as well. Depending on the child’s skin tone, these prickly bumps may even have a clear or fluid-filled bubble-like appearance.” In some more intense cases, heat rash can also look like lesions or goosebumps on the skin, or have blisters full of pus.

Another way to help determine if what you’re looking at is heat rash, and not a different condition? Check out where it’s located. “Heat rash typically shows up on the head, neck, and upper chest,” Dr. Kirkilas says. It can also be found in the folds of your child’s skin, and can present itself as prickly or itchy.

If your child is exhibiting other symptoms along with a rash, it’s always a good idea to get in touch with your pediatrician.

What Are The Common Causes Of Heat Rash In Kids?

Excess heat is most often the cause of heat rash (as the name implies). But a particularly warm day isn’t the only possible culprit. As Dr. Kirkilas explains, “Anything that causes sweating, blocking or irritation of the sweat glands is a common culprit.” He notes that this can include exercise, an illness that prompted a fever, tight clothes or over-bundling, or even being tightly held by another individual, say while breastfeeding. Northwestern Medicine Kishwaukee Hospital pediatrician Mayuri Morker, MD, tells Romper that overdressing an infant can also lead to heat rash, since this can make them sweaty and hot.

What Are Some Remedies For Heat Rash?

Fortunately, heat rash is not typically serious and can usually be remedied at home. “Most cases of heat rash will resolve spontaneously by removing the offending agent,” Dr. Kirkilas says. “Usually this can be achieved by removing clothing and placing the child in a cooler environment. Dr. Morker also recommends leaving the affected area of the body bare in a cooler environment, and notes that you shouldn’t apply any skin ointments to it.

The heat rash should go away on its own, but if it’s not budging, it may be time to call a doctor. “If heat rash becomes persistent and problematic, contact your pediatrician as topical steroids like hydrocortisone can be helpful in some patients,” Dr. Kirkilas says.

How Can You Prevent Heat Rash?

You basically want to make sure your child isn’t getting too hot at any given time. Consider dressing your child in loose, breathable clothes when in warmer climates, says Dr. Kirkilas, and even keeping skin bare if the child is prone to sweating. Limit your time in hot, humid spaces, and try turning on ceiling fans to produce good air movement in occupied rooms.

At the end of the day, heat rash is preventable, and can be relatively easy to treat, so if your child develops it, there’s probably no reason to worry. But if you’re concerned, always turn to your pediatrician and healthcare providers for guidance.