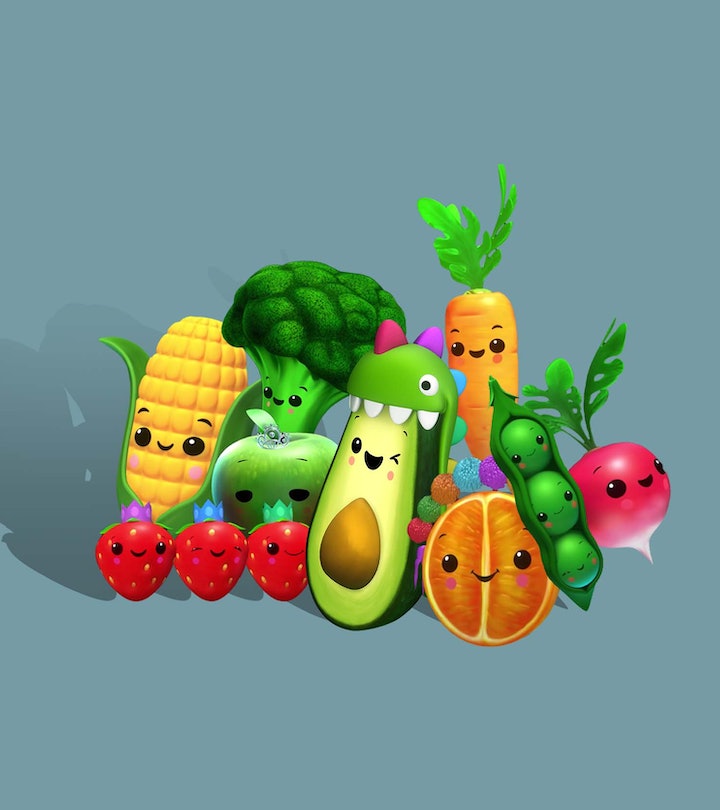 Because once you become a parent, these are your A-list celebrities.

It’s 5:30 a.m. and there’s a pineapple in a party hat dancing across the television screen in my bedroom. My 9-month-old son sits, transfixed, watching as radishes, strawberries, and more smiling, animated produce join the choreography.

This is “Hey Bear Sensory Birthday Dance Party,” and it’s the kind of thing you can’t believe exists until you become a parent. Now, the fact that I can pull up these videos on YouTube, anytime, for free, makes me feel like there must be a benevolent God, because their adorable dance numbers are what buys me 15 minutes to summon my will to live, especially now that we’re up before the sun (yet again).

You see, my baby is capital-O obsessed with Hey Bear Sensory videos. I caught wind of Hey Bear on TikTok while I was pregnant, and when my son was 3 months old, the memory of it came flooding back during a particularly rough day. He was inconsolable, having another round of acid reflux, and we’d tried everything. That was the first day “Funky Veggies” came to our rescue, the bear and his groovy vegetable friends calming our baby down instantly. And we’re not the only family who feels like we owe this channel our sanity.

Hey Bear has more than 750,000 subscribers on YouTube. The hashtag #heybear has 10.9 million views on TikTok. Hey Bear’s Instagram highlights are full of photos of birthday parties themed after their videos. But powering all of this behind the scenes is not the massive team you might imagine. In fact, all of the animation, music selection, and promotion, come from one U.K.-based couple: Wayne and Lucie Johnson.

Wayne and Lucie describe themselves as two creative people who were stuck in jobs they didn’t enjoy. He was designing environments for computer games; she was in the hair industry. When iPhones first debuted and the App Store became a thing, Wayne took the leap into creating and self-publishing apps, the first of which was a game designed to teach kids phonics inspired by the couple’s oldest daughter, Elizabeth. By the time iPads were on the market in 2012, Wayne and Lucie had welcomed their second child, Anna. Anna loved black-and-white sensory books, so the parents then created a sensory app for other moms and dads. They recorded a video of the app to use as a demo, and before long, it took off on YouTube. That’s when the potential for starting a YouTube channel first became clear.

“People were leaving comments saying how much they liked it, so it happened organically,” Lucie said. “We noticed the video was getting watched on YouTube and the App Store downloads were slowing down, so we thought, then let’s have a go at making some videos.”

The channel’s name was inspired by a BBC documentary in which a park ranger is greeting a family of bears he’s familiar with in the forest and calls out, “Hey, bear.” The light-heartedness of that moment is exactly what Wayne and Lucie hoped to weave into their videos. “We thought it was funny as we were watching it. But I was really inspired by the way he was toward this family of bears. It was comforting and caring. I just loved the way he said it. I was like, ‘We’ve got to call it Hey Bear.’”

Wayne and Lucie worked on the video occasionally after work for years. The first produce-themed video was posted in 2019, after the idea came to Lucie on a walk. She was on a diet at the time, and all the focus on fruits and vegetables meant she had avocado on the brain.

“My main inspiration was in Grease, where he's singing to Sandy and in the background is the drive-in cinema and you can see the little hot dog.”

Wayne wanted to try more three-dimensional animations anyway, so he started on Lucie’s avocado idea. “The first avocado had little black arms and legs, and I was trying to animate his hands and everything, and trying to get him to walk along,” said Wayne. “My main inspiration was in Grease, where he's singing to Sandy and in the background is the drive-in cinema and you can see the little hot dog.” After some trial and error, the pair agreed that the closer the avocado looked to the real thing, the better.

The costumes worn by the fruits and veggies in the birthday video are inspired by things Lucie has seen children wear to real parties with her girls, and they’re meant to look homemade. “The headbands, glasses, the materials are things that I think people can actually get in real life without having to buy a branded version. I like the outfits to look like they've been crafted as well so they’re something that somebody could make themselves,” she said.

“I’ve never really liked nursery rhymes. I would sing them with the kids at a playgroup but they’ve always been...a bit of an irritant. [Our kids] used to love the same music we would listen to — more house, disco, or hip-hop.”

When it comes to the actual process of making videos, nothing is outsourced. Lucie handles the video concepts and developing narratives, while Wayne focuses on the animation itself. “To get something that takes 30 seconds in the video, I might have done 40 test renders in order to get it to that stage,” said Wayne. “The light might have been bad or the animation was too fast. When something looks simple it normally means that it's taken a really, really long time to do it.”

One Hey Bear video takes four to five months to create, from conceptualization to posting on YouTube. All of the “acting” involved in telling a story with fruit that doesn’t speak, while dancing… well, these things take time. This is especially true when you want kids to be able to pick up on a relatable moment.

Parents love Hey Bear because it’s a reprieve from the mind-numbing nursery rhymes or repetitive theme songs characteristic of most children’s shows. Lucie shared the story of a mother who wrote to her, saying that her son with autism spectrum disorder said his first word, avocado, after watching Hey Bear videos with his mom. While Lucie gives full credit for that milestone to the mother interacting with her child, she said facilitating that time together is why she and Wayne try to make content parents don’t dread putting on.

“We’ve always listened to music together as a family,” said Lucie. “I’ve never really liked nursery rhymes. I would sing them with the kids at a playgroup but they’ve always been something that I found a bit of an irritant. Elizabeth and Anna used to love the same music we would listen to — more house, disco, or hip-hop. It makes sense to me to put that into those videos, and then it's something that, as a family, you all enjoy together.”

There will always be other shows teaching your kid how to count. Hey Bear just wants to teach them how to have fun.

Moving forward, the Johnsons want to explore new themes outside the beloved dancing fruits and vegetables. They also plan to build more narrative moments into each video, like the apple nervous to attend the party who’s then pulled onto the dance floor by her blueberry friends. But don’t worry: Wayne and Lucie aren’t going to start adding dialogue. Both said they want their videos to appeal to people no matter what language they speak, and to stand out from other children’s content by using dance as a storytelling technique.

“Besides, you give the pineapple a voice now, and 50% of the people would hate the voice, wouldn't they?” Wayne joked.

Whether it’s another fruit video or something new, Hey Bear’s videos will still focus on happy characters you can find in real life, good music you don’t mind hearing over and over again, and concepts that are inclusive to kids of all languages, ages, and abilities. “We've gone on this journey that we didn't really expect to go on. It’s about positivity, happiness, good, diverse music, and encouraging movement. And it might be a little silly,” Lucie said. “You think you have to be this perfect parent, your child has to be able to read, to do this and do that, and not every child is ready to do that. It’s as important, I think, for a child to learn how to be happy.”

There will always be other shows teaching your kid how to count. Hey Bear just wants to teach them how to have fun.

More Like This
The Morning Rush Is Parenting At Its Most Essential
If Serena Williams Can’t Have It All, Who Can?
When I Travel, My Baby Sleeps In The Hotel Closet
The Disappearance Of Children’s Recreational Sports