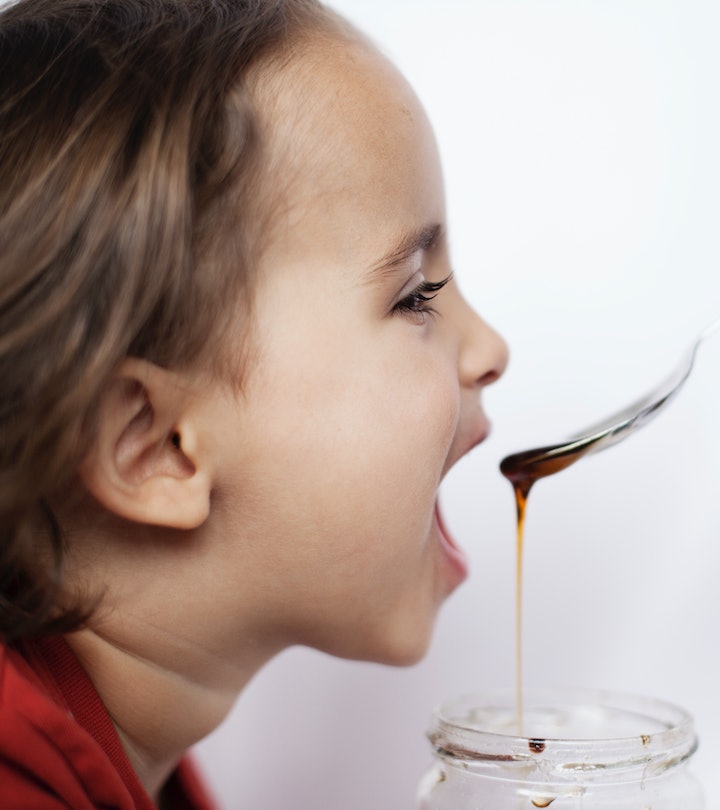 If you’ve had a sick kid in the last few years, you’ve likely been told that, instead of rushing out to to buy cough syrup, you should stock up on honey instead. Though it sounds like a natural remedy from a book your great grandmother would have turned to (or something from a fairy tale), in fact, honey has become the recommended treatment for kid coughs. But why does honey stop coughing? Is honey for coughs really better than over-the-counter (OTC) cough medications? And is honey for toddler coughs really, truly going to help them sleep at night when they’re fighting a cold? How much honey do I give for a cough, and does it matter what kind of honey? We asked a pediatrician to explain the magical, research-backed power of using honey for coughs in kids.

“Pediatricians recommend honey as a treatment for cough because it works! Studies show that honey works better than traditional ‘cough medicine’ in reducing nighttime cough symptoms,” says Dr. Elisabeth DiPietro, pediatrician at Hyde Park Pediatrics. Although it sounds too good to be true, that something lurking in your cupboard next to the peppermint tea and brown sugar could actually be as effective as over-the-counter medications, a 2012 study published in the journal Pediatrics concluded that honey does indeed seem to help with kid coughs, particularly at night.

Plus, there’s another upside to using honey for kid coughs instead of other meds. “Honey also does not have any side effects or risk of toxicity or overdose of traditional cough medicine,” DiPietro explains. Unlike OTC cough medicines containing dextromethorphan — which a 2004 study published in the journal of Pediatrics found to be ineffective for kids — there’s no harm in giving it to a child over the age of 1, and there may be some benefit.

However, there is one caveat. If you have a child under 12 months, step away from the honey jar. “Honey should not be given to children under the age of one due to the risk of infant botulism,” DiPietro reminds.

Why does honey stop coughing?

The short answer is, doctors aren’t sure why honey seems to help kids cough less. Though these studies have found honey to be more effective than a placebo, they haven’t unraveled the reasons why just yet. “Though we are not completely sure how honey works, it is syrupy and sweet and can coat the throat to help suppress your child’s cough.”

The American Academy of Pediatrics (AAP) also suggests that honey seems to be good at treating coughs in kids because it thins mucus and “loosens the cough.” We’ll call it yet another form of bee magic, for now.

What type of honey is best for a cough?

Many people assume that raw honey would be best — when it comes to natural remedies like honey, one might assume that you’d want to find the purest form possible. However, as to what kind of honey is best for coughs, DiPietro recommends that parents reach for pasteurized honey, just to be super safe. And, that 2012 study that started it all actually tested three different types of honey — eucalyptus honey, citrus honey, or labiatae honey — to see if there was a difference in efficacy. They found that all honeys seems to serve the same function, and give kids (and their tired parents) a little break from all that coughing.

How much honey do I give for a cough?

As to the correct dosage of honey for a cough, DiPietro suggests parents “give their child 2.5 - 5 milliliters (or 0.5-1 tsp) of honey, either straight or diluted in warm water, lukewarm tea, or even juice.” The AAP suggests that for children over the age of 1, anywhere from two to five milliliters is appropriate. For the metric-system challenged, five milliliters is just a bit over one teaspoon.

There’s nothing sweeter than indulging your child in a little treat when they’re sick, and few toddlers ever said “no” to a teaspoon of honey at bedtime. Offering honey for a cough certainly doesn’t hurt — as long as your child is over 1 year old — and seems likely to offer some benefit.

More Like This
A Parent’s Guide To Stomach Pain In Kids
Do Parents Really Need To Worry About Their Gas Stoves? Pediatricians Explain
Amoxicillin Rash: Is It Really An Allergy? Doctors Explain
Viral Hives In Children: What Doctors Want You To Know
What Parents Are Talking About — Delivered Straight To Your Inbox