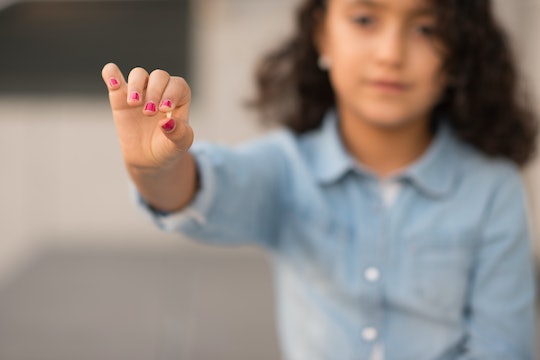 What Does The Tooth Fairy Leave These Days Anyway? 10 Parents Share

From tiny toys to foreign currency, the Tooth Fairy has a wide range of gifts to put under a pillow.

Do you leave $1 or 5? A small toy, or a glittery, handwritten note? Tooth Fairy traditions can vary widely, with some families making it into quite the production, while others simply slip a few bucks under the pillow and call it a night. I reached out to a few parents to share their Tooth Fairy secrets and how they handle what is perhaps one of our stranger parenting rituals, and they are all so different.

I remember when my son lost his first tooth, and I excitedly explained how a magical, winged creature was going to fly into his room at night and rummage around under his pillow while he slept, then steal this small part of his body that had just fallen out of his face. And as I heard myself relaying the tale, I watched my son’s eyes widen, and heard how completely bonkers I sounded.

The story of the Tooth Fairy is a bit weird. It was originally created as a way of making the whole tooth-losing process fun for kids, and a little less horrifying than it actually is. Because let’s be real: losing teeth is kind of upsetting. And for the very little, the concept of losing something they had assumed was quite permanent can trigger a whole load of questions and anxieties. Does this mean my fingers will also fall off? My eyelashes? WILL MY PENIS FALL OFF AND BE PLACED UNDER A PILLOW?

Also, losing teeth can be painful. And bloody. So, the idea of the Tooth Fairy is a way of making this strange, slightly gross biological process a bit more pleasant. There are Tooth Fairy traditions all around the world. In Egypt, kids throw their teeth into the air. In Mongolia, teeth are wrapped in meat and fed to the family dog. (And I have to say, hats off to the parents who came up with these ideas. No Etsy-sanctioned hand-carved tooth trays required, or trying to make a calligraphy “My First Tooth” diploma at 11 p.m. at night. It’s either toss the tooth or feed it to the hounds.)

Of course, as with all family traditions, there is no right or wrong way to do the tooth fairy. (I mean unless the tooth fairy leaves the child medical literature on gum disease. I think that might count as wrong.) I had some parents give us the scoop on their own personal Tooth Fairy protocol.

"We leave Hexbugs. I don't know how this got started. I think I was just trying to think of something small and fun that we could slip under her pillow. When our daughter lost her first tooth, she didn't have any understanding of money or its value, so we wanted something more fun for her. You can get a pack of five bugs for around $20. I know another family who leaves a new Hot Wheels car for every tooth. It's just something simple and easy, and a little more fun than a dollar bill." — Liz

"More often than not, I end up in my daughter's bed because she wakes up and calls for me in the night. I sleep in a mouth guard because I grind my teeth, and when I wake up I sometimes stash it under the pillow of wherever I've slept — yeah, you can see where this is going. So one morning I'm out making some coffee, and I see Morgan just standing there looking totally confused. She holds up my mouth guard and asks why the tooth fairy left her something so gross? It was pretty funny. I was like, 'I'm sure the fairy left something else!' and went and helped her find her new Shopkin, which I'd also stashed under the pillow." — Kelcie

"We go all out for the tooth fairy. I get these awesome pillow gifts from this site called Hold the Magic. They have stuff like teeny tea sets and tiny binoculars, and each gift comes with a note from the fairy, and a little gold bag to put the stuff in. They even include fairy dust to sprinkle. I also go in in the night and put up a small pink fairy door in their room. The girls get a huge kick out of it, and it makes it all very exciting." — Emily

"When it came time for the tooth fairy, I turned to Etsy, as I do for a lot of kid stuff like this as I am not really creative in that way. I found this shop that sells a bag of coins from 20 different countries. Since our son is really into maps and geography, this was perfect. So far he's gotten coins from Hong Kong and Russia. He loves it." — Meredith

"Addie has lost most of her teeth really late. And because she's 9, I honestly didn't think she still believed in the tooth fairy. Cut to one night when she asks me when the tooth fairy will ever be back, because her teeth all just kept falling behind the bed. Turns out, she'd been putting her teeth under her pillow, and then waking up to nothing. I felt horrible! I asked her why she didn't say anything and she said she just thought the fairy was really busy. That night I left $20, a Babysitters Club book, and a note from the tooth fairy thanking her for her patience during the tooth fairy's 'busy season.'" — Alaina

"Alex did not like the concept of the tooth fairy at all when I first explained it to him, and seemed kind of freaked out by the idea. He did not want the fairy in his room. So we hung a note on his door directing the fairy to please leave his treat under a pillow in the living room. The fairy respected his request, and left $3 and a new Beyblade on the couch for him." — Lesley

"We don't make too big a deal out of it really. We just put $5 under the pillow and keep it simple. I guess that's kind of boring by today's standards, but it's what my parents did with me." — Ryan

The Tooth Fairy Gets Creative

"We haven't had a chance to use it yet, but my mom gave me this adorable tooth passport book. The child can write down when and where they lost their tooth, and color in a little diagram of what tooth it was. It's really cute. So I plan to leave that under Wyatt's pillow when he loses his first tooth. After that, I'm not sure what the fairy will bring." — Sarah

"We recently had the experience of our son losing his tooth one evening while we were all quarantined. I'd been exposed to COVID at work, and our whole family was essentially locked down at home. We had absolutely nothing in the house for the tooth fairy to leave. I didn't have any cash or treats or anything on hand, and there wasn't enough time to order anything. My husband actually suggested leaving a note from the tooth fairy saying she was also under quarantine. I ended up leaving a check for $10 and a note promising an extra 20 minutes of screen-time. It wasn't all that magical, but Leo seemed happy enough." — Annie

"I leave one of those big lollipops from Dylan's Candy Store. It was meant to be kind of a joke, like the fairy was trying to help the tooth-losing process along. Maybe not my greatest idea ever, as those lollipops are huge and really are bad for your teeth. But there you have it." — Edel

More Like This
6 Hacks To Make Your Kid's Lingering Cough Go Away
Tips For Apple Picking With Kids
Here’s How To Keep Your Baby Safe When Their Older Sibling Is Sick
Can Elderberry Help Prevent Illness In Kids? Doctors Weigh In