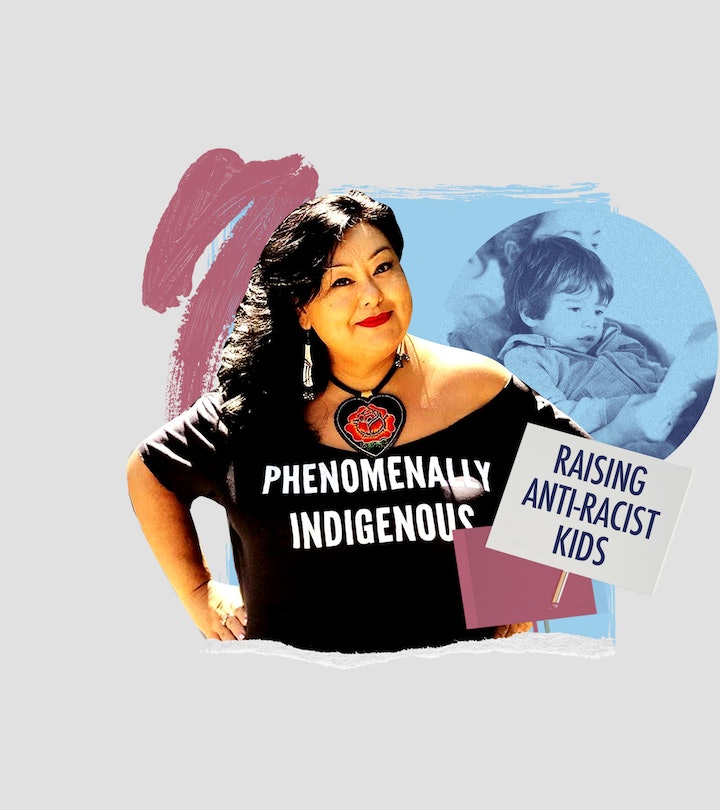 “To be able to teach kids that we are still here is a powerful tool.”

“As an Indigenous person, really every day is Indigenous Peoples Day,” says Gina Jackson, a Western Shoshone and Oglala Lakota activist, educator, and mom. “While it’s one day that we can uplift to greater society and try to bring education and awareness, we do this every day, honestly.”

I recently spoke with Jackson, who is the co-founder and co-CEO of the Return to the Heart Foundation, an Indigenous-led organization that provides grants for Indigenous women-led initiatives, about how parents, specifically us non-Native parents, can explain Indigenous Peoples Day to our kids — along with concepts like land acknowledgements and colonization. This day is a day of celebration, acknowledgement, reverence, and reflection. Many kids have a day off of school, but they might be confused about why, exactly, they do, and what it’s all about. Other kids’ schools don’t even recognize this day at all, instead sticking with the egregious practice of celebrating Christopher Columbus.

In addition to her work with the foundation, Jackson’s wealth of knowledge comes from her vast experience in early childhood education, her training as a social worker, and her former career working in an elementary school. She also worked on groundbreaking Indian Child Welfare Act (ICWA) guidelines and regulations and then later joined the Obama White House Community Solutions team. And, of course, she’s a mother — this work is personal, not just for herself, but for her family. “When my son was in school, he was probably the only Native, maybe there might have been one or two others in the whole school,” she tells me. “And he had long hair — the significance of long hair for boys is it’s their strength. The first day of school he came home crying, saying that kids don’t like Natives at his school. And I said, ‘What do you mean?’ He said, ‘That’s what they told me. We don’t like Natives at our school.’”

Within the year, Jackson’s son wanted his hair cut. “That was devastating to me as a mom, but I did allow him to cut it,” she says. “But those are things that Native kids have to experience and go through. And it’s commonplace.”

To be able to teach kids that we are still here is a powerful tool.

No kid — and no mother — should ever have to feel like that. Below, Jackson shares actionable guidance for us parents that’s helpful not just today, but throughout the year.

“I think for children — actually for everyone — visibility of Native people or Indigenous people is not something that’s on people’s minds because folks blend,” Jackson says.

Jackson pauses for a second and then continues: “I went to New York City about 15 years ago with my cousin who’s like a sister and her daughter. They both had long hair past their waists, and folks were wanting to touch their hair. We were wearing Native jewelry, and they were asking, ‘Are you Native American?’ And it was surprising how many people were saying they had never met one before. Yet, New York City has one of the highest populations of Native people, but they’re blending in, they’re invisible. And so for us, visibility is everything.”

I asked Jackson where non-Native parents can start when having these conversations. “I would start right where they’re standing,” she says. “Where are you located, and who are the original people of this land? Learn about those people.” She recommends the website native-land.ca as an easy tool to find out who were the original people of this land.

Teach children that Indigenous people are still here — and their legacy is everywhere.

“To be able to teach kids that we are still here is a powerful tool,” says Jackson, who lives in Nevada. “And it’s a powerful tool to do not just on Indigenous Peoples Day, but on any day possible. A lot of places back East have Indigenous names for their cities, and towns, and streets, and places, yet there’s no recognition that it actually is an Indigenous name.”

Take this opportunity to think about some of the town or street names right near you, and talk to your kids about the reason those names exist, like Minnesota and Massachusetts.

However, when it comes to land acknowledgements, those statements that recognize that a building or institution exists on land and territory that rightfully belongs to Native peoples, Jackson is torn. You’re most likely familiar with them from the bottom of some folks’ emails; your child’s teacher or school principal might even use one. Jackson fears that a land acknowledgement may be the beginning and end of many people and organization’s engagement with Native history and life.

Jackson tells me the story of a friend’s child whose classmates told him, ‘You’re not Native because all the Natives are dead.’

A connection to local tribes is important.

“For example, if you’re headed down to, say, San Diego, just do a quick Google search about Native American events in San Diego,” Jackson recommends. “And see if there’s an actual Native gathering. Is there a powwow then, or is there something happening where you could bring the family to experience and meet the people of the land in that area?”

You can also, of course, do this in your own home state, right now.

Check your assumptions about Native people at the door.

“I went to a powwow back East, and I was really surprised, because I’m from Nevada and the tribes here are pretty solid — we haven’t experienced colonization as long as the tribes back East. It hasn’t been 500 years for us here in Nevada. I could probably say two great-grandmas ago we were living traditionally and off the land. It’s a lot fresher for us,” Jackson says. “But when I went back East and I went to this powwow, I was shocked that the people, the dancers, the natives looked very light complexioned, often blond hair, but still wearing regalia. And I was, wow, I was having this conflict internally. And what my mom told me was that, ‘Gina, one of the most powerful things that you can do as a Native woman is to acknowledge another Native person who may be struggling.’ And so I always remembered those words. I would even expand it to: One of the most powerful things that a person can do is acknowledge a person in their Indigeneity.”

“Tribes are all different,” says Jackson, who recommends the children’s show Molly of Denali as a starting point to “to learn about one region of people.”

“Visibility is everything,” says Jackson.Return To The Heart Foundation
Molly and her mom at the Denali Trading Post.PBS Kids
1/2

Kids may have their own misconceptions about Indigenous people — about how they are “supposed” to look, or even about whether they still exist. Jackson tells me the story of a friend’s child whose classmates told him, “You’re not Native because all the Natives are dead.”

Having honest conversations with kids is important: What does your child think of when they hear the words “Native American” or “Indigenous”? What Native American people are they familiar with — from history, from the current culture, or from your own community? Books and age-appropriate shows and movies can be a great way to get these conversations going and expand kids’ understanding and awareness, to foster that important visibility that Jackson talks about. At the bottom of this article, there are some great kids’ books suggestions to get started.

How to talk to kids about colonization.

“We’re celebrating that we’re still here despite colonization,” Jackson says. “When you unravel this — and I think it’s important, even with kids, to have that true, honest conversation — [colonization] really was all about greed. It was all about wanting to take land and resources that weren’t their own and using whatever means, including people, humans, as capital to get wealth. And so when we’re teaching values to children, we need to be valuing one another, and our land, and our earth, and our water as caretakers, not as consumers and takers.”

Jackson recommends using simple examples, like asking children, “Has somebody ever called you the wrong name, and how did you feel about that? What if you told them, ‘No, that’s not my name,’ and they say, ‘Ah, that’s OK. We’re going to call you the wrong name anyway, forever’?”

“As Native people, Columbus thought he was in India, so he called us Indians and that was wrong,” Jackson says.

What kids learn in school is not the whole story.

Jackson stressed the importance of teaching kids that what they learn in school isn’t always the full story. It’s important to seek out knowledge as a family on your own. She recommends the children’s show Molly of Denali as a good starting place for young kids. “Tribes are so different all across America and this is a chance to learn about one region of people, so that children just know that there are differences.”

Jackson also loves the Smithsonian Institution and National Museum of the American Indian, NMAI, which both have resources especially for kids, including online resources.

The Denver Library has a great list of children’s books by Indigenous authors.

Raising Anti-Racist Kids is a biweekly column written by Tabitha St. Bernard-Jacobs focused on education and actionable steps for parents who are committed to raising anti-racist children and cultivating homes rooted in liberation for Black people. To reach Tabitha, email hello@romper.com or follow her on Instagram.