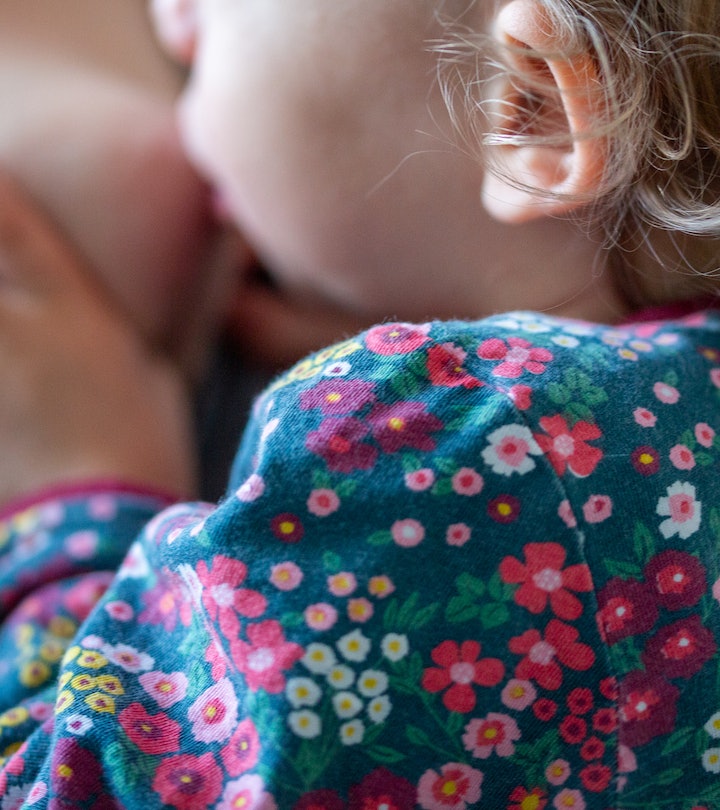 I Breastfed My Kids For Over 2 Years, & I Still Think The New AAP Guidelines Are Obtuse

Without hope of structural support, this puts even more pressure on women and their bodies at the worst possible time.

The new breastfeeding guidelines released by the American Academy of Pediatrics are intended to support women nursing children for two years, up from the previous one year. But even as someone who breastfed longer than that — and longer than I ever intended — you can count me among the people who got a little riled up.

I should know. I weaned my son exactly one month before the guidelines were published. He was 26 months old. I weaned my daughter exactly a year before that, three months before her third birthday. I breastfed for almost four consecutive years. Without hope for structural support to make longer breastfeeding possible, these guidelines are placing even more pressure on women and their bodies at the worst possible time.

When my daughter was born, I never thought about breastfeeding as a choice. Baby books espoused its benefits. Everyone’s registry had a Boppy pillow. The guilt-inducing hospital posters reiterated the (debatable) notion that “breast is best.” Of course, I had to do what was “best.”

People’s impressed comments filled me with pride; I never paused to doubt the societal pressure that led me to make that decision.

But nobody — not my doctor, not those baby books, not the advice I’d received from other moms — prepared me for how hard it would be. I didn’t anticipate those anxious, early days watching my daughter lose weight as I waited for my milk to come in. I didn’t know I’d pump until my nipples bled because I developed postpartum preeclampsia and was hooked up to an IV drip of magnesium sulfate that made it impossible to nurse. I lay limp in the hospital bed, determined to pump because I didn’t want to “fail” at being a new mom, and watched as my husband bottle-fed my daughter that red-hued milk because every ounce counted (and Google promised me it was safe).

At the end of my 24-hour drip, the nurses told me I was the only “mag mom” they’d had who breastfed exclusively after being resubmitted to the hospital. Their impressed comments filled me with pride; I never paused to doubt the societal pressure that led me to make that decision.

After leaving the hospital, I struggled like all new parents do. How do you get your baby to sleep? How do you calm those cries? Breastfeeding became my default answer. It was the only part of new motherhood that I thought I was getting right. But there were still so many things I didn’t know. I didn’t know that my milk would leak through my shirt when I returned to work as a private tutor after six weeks because I was self-employed and didn’t have access to paid leave. I didn’t foresee that she’d eventually reject bottles and starve herself until I was home. I didn’t know she’d develop acid reflux at four months and never sleep and that breastfeeding was the only thing that would comfort her. She was also still struggling to gain weight, and I felt the pressure of her needing every ounce.

On her first birthday, I was six weeks pregnant, and the pressure I’d felt from those posters and baby books should have disappeared. After all, I’d done it! I’d reached the milestone they recommended! But my daughter still wanted to nurse. Even though she was happily eating solid food, she still seemed to need the extra calories and comfort of breastfeeding. And it was still the one area of parenting where I felt like a success. My supportive OB-GYN said it was fine to try and breastfeed during my pregnancy. She said that it might be too painful. I might need to stop. But she also said that she wished that she herself could have breastfed longer than a year and was dedicated to helping me if I wanted to try. I was lucky to have her as an advocate because no one else understood.

In fact, it was right then that the pressure to breastfeed turned into pressure to stop. My husband was tired of hearing me complain about something that I was choosing to do. My pediatrician did exactly what I feared when he came into the room after my daughter’s 18-month vaccines and he saw I was nursing her to calm her down. After he walked out, I heard him in the hallway telling the nurse, with a tone of disbelief, that I was breastfeeding my daughter over my pregnant stomach. I never discussed it with him again, even though my daughter continued to breastfeed for over a year after that.

My grandmother repeatedly echoed the often-heard sentiment, if they’re old enough to ask for it, they’re too old. My family’s beloved rabbi said the same thing to me. So I stopped talking about it. I didn’t breastfeed in public. If anyone questioned me, I’d recite the World Health Organization’s recommendation to breastfeed for two years. I’d decided that would be my cut-off. (Spoiler alert: my daughter disagreed, and it wasn’t.)

When my son was born in March 2020, I began tandem breastfeeding my newborn and my 19-month-old. I didn’t know anyone who had breastfed two kids at the same time, so I once again found myself frantically Googling, reading articles on Kellymom.com, and highlighting passages in books by the La Leche League. Every two hours I’d feed my son, rocking him in his nursery and staring at the literal yellow wallpaper while my daughter watched another episode of Daniel Tiger and my husband attempted to work from home.

My daughter still asked to nurse, and I didn’t want to take away that comfort at a time when she was losing everything else in her world — preschool and story time and visits with her grandparents.

We were completely isolated and locked down. I was terrified of Covid and terrified of engorgement. One round of mastitis was so bad that I saw a breast specialist. It turned out I would be fine with antibiotics, but she thought I’d be even better if I stopped breastfeeding my 2-year-old. I didn’t. My daughter still asked to nurse, and I didn’t want to take away that comfort at a time when she was losing everything else in her world — preschool and story time and visits with her grandparents. Instead, I became an expert at using an electric toothbrush to relieve plugged ducts and gave up any attempt to pump. Months passed. I never left my house. And, like many women with young children during the pandemic, I “decided” to stop working. For these reasons, my son breastfed for over two years without ever having a single bottle.

One reason the AAP claims they released their new guidelines is to decrease the stigma for moms like me who breastfeed longer than one year. That would have been nice; maybe my pediatrician would have been more supportive and the healthcare I received for plugged ducts would have been less judgmental. But to me, just as important: more education about the realities of breastfeeding and support from the beginning. The AAP acknowledges the need for policies to support their recommendation: paid leave, private pumping and milk storage availability at workplaces, and universal break times. But this structural support isn’t happening for many women. Last month, the PUMP Act, which aimed to expand such workplace protections for breastfeeding on the job, failed to pass the Senate.

Receiving these highly-publicized guidelines increases the burden of what it means to care for a baby at a time when reproductive choices are being limited. This pressure increases “mom guilt” at a time when maternal mental health is already at extremely low levels because of the pandemic. This pressure ignores the reality of what it’s actually like to breastfeed in this country, at this time.

My relationship with breastfeeding was always a double-edged sword. There was a privilege to the unique bond and relationship it gave me with both of my children, but there was also everything it cost: time, flexibility, and my autonomy. The price was hard for me to pay — and I know that for many women, especially without legal and emotional support, it will be virtually impossible.

More Like This
Here’s How Many Calories You Burn When Nursing
Does Pumped Breast Milk Have Antibodies? Experts Weigh In
How To Tell If Your Newborn Is Nursing For Comfort
Why Does My Baby Cough While Breastfeeding? Experts Explain