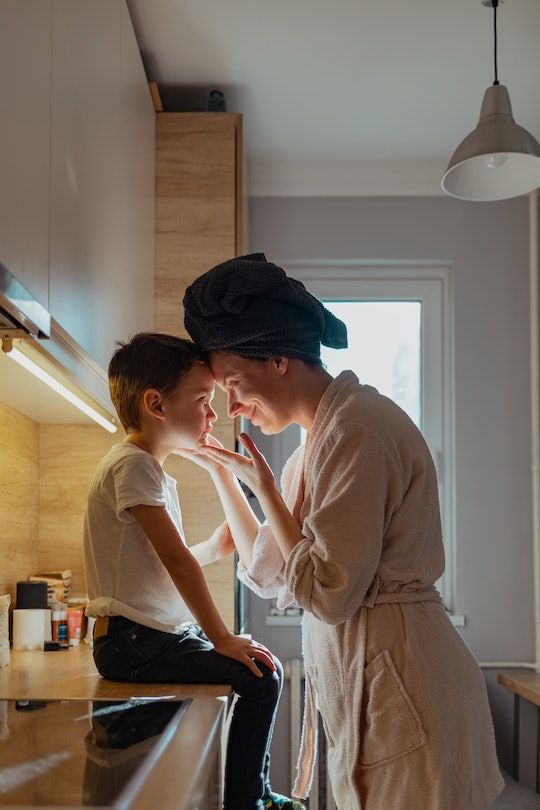 But now my son has given it back to me.

It started with my first boy. He was born and he was mine so what difference did his last name make to me? Even if my heart did a little skip thing when the nurses first slid that cue card into his clear crib with “Baby McGuire” written on it. Even though I think my last name would have sounded just so perfect with his first name and even though his dad and I weren’t married or anything. I knew I wasn’t allowed to pick. Not unless I wanted the dark shadow of capital-F feminism cast upon me. That crooked finger the men in my life pointed whenever a woman was too much of something. Too bossy, too insistent. Too loud. I didn’t want that finger pointed at me then, a 21-year-old kid, really, who still wanted everyone to like her.

I asked the nurses to change his name. His father nodded tightly with that look that says, Good girl, good girl.

I kept being a good girl through my three boys, all of them mine, all mine. I kept not caring that none of them, not one of them, had my name. Part of it was that I didn’t know I was allowed to care, that no one said to me, not even once, How about they have your name? I was focused on the first name since I was allowed to help with that one. Mostly. So long as they weren’t too girly or silly or off the wall. So long as I stuck to the rules.

So it was partly that I didn’t know I was allowed to care and partly I really didn’t care at all. It’s not like my last name is mine. Not really. I have had a few last names in my life and they were always from a man. My mom’s first husband, my grandfather, my own husband later. My last name was a cue card in a clear plastic holder getting crossed out over and over depending on who loved me. Depending on a man loving me.

It bothered me more when they got older. When their faces stopped looking like me. When they stopped being little ducklings following me everywhere, no question where they belonged. No question they were mine.

It didn’t bother me much. Not at first. Not until my four boys, the two oldest with one last name and the two youngest with another and none of them with mine, needed permission slips. Calls to teachers. Passports. Then that little heart-skip thing came back but more like a clench now. We were on our own, you see, their dads living in their own houses in their own towns with their own new kids. But we still had their names floating around our house even if they weren’t.

It bothered me more when they got older. When their faces stopped looking like me. When they stopped being little ducklings following me everywhere, no question where they belonged. No question they were mine. All of a sudden they felt like they belonged to their name. Like they were part of this whole separate long history that had nothing to do with me.

Their different last names, their beards, their maleness, all started to make me feel untethered. When they were little, they felt to me like children first and boys second. Mine, mine, mine most of all. But then they started to become men. Men with histories, with legacies, with teeny tiny dynasties attached to their name. They were becoming Mr. Someones, and I was still deciding whether my name meant anything at all.

I started to actually think about my last name. Really think. This last name is the one on my birth certificate, the one my own mom gave me when she was 19 years old and having a baby on her own who would be me. My last name is hers, was hers. It was the name we shared when we were just we two. It was the name that carried us both home to my grandparents’ house without a dad for me or a husband for her. It was the name of my grandpa, father of six daughters and singer of Irish folk songs and best friend to me. This was the history of my little name. My family with no lands to pass down, no great shakes at anything in the history books as far as I know. It was the name of Sunday pot roast and hours of playing chip rummy and gossip sessions in the bathroom and homemade donuts on Christmas morning.

It was me and my mom but not my boys. Because I was so afraid of being called a capital-F feminist by men who might not like women very much that I shut my own voice down before they even had to tell me to be quiet, be smaller, be less.

And so I raised four boys to be someone else’s; sons to everyone but us. I raised them to be Mr. Someones, their father’s heirs, lining up for their legacies. I had given up my chance to raise my own sons; this is what it felt like in the middle of the night when the house was dark and I felt lost to them. All of our good work together, our pumpkin carving, our movie nights, felt like forgeries. I wanted them to have my name but I said nothing. I swallowed and swallowed and swallowed.

I was a good girl, a really good girl.

I didn’t fight for my name.

He wants his children to carry his mother’s name. Not because he’s trying to be too bossy, too insistent, too loud. But because he is my son.

My son has decided to take my name. On his own, without a whisper of a word to me. He told me on a drive to the beach, our beach. The same stretch of sand on Lake Huron where we’ve been swimming and napping and playing since he was born. The windows were down, he was driving. We had iced coffees and we weren’t saying much. The Milk Carton Kids were singing “Monterey” on the radio. All of a sudden he said to me, “I think I want my last name to be McGuire.” Right away my training kicked in and I said, “You don’t have to do that,” like he had offered to pay for lunch or coffee or something.

He shook his head, his face in profile to me, sunglasses on. Cool. His grown man’s face that is also still my boy’s face in all the best ways. “This is what I want. I’ve thought a lot about it.”

He was not afraid of being called a capital-F feminist. He was a little afraid of hurting his dad’s feelings, but more than that, he wants to be my son to the whole wide world. They all do. He wants his children to carry his mother’s name. Not because he’s trying to be too bossy, too insistent, too loud. But because he is my son.

He is taking the cue card out of the little plastic holder. He is writing on it “McGuire” in permanent ink. For me and for my mom and for his own someday-child maybe. And he is sliding it back into place for me. Because I couldn’t. And he can.