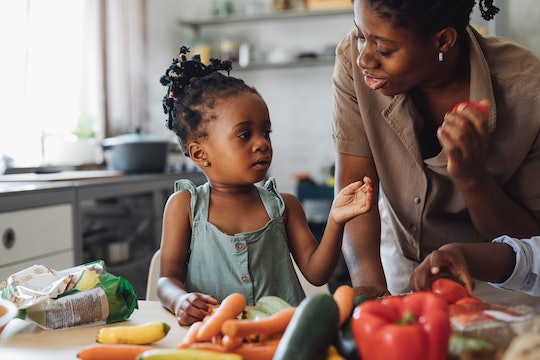 Lunch Meat Is A Safe Option For Your Kid’s Lunch

But only if it’s stored properly, a dietitian says.

Everyone has heard about the long list of foods that aren’t safe for pregnant women, from alcohol and sushi to soft cheeses and deli meat. When it comes to cold cuts and charcuterie, parents-to-be are told to avoid them to prevent listeriosis, a condition caused by food-borne bacteria that can cause serious complications in pregnant people.

So, if it’s not safe to eat deli meat with a baby on board, what about when that baby has their own body? Is deli meat safe for kids to eat, or should you stick to peanut butter and jelly in their lunch box? A study by Consumer Reports found that listeria monocytogenes, which are the bacteria that can cause listeriosis, were present on many store-bought deli meat products, but safe food storage is key to prevention.

“If you’re serving any sort of fresh foods or previously packaged foods you’ve opened, like deli meats, tuna, yogurt, cooked eggs, or soft cheeses, we always recommend sending a cold pack or ice pack in an insulated lunch bag to ensure it’s a safe temperature when they’re ready to eat it,” says Lisa Englander Landes, MPH, RD, clinical dietitian at Children’s Hospital Colorado in an interview with Romper. “Something safe at any temperature would be a peanut butter and jelly sandwich, tuna still in the packet or can, harder cheeses, and things that are generally shelf stable.”

So, if you store your lunch meat safely — with proper refrigeration — and heat it before serving it to young children (or keep it in a cold, insulated lunch box for school-aged kids), listeriosis is avoidable. Without the worry of contamination, you're only left with, well, everything else. Consumer Reports says deli meats contain nitrites and nitrates, which are worth raising an eyebrow at.

“Nitrates and nitrites prevent bacterial growth and give deli meat its dis­tinc­tive color and flavor. But there’s a downside. Nitrates convert to nitrites, and when nitrites interact with protein, that creates compounds called nitrosamines — which may cause cancer,” the outlet reports.

The outlet also reports that, in their survey of deli meats, a few other concerning compounds were found in high levels:

“In general, what we recommend for our families is a balance in the kinds of foods they’re taking in. Deli meats definitely fall into the category of, as far as the risks that have been researched and associated with the preservatives, those are looking at folks with very high intakes of these foods. We try to stress for our families to work within their food budget and get a variety of foods,” she says.

That said, there are some choices you can make while you’re in the grocery store that will ensure your kiddo isn’t exposed to some harmful ingredients.

“If it’s possible to buy nitrite- and nitrate-free meats, research does indicate those are probably better for us,” says Englander Landes. “One of the go-to brands we recommend that is widely available is Boar’s Head meat you can buy at the deli counter rather than the stuff that’s already packaged.”

So, as long as you’re shopping consciously and packing them properly, lunch meats can be a healthy protein boost to your child’s lunch or after-school snack.

“Make sure you’re picking foods from all categories and let your kid help you pack them,” says Englander Landes. “It’s a great thing to pack fresh fruits and vegetables, meats, eggs, and cheeses for your kid. It just might take a little extra preparation to get them to school and keep them at a safe temperature.”

This article was originally published on Aug. 11, 2017